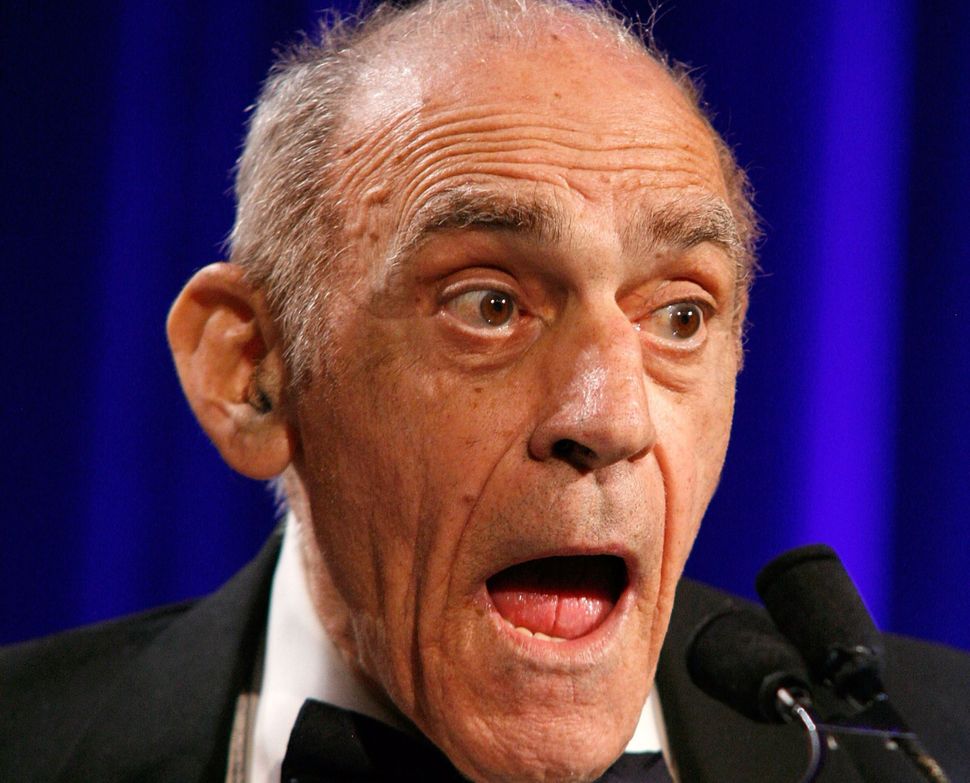 The joyous, life-enhancing aspect of Abe Vigoda, the performer of Russian Jewish origin who died at age 94 on January 26, was reminding us that good acting creates an image different from reality. Beloved for such roles as the moribund, hunched-over Detective Fish in the TV sitcom “Barney Miller” and pranked by “People Magazine” which alleged that he had died back in 1982, Vigoda was in reality a sturdy jogger and habitué of Brooklyn handball courts.

Vigoda’s stamina was such that for decades he good-naturedly appeared on late night chat shows spoofing his premature demise, and relished being embraced by youth culture, as when he appeared in 2013 at a Phish concert in Atlantic City, dressed as a wombat. He was helped onstage by two people, negotiating various obstacles and using a cane for extra support, but once spotlighted at center stage, he danced with vigorous conviction.

The Phish song “Wombat” with its lines, “It’s kinda like the theme from the Fish TV show/ You know, with Abe Vigoda” was not the only contemporary reference to this actor. The Beastie Boys’ “Posse In Effect” included the boast: “I got a girl in the Castle and one in the pagoda/You know I got rhymes like Abe Vigoda.”

Vigoda, a Russian word meaning “benefit,” easily rhymes with other words, and Vigoda the actor worked well with others too. This was true even in thankless jobs such as a 1951 Motorola commercial on TV’s “Four Star Revue,” where as a husky cab driver, he was teamed with Jimmy Durante. Delivering ungratifying commercial spiel praising Motorola products with every sign of glee and zest, Vigoda conveyed joy to be performing with Durante, himself the veteran of a vaudeville comedy and music trio with two inspired Jewish performers, Lou Clayton (born Finkelstein) and Eddie Jackson (born Jacobs). Vigoda’s careful observation of Durante, Eddie Cantor, and other ex-vaudevillians on “Four Star Revue” proved useful decades later when he was cast in provincial revivals of Neil Simon’s “The Sunshine Boys.”

Beyond Vigoda’s sharp-witted talent for comedy, there was a solemn source of his artistry. For his contribution to an anthology edited by Alan King, “Matzo Balls for Breakfast and Other Memories of Growing Up Jewish,”, Vigoda offered a perhaps surprisingly straight-faced recollection: “When I go to the synagogue today, there is a deep feeling that this is my heritage, this is my people. I am very much moved. It brings me back to the little boy who was bar mitzvahed.”

For all his whimsical antics on TV, Vigoda was essentially a serious person and actor. In a lengthy stage career – he only became famous in his fifties in “Barney Miller” – he incarnated John of Gaunt, Duke of Lancaster in Joseph Papp’s production of “Richard II,” intoning the noted speech about “this scepter’d isle.” In it, he explained how British Kings’ “Christian service and true chivalry” are renowned as far away as the “sepulchre in stubborn Jewry,” or Jesus’s tomb in Jerusalem.

One instance of Vigoda’s own stubborn Jewry was to follow Paul Muni and Edward G. Robinson in the long line of Jewish actors who unforgettably played Italian gangsters onscreen. As Salvatore Tessio in “The Godfather,” Vigoda was at once an old school, reliable mentor and lethal betrayer of Michael Corleone. Conveying utter reality and barely concealed thuggish menace with a smile that might quickly turn into deadly violence, Vigoda was so convincing that film extras who were genuine minor underworld figures could not believe that he was a thespian, rather than a real thug walking through the part.

Issues of reality versus appearance also entered Donald Freed’s “Inquest,” a 1970 documentary play on Broadway about the trial of Julius and Ethel Rosenberg. Playing a number of small roles, including an FBI agent and bailiff, Vigoda was directed by Alan Schneider alongside George Grizzard and Anne Jackson as the Rosenbergs. Another eminent director, Harold Pinter, guided Vigoda in support of F. Murray Abraham in a 1968 Broadway production of the Holocaust drama “The Man in the Glass Booth,” in which a Jewish businessman may or may not be a Nazi war criminal in disguise.

After these somber productions, America took Vigoda to its heart as a comedian in “Barney Miller,” starring Hal Linden (born Harold Lipshitz) and directed by Noam Pitlik. The show sometimes crystallized as a two-character piece starring Vigoda and the droll Japanese-American actor Jack Soo, as Detective Nick Yemana. The decrepit aura of Vigoda and Soo, with monumental bags under their eyes, affectionately reflected the rotting refuse heap of New York City in the 70s and 80s, and their prototypical turns as ancient detectives exhausted by a trip to the lavatory set the stage for Jerry Orbach’s later much-acclaimed performance as the sometimes-fatigued Lennie Briscoe in TV’s “Law and Order.” The spinoff “Fish,” despite the cheery urban funk of its theme song, proved a less durable success.

Did comic roles hijack the possibility of more serious stage or screen creations for Vigoda? If so, he never seemed to regret his relatively belated career success, and a lifetime of playing menacing or tragic parts — which also included the Mad Animal in a 1967 Broadway revival of Peter Weiss’ “Marat/Sade” – would have revealed only one facet of his talent. Besides, as all accomplished actors know, comedy can be a greater challenge than the serious stuff. In a 1980s Broadway staging of “Arsenic and Old Lace,” Vigoda commanded the spoof role of Jonathan Brewster, a takeoff on Boris Karloff, in cahoots with the majestic actor William Hickey as Dr. Einstein, a sub-Peter Lorre role. Although panned by a dyspeptic Frank Rich, this staging suggests that just as gilt-edged casting can assign a sublimely accomplished actor to a minor role, so in life some people seem almost overly talented for confronting challenges. Abe Vigoda was one such person.