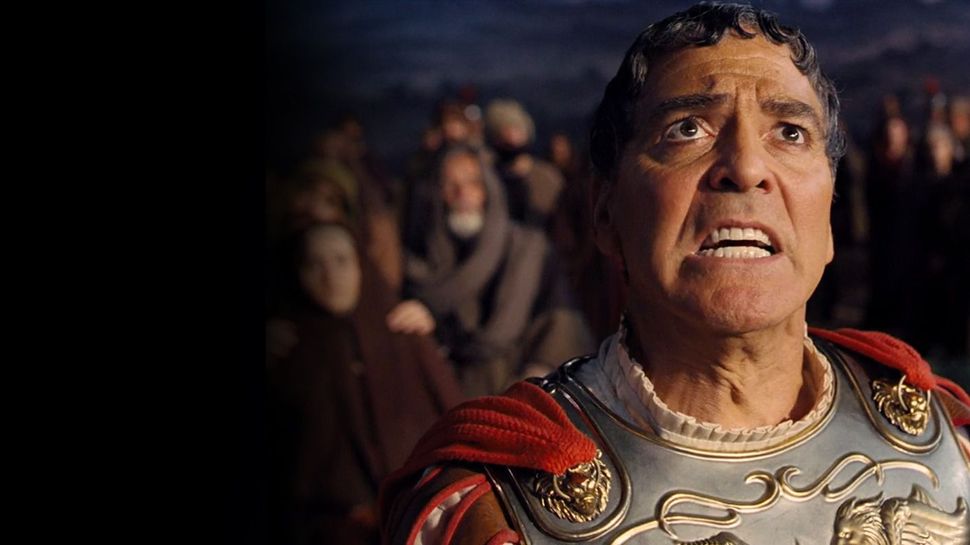 To the Coen Brothers, we are all fools.

Jut take a look at their characters: There’s the pretentious and deluded playwright Barton Fink in “Barton Fink”; hard-luck schlemiels like Larry Gopnik (“A Serious Man”) and Llewyn Davis (“Inside Llewyn Davis”); and entire casts of nitwits in movies such as “Raising Arizona,” “O Brother Where Art Thou,” and “Burn After Reading.”

In the Coen brothers’ work it doesn’t matter how rich or important or well educated you are — all it takes is a single word or gesture to betray the fact that we are all buffoons. If there is an odd humanism to the Coens’ mockery, it’s only because no one escapes it.

This is the prevailing spirit of the Coens’ latest movie, “Hail, Caesar!,” a tour through the absurdities of Hollywood in the early 1950s. But underneath its surface — and not that far underneath, since the movie is mostly surface — the Coens want to make a more serious argument as well: that silliness and superficiality is really the essence of all things, and maybe all that there is.

Eddie Mannix (Josh Brolin) is a “fixer” for Capitol Pictures, a job that seems to split the difference between producer and private detective. We first see him in a confessional, admitting to a priest that he’s been sneaking cigarettes. Apparently he goes to confession regularly; at the end of the movie we see him there again after a period of only 27 hours, which the priest tells him is “really too often.”

It’s not clear how Mannix’s Catholicism manifests itself outside of confession, but religion, or its simulacrum, is at the heart of the story. Capitol Pictures is in the middle of shooting “Hail, Caesar!: A Tale of the Christ,” a “Quo Vadis” or “Ben Hur”-esque historical epic about imperial Rome at the time of Jesus’ birth. The main character is a Roman soldier played by Baird Whitlock (George Clooney), a dimwitted but talented movie star who is drugged on-set and kidnapped from his trailer by a couple of shifty-eyed extras. Shortly afterwards Mannix receives a ransom note for $100,000 from a group purporting to represent “The Future.”

Mannix is worried about the kidnapping, but his attention is divided. Along with “Hail, Caesar!,” he’s got every other movie the studio is producing to deal with. We see him careen from set to set and crisis to crisis, solving problems and putting out fires while trying to maintain some semblance of married life, going to confession, and meeting with a headhunter from the aviation industry. It’s all very complicated, and might be a disaster in the hands of lesser screenwriters, but the Coens thrive on such chaos. And the frenetic plot structure allows them to include an enormous cast of characters who are played, almost without exception, by A-list celebrities.

There is Scarlett Johansson as DeeAnna Moran (based on the historical Esther Williams), a secretly pregnant blond bombshell with a tough Long Island accent and the starring role in an aqua musical. Alden Ehrenreich plays Hobie Doyle, a redneck heartthrob who gets lassoed into a domestic drama directed by Laurence Laurentz (emphasis first syllable, emphasis last syllable), who is played Ralph Fiennes. Tilda Swinton is a pair of ruthlessly competitive identical twin journalists who threaten to reveal a dark secret from Baird Whitlock’s past. And Channing Tatum is the tap-dancing star of a homoerotic musical about sailors on shore leave. Along the way we get small roles by big names such as Jonah Hill, Frances McDormand, Alex Karpovsky and Fred Melamed.

It’s a well-tuned piece of movie machinery, even if not all of the loose ends get tied up by the end — the Scarlett Johansson plot line goes nowhere, for example. But the question looms: Besides amusing lines and cheeky performances and a lot of reference to real Hollywood history, is there anything else at stake here?

The answer is no, not really. Most of the Coen Brothers’ movies exist on a continuum between tragedy and comedy, extreme pathos and utter farce. And “Hail, Caesar!” fits comfortably with their lighter pictures like “The Hudsucker Proxy” and “The Ladykillers” and “Intolerable Cruelty.” Yet the Coens’ best movies — or at least, the ones I like best — are those that exist in a nebulous middle state, where the chortle of cosmic laughter is indistinguishable from human suffering. “Hail, Caesar!” has a decent number of chortles, but they’re hardly cosmic.

This is in spite of — or at the expense of — serious subjects like religion, whose treatment by the Hollywood movie mill is a joke unto itself. In an early scene we see Mannix consulting with a panel of three Christian clergy and one rabbi, leading to an impromptu argument over the triune nature of divinity. When he asks for their thoughts on the film, the Orthodox priest (Aramazd Stepanian) calls it “fakey” because of an unrealistic chariot stunt, and the rabbi (Robert Picardo), after casting numerous aspersions on Christian theology, announces that he has “no opinion.”

Communism, that secular religion, also plays a central role, and is also the butt of jokes. When a Communist cell tries to indoctrinate Baird Whitlock, they find the job only too easy. Before long he’s reading issues of “Soviet Life” magazine and babbling about the time he was conned into shaving Danny Kaye’s back in Los Vegas and what a mistake that was because, after all, “who benefits?”

In a Hollywood tradition going back to Preston Sturges’s “Sullivan’s Travels” (to which the Coens paid homage in “O Brother Where Art Thou”), “Hail, Caesar!” doesn’t just make a mockery of weighty issues, but tries to show that frivolity is actually important. When a representative of Lockheed Corporation tries to recruit Mannix, his main argument is that movies are frivolous, whereas aviation is a serious business. But Mannix isn’t convinced. As he tells Whitlock, trying to disabuse him of certain Marxist notions, “the picture has worth and you have worth, so long as you serve the picture.” In the end, the narrator tells us hyperbolically, “the story of Eddie Mannix will never end, for his is a tale written in light everlasting.”

That’s a pretty big claim to make for a movie, whether it’s “Hail, Caesar!,” the Baird Whitlock-starring historical epic, or “Hail, Caesar!,” the George Clooney-starring Coen Brothers comedy. Both movies, to me, seem like a harmless good time, and not much more than that. But I guess that would be why they call it faith.

Ezra Glinter is the deputy culture editor of the Forward. Contact him at glinter@forward.com, or on Twitter @EzraG