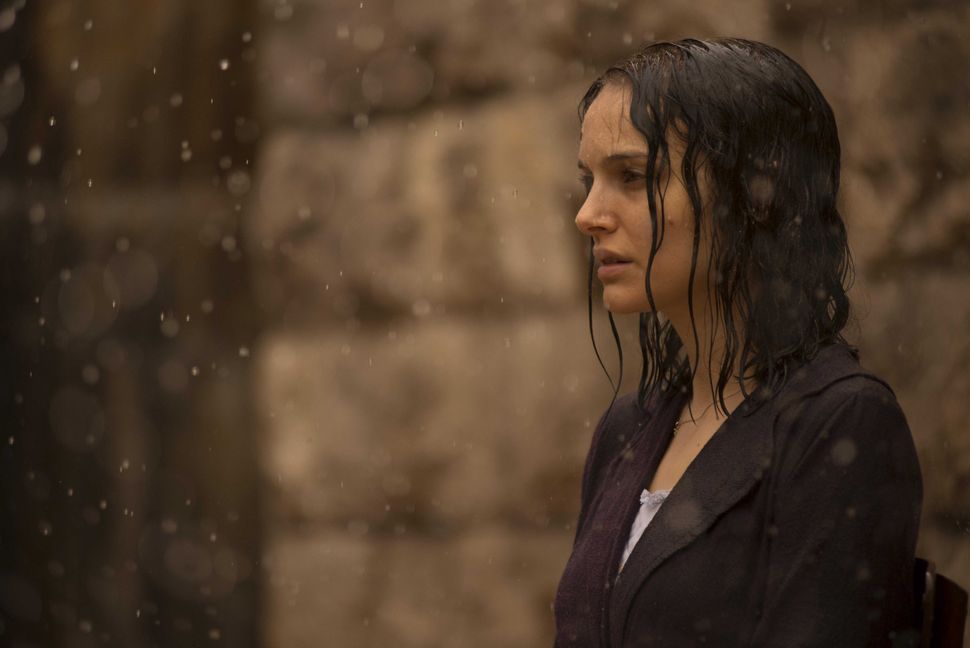 In his 2002 autobiographical novel, “A Tale of Love and Darkness,” the Israeli writer Amos Oz compares the process of remembering his childhood to the task of “trying to restore an ancient ruined building on the basis of seven or eight stones that are still left standing.”

More than that: In his attempt to describe his past, the then-63-year-old author relies on earlier moments of remembering, as if he is “trying to build something out of old stones that he is digging out of the ruins of something that was also, in its day, built out of stones from a ruin.”

In her cinematic adaptation of Oz’s book, which closes the Washington Jewish Film Festival on March 6, Natalie Portman incorporates this insight through the narration of an elderly Oz-like subject who reflects on his Jerusalem childhood. But the movie — which is Portman’s first as a screenwriter and director — is not just about the memories of one sensitive Jerusalem boy; it’s about a writer, and how the boy came to be one.

Portman’s film falls into a tradition of films like Giuseppe Tornatore’s “Cinema Paradiso” or Federico Fellini’s “8 ½,” in which an older artist reflects on his younger self. Only here, the protagonist isn’t an autobiographical version of the filmmaker, but an Oz-like writer, for whom autobiography means telling a story woven of other stories. And while these stories sometimes shape the younger character’s fate, at other times they are helpless to prevent it.

The movie opens with Amos (Amir Tessler), then around 8 years old, and his mother, Fania (Portman), telling each other fairy tales. It’s a game they play; each one takes their turn adding the next detail or plot twist, together building a shared fantasy.

If Amos and his mother choose to escape reality through stories, it’s because that reality is depressing and mean. Amos’s parents left Europe just in time to avoid the Nazi onslaught, but many of their friends and family weren’t so lucky. In his mother’s hometown of Rovno (now part of Ukraine), Nazis and their local collaborators murdered nearly the entire Jewish population in the course of a few days. As the narrator observes, it was “almost everyone my mother had ever known.”

Even if Amos’s parents were fortunate enough to escape the Holocaust, life in Palestine is still a struggle. Jerusalem of the 1940s is depicted as dirty, mud-splattered and medieval. In her youth, Fania dreamed of meeting a valiant pioneer who would be equal parts soldier, farmer and intellectual. But in her neighborhood of Kerem Avraham, she is surrounded by armchair strategists and small-time shopkeepers. Her husband, Arieh (Gilad Kahana), a librarian and failed academic, is a devoted father and husband, but also a bookish, pedantic and silly man — hardly the muscular pioneer of her dreams.

There are occasional happy moments. When Arieh publishes his first book — “The Novella in Hebrew Literature” — there’s a celebration at home, marred only by his mother’s derogatory comments about Fania’s borscht. When Fania gives her husband a kiss full on the lips to celebrate the publication, everyone in the room seems pleasantly flabbergasted.

The domestic setting of the film is the foreground of much larger events. Early in the movie, we see Amos accompany his parents’ friends to the house of a wealthy Arab family, where he flirts childishly with a girl his own age. But the possibility of such a friendship is soon cut short. Not long afterward, we witness the Jewish residents of Kerem Avraham gathered outside in the middle of the night, listening to a radio broadcast of the United Nations’ vote on the partition of Palestine. When the resolution passes, Amos’s father roars in exultation, and the entire street erupts in song and dance.

The political victory soon gives way to violence, as the surrounding Arab countries invade the nascent Jewish state. Amos contributes to the war effort by collecting empty bottles for Molotov cocktails, and edible plants to relieve the hunger of starving Jerusalem residents. His parents’ basement apartment becomes a makeshift bomb shelter for family and friends, who camp out on mattresses in the kitchen and hallways. When a sniper shoots one of his mother’s friends while the friend is hanging laundry, Fania sobs through the night. In contrast to her girlish dreams, the narrator notes, this suffering “wasn’t romantic at all.”

Today Oz is a prominent member of the Israeli left, and a proponent of the two-state solution. And the movie incorporates his observation from the book that the Arab-Israeli conflict is like a fight between the two children of an abusive father, who turn on each other rather than against their common oppressor. But “A Tale of Love and Darkness” is primarily the story of a small boy and his parents, and especially of his mother, who, as the film progresses, sinks deeper and deeper into a crippling depression.

Here, Portman comes into her own as an actor; as in her starring role in Darren Aronofsky’s “Black Swan,” she shows a great talent for depicting the ravages of mental illness. As a screenwriter and director, however, Portman falls short of the mark. Whereas reading Oz is like going on a languorous journey through the stations of his remarkable life, watching Portman’s movie is more like a rushed tour from stop to stop, with a visitor’s guide in hand.

Yet in her first effort as writer and director she didn’t pick easy material to work with, nor is it the most commercially attractive. Despite her cachet in the American film industry, Portman decided to make a movie in Israel and in Hebrew, including her own impeccably delivered lines. Clearly this was not just a tale, but also a labor of love. Reading Amos Oz, it’s not hard to understand why.