‘Wedding Doll’ Is Israeli Romance With No Hollywood Ending In Sight 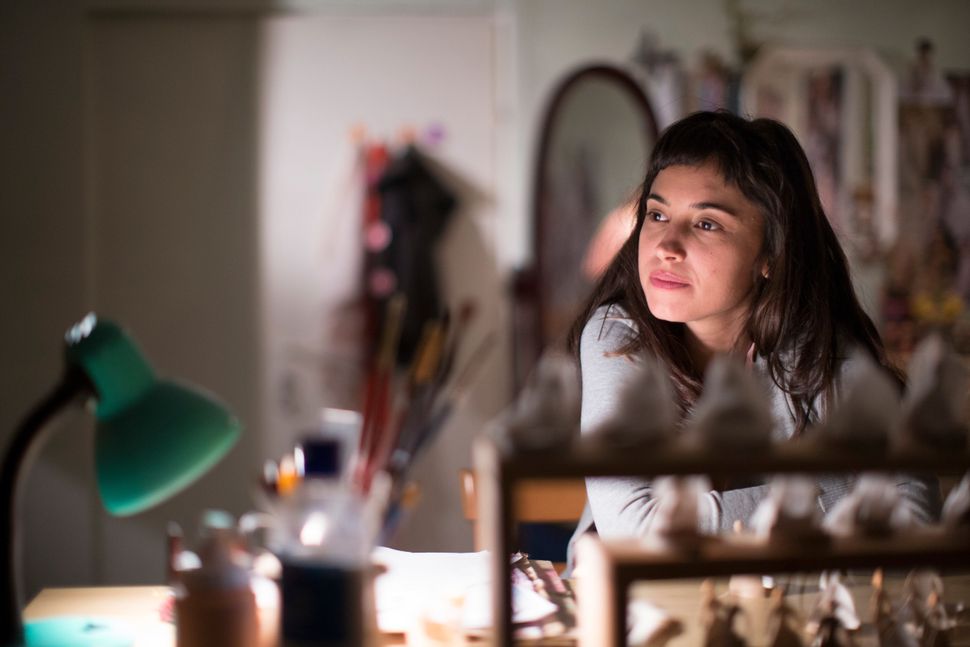 **Trouble in the Negev: **Moran Rosenblatt won an Ophir award for her portrayal of a woman with a mild mental disability. Image by Outsider Films

In the 1993 movie “Benny and Joon,” Sam (Johnny Depp), a strange and illiterate young man, falls in love with Joon (Mary Stuart Masterson), an artistic young woman who suffers from occasional psychotic episodes. Aside from the odd breakdown, though, you wouldn’t know there was anything wrong with her. As Sam says to Joon’s brother Benny (Aidan Quinn), “You know, it seems to me that, I mean, except for being a little mentally ill, she’s pretty normal.”

That observation also describes Hagit, the main character in “Wedding Doll,” the morally complex debut feature from Israeli director Nitzan Giladi. Like “Benny and Joon,” “Wedding Doll” is about a troublesome romance between a woman with a mild mental disability and a more-or-less normal young man. So too, it’s about the efforts of the woman’s family to protect her from others and, more problematically, from herself.

Unlike its American predecessor, which was set in an idyllic American small town, “Wedding Doll” takes place in a remote area of Israel’s Negev desert. Although the rugged landscape is beautiful, it is also filled with desperation and menace, an effect reflected in the movie’s ominous sound design and score.

But the isolated setting and hushed atmosphere highlight the interior lives of the characters, and give the actors an opportunity to shine. Hagit, played with perfect sympathy by Moran Rosenblatt (whose performance won her an Ophir award for best actress), is only slightly disabled. She has a mild speech impediment, which is apparent even if you don’t understand the Hebrew dialogue, and a childlike sense of innocence belying her 24 years.

She also still lives with her mother, Sarah (played by Asi Levi, who won a best actress award at the Jerusalem Film Festival), a divorcee who worries about her ability to take care of her daughter as they both age, and who agonizes over the possibility of putting Hagit in a group home.

Despite being high-functioning, Hagit is a little bit “touched,” as people once said, and is still bullied by local kids. In one of the movie’s most disturbing scenes, she is sexually menaced by a couple of young men, highlighting her vulnerability. And Sarah, despite her devotion to her daughter, has her own life to lead and her own romantic interests to pursue.

Yet Hagit can also take care of herself. She holds down a job at a local toilet paper factory, and spends her days filling plastic packages with the rolls that it produces. In her spare time she pursues a singular obsession, which provides the title of the movie: Like many young girls she dreams of being a bride, and she uses leftover toilet paper rolls to create little bride-like dolls. She even dresses them in toilet-paper dresses, and carries them with her everywhere, like ghostly good luck charms.

However improbable it may be, Hagit’s wishes seem to be coming true. She and her boss’s son, Omri (Roy Assaf), have struck up a secret workplace dalliance, sneaking behind the stacks of toilet paper to make out. Such a relationship could easily be creepy and exploitative. She’s an attractive but mentally delayed woman, and he’s a fully functioning adult man. Yet there seems to be no ill intent here, just a sweet romance between two innocent people.

But the good times never last. The toilet paper factory is going bankrupt, and despite Omri’s efforts to borrow money for a vital new machine, his father decides to close the business. It would be better, he says, for Omri to go to university in Canada — partly because there isn’t a future for him at a toilet paper factory in the Negev, and partly because he suspects that something is going on between his son and Hagit.

Do Omri and Hagit wind up together anyway? Does true love conquer all? Whatever the resolution is here, the most interesting question posed by “Wedding Doll” isn’t whether or not there’s a happy ending — it’s what a happy ending even means. Despite their good intentions, can Hagit’s relationship with Omri succeed? Is she not just being set up for disappointment and heartbreak? Then again, aren’t we all?

This is a dilemma that confronts the filmmaker, the audience, and the characters themselves. Does Hagit need to be shielded from harm, or does she have the right to make her own mistakes? Although her family and friends mean well, their attentions can easily become oppressive. This is particularly true of Hagit’s mother, who finds herself caught between protecting her daughter, and preventing her from realizing her potential.

In keeping with its difficult subject, “Wedding Doll” offers us no Hollywood endings — just difficult choices and their consequences.

‘Wedding Doll’ Is Israeli Romance With No Hollywood Ending In Sight