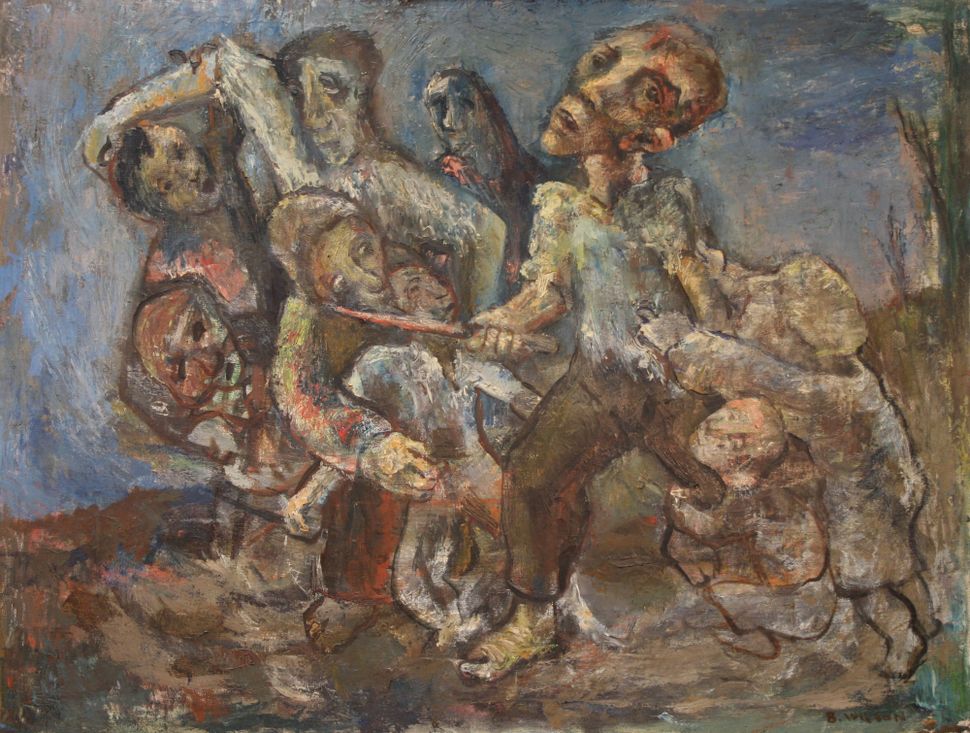 When a group of young Jewish men and women stockpiled arms and rose up against their Nazi oppressors in the Warsaw Ghetto, 73 years ago today, they surely weren’t motivated by the idea that what they were doing would make for good TV. But in the decades since that Passover eve, countless novels, plays, poems, comic books, radio dramas, and television shows have retold the event, presenting it as the paradigmatic act of rebellion and heroism during the Holocaust. Even Rod Serling, of “Twilight Zone” fame, saw the appeal — but when the six-time Emmy winner adapted the story for television, the medium of which he was a master, things did not work out as he planned.

On April 19, 1943, Jews in the Warsaw Ghetto mounted the now legendary revolt. Modest numbers and meager weapons notwithstanding, against all odds a small group of Jewish militants held off 2,000 well-armed SS men for 42 days though the entire Polish Army had fallen to the Nazis in a mere 27 days a few years earlier. No wonder the Warsaw Ghetto partisans have captured the American imagination.

Aired in May 1960, Serling’s teleplay about the Warsaw Ghetto, “In the Presence of Mine Enemies,” was the last episode ever to air of “Playhouse 90,” one of the most celebrated of early American television shows. The major themes of “In the Presence of Mine Enemies” run through some of Serling’s earlier teleplays. Interested in complicated issues that plague humanity, including prejudice in its many forms, Serling wrote a number of dramas that probe the human psychology of discrimination, and the related issue of the struggle between good and evil.

Premiering seven months before “In the Presence of Mine Enemies,” “The Twilight Zone” was, in part, created to explore modern-day social issues, albeit through unorthodox stories, a ploy triggered by Serling’s frustration at sponsor intrusions. While Serling is famous for the aliens and other supernatural elements in the “The Twilight Zone,” which allowed him to treat social problems obliquely, “In The Presence of Mine Enemies” confronts the Holocaust without a mask.

“In the Presence of Mine Enemies” tells a story about the Heller family’s experience and eventual fate in the sealed Warsaw Ghetto, beginning a week before the uprising, after the action that transported 350,000 inhabitants from the ghetto to the death camps. With tensions increasing, Rabbi Adam Heller (Charles Laughton) and his son Paul (Arthur Kennedy) — who has escaped from a prison camp — are at odds. The rabbi believes that faith will see the Jews through the war, but the embittered Paul, whose face has been scarred in the camp and who has seen first-hand the evil of which Nazis are capable, is primed for resistance. It’s a familiar trope: the freedom fighter vs. the man of the book.

Meanwhile, Rabbi Heller’s daughter, Rachel (Susan Kohner), dedicated to her father, is raped by a middle-aged Nazi officer. A younger Nazi, Sergeant Lott, played by “newcomer” Robert Redford in his first major role, experiences a crisis of conscience: he’s a man torn between what he knows is right and the orders of his commanding officer. A Polish, Christian peddler named Josef Chinik (Oskar Homolka) helps the Heller family by bringing them food, books and wine whenever possible.

Videoed on a stage in a CBS studio, most of the action takes place within, and up and down, the mazelike, stifling confines of the stairwell leading up to the Heller’s tiny apartment. At the onset, the rabbi’s son Paul is missing, but fifteen minutes into the telecast he comes home, hostile and worse for the wear after escaping from a prison camp. They begin arguing almost immediately and continue. Rabbi Heller advocates belief in God. Paul cynically replies: “God can’t hear you papa. God has left the premises. He has new friends now. So Papa, I’d hold up any further prayer till I found a replacement. A God a little more righteous than the one who has moved over to the Germans.”

In stark contrast, Sergeant Lott offers a study in compassion. When commanded to hit Rabbi Heller, Lott superficially slaps him, much to his superior’s dismay, who then punches the rabbi. At Nazi headquarters Richter questions Lott’s loyalties. In an especially disturbing conversation, Richter matter-of-factly explains to an uncertain, wide-eyed Lott that if Germans hate Jews then they are unified. He further reasons that Jews need to be tortured and made to feel pain so they continue to fear their oppressors and remain victims rather than opponents. Lott questions, “How do I reconcile hitting old men and hating starving children with any kind of logic?”

Richter asks Lott to fetch Rachel for him, and hesitatingly, he does. To no avail, Lott tries to console Rachel during the car ride to Nazi headquarters. The captain rapes her.

Conditions in the ghetto worsen: water freezes in the taps, food becomes scarce, Jews die in large numbers. Lott, distraught because he is complicit in Rachel’s rape, returns to the Heller’s apartment. Knowing that a revolt looms and the ghetto’s Jews will perish, Lott, in part to amend for his sins, wants to help Rachel escape through the sewers. He professes his love for her and describes his all-consuming guilt. In a stirring scene, a vulnerable Lott bows at Heller’s feet asking his forgiveness: “We are not all beasts. We are not all animals. As God is my witness, rabbi. Some of us have not forgotten how to love. Oh God, Rabbi, forgive us. Please forgive us.” Watching Lott submissively kneel before the rabbi, the audience is reminded of Paul’s disrespect for his father, and dismissal of his faith.

Crucially, “In the Presence of Mine Enemies” ends in fairy-tale fashion: The young, attractive German and Jew come together and ostensibly make it to safety, and the once-bickering father and son set out together to die honorably, each in their own way.

That ending was not what Serling had in mind at all. In a version of the script censored by the network, Paul enters the apartment to find Rachel packing to leave with Lott. His anger is fierce as are his objections to the escape of his sister and her German paramour. Heller prevails upon Paul to calm down, reasoning that at the very least two young people must live.

The scene cuts to a sewer, where Rachel and Heller meet up with Lott. Paul has followed them, ready to thwart his sister’s escape with a man he perceives as the enemy. He raises a gun he has procured for the mounting uprising. Unable to stop Paul verbally, the rabbi shoots his son with a gun he was given by a rebel. Paul’s last words are ones of relief that the revolt has begun and that his coreligionists will finally fight. The distraught rabbi looks at his now dead son in a subterranean grave and supplicates. Lott and Rachael are gone, the rabbi has no children left, and he most certainly will die. This horrific twist, a sensational gambit typical of Serling’s work on “The Twilight Zone,” predated “Sophie’s Choice” by almost two decades. No longer do Heller and Paul “heroically” run off into gunfire, an unsatisfying anti-climax. Instead, the story ends with a chilling and bleak moral dilemma, an honest and effective example of Serling’s work. Perhaps, if filmed, that ending might have garnered more positive reviews.

A remake that premiered on Showtime on April 20, 1997, the day after the 54th anniversary of the battle, adopts the intended ending. Critics praised the show for the “principles taught by the surprise ending [which] are worth thinking about,” although one reviewer felt that the denouement in the sewer was “wisely discarded” by Serling in 1960. Critics cited the original teleplay as failing for its overly talky nature, but that was in part because of the limitations of filming in a studio, hence action and atmosphere could not easily be communicated, and also because Serling ended the program with a conciliatory conversation rather than the Greek tragedy planned. Daily Variety Review described the show as a “cerebral recollection of one of history’s most inhuman chapters.”

Leon Uris, the celebrated author of “Exodus,” took the episode more personally, as did many other viewers. He voiced his antipathy in a blistering, open letter to CBS, calling it “the most disgusting presentation in the history of American TV. I cannot conceive how you would permit such an insult and defamation of the Jewish people by public mud-slinging on the graves of half a million Jews who were killed in the Warsaw Ghetto… Joseph Goebbels himself could not have produced such a piece of Nazi apologetics. I demand that CBS burn the negative of the film and publicly apologize for the scandal.”

Rejoinders to Uris were equally impassioned. Charles Beaumont, who wrote for “The Twilight Zone,” regarded Uris’s impeachment as “hysterical, vicious, and wholly irresponsible. As for his demand that CBS burn the film, the author of Exodus would do well to remember that that sort of thing was one of Herr Goebbels’ specialties.” A personal letter from Ann Landers (signed with her birth name Eppie) to Serling weighed in, “We thought ‘In the Presence of Mine Enemies’ was one of the best things on television in recent years. This bird Uris must be out of his Jewish mind!”

Like Landers, some viewers enjoyed the show. Serling received letters along with Western Union telegrams praising the production. But Serling himself realized that the teleplay did not quite come off as planned. Responding to a letter from a rabbi who was distressed by the production, Serling dubbed the drama “a source of humiliation for a number of years to come.”

It was not ghetto heroism, as much as the people, flaws and all, who figured into Serling’s conception of what had happened in Warsaw. But in 1960, the Holocaust was not as readily a part of Americans’ collective memory as it would soon become. The Eichmann Trial had yet to polarize the American public and survivors had still not told their stories en masse. The “Holocaust” was somewhat of a generalized concept, with few gradations, for the most ignominious moment in modern history and one that the average American wanted to keep in gauzy memory.

If an episode from the Holocaust was going to be told then the Jews should not be morally equivocal, complicit, or anything but righteous. If an episode from the Warsaw Ghetto was going to be told then it should be an account of the uprising, for in that there was at least purpose and a small “miracle” amid an ocean of despair. The uprising provided a story that could make a gentile’s heart swell with emotion and respect, and a Jew’s with hope and pride. For that sort of ghetto redemption narrative, Americans had to wait for the chastising Leon Uris, whose bestselling, widely praised novel about the heroic battle in the Warsaw Ghetto, “Mila 18,” came out the following year.

“Playhouse 90” episodes were filmed in black and white, but Serling’s original script was anything but black and white. It took many more years until Americans would be ready for the kind of searching, complex take on the Warsaw Ghetto that Serling offered; by some accounts, we’re still not quite ready yet.