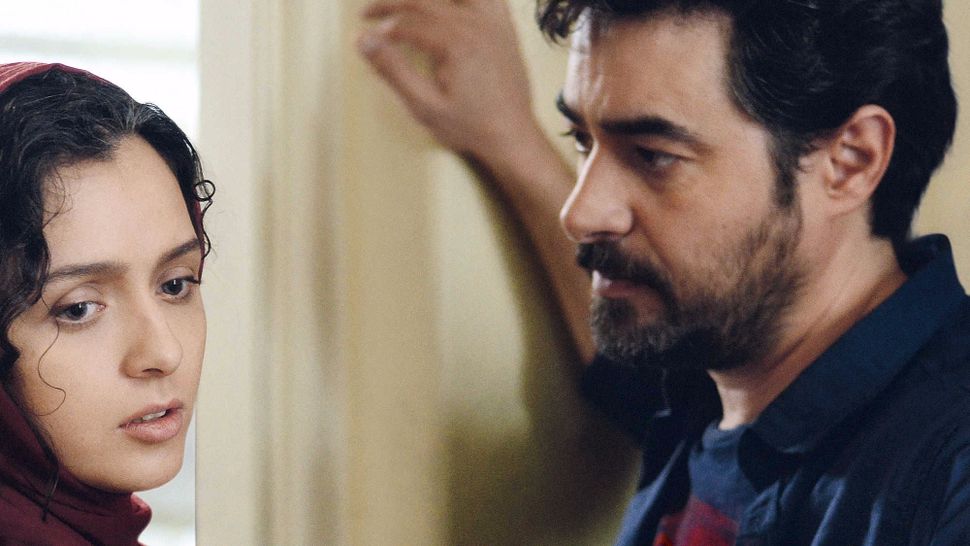 Midway through Asghar Farhadi’s “The Salesman,” Emad, the actor and schoolteacher who serves as the Oscar-nominated film’s protagonist, seizes one of his student’s phones, hoping to delete photos the student has taken of him sleeping. He castigates the boy for the risqué images he finds, telling him his father needs to look at them. A classmate reveals that the boy’s father is dead; a muscle tenses in the student’s jaw, and his heart clearly, again, breaks.

“The Salesman,” which situates itself in dialogue with Arthur Miller’s “Death Of A Salesman” — over the course of the film, Emad and his wife, Rana, star in a production of the play — is built on such gestures, choices made with a theatrical pretense that leads to consequences of unexpected violence. Characters express misplaced humor or anger, and throw entire relationships into jeopardy; one actress replaces another in the play, and the whole performance falls apart; after Rana is assaulted in the apartment she shares with Emad, she tells her husband the first thing her attacker did was stroke her hair, an almost gentle gesture — albeit an astonishingly invasive and creepy one — that profoundly alters all three characters’ lives.

Most significantly, at the film’s climax — spoiler alert — Emad slaps the man who assaulted Rana. The gesture seems to shock them both; the man staggers back against the doorway, and Emad’s gaze adopts a cast of resentful confusion.

As the man leaves the apartment in which their encounter takes place, he falters and then collapses. Does he do so because of the slap, or because of the simultaneously accusatory and unexpectedly compassionate presence of Rana, who has begged Emad to treat the man with tolerance? Does his heart give out, for the second time in the film, because of the stairs? Or is the event karmic payback for his crime against Rana?

Those in the audience will never know, just as they will never know whether the man lives or dies. The question of the slap is what remains: Did Emad, lashing out in what he must have presumed to be a nonfatal manner, kill a man?

These gestures gone awry emphasize the danger of making life theatrical, already highlighted by the difference between Emad and Rana’s domestic interactions and the ones they have onstage. They also, in an unwelcome twist of fate, inform the political frenzy over President Trump’s executive order on immigration and refugees, in which “The Salesman” has recently taken a small but meaningful role.

Farhadi, who is Iranian, had intended to attend the Oscars, where “The Salesman” is nominated for best foreign picture. That changed on January 27, when Trump signed an executive order prohibiting entry to the United States for citizens of seven Muslim-majority countries, including Iran, for 90 days. (The order also prohibited the entry for any refugees for 120 days, and for Syrian citizens indefinitely.)

Farhadi responded by issuing a statement announcing he would no longer attend the ceremony, as the circumstances of him doing so would be “accompanied by ifs and buts, which are in no way acceptable to me even if exceptions were to be made for my trip.” His plight, and his emphatic response to it, drew unexpected attention to his film.

That film refracts that spotlight in unexpectedly political ways.

What are Trump’s executive orders, the signings of which are often accompanied by great fanfare — hoards of applauding white men, Trump proudly presenting the orders for the camera’s approval — if not theatrical events?

What is the choice of the seven countries involved in the order, citizens of whom have executed no fatal attacks on U.S. soil since 9/11, aside from an arbitrary gesturing of power?

It is easy to enter an open apartment and stroke an unsuspecting woman’s hair; it is similarly easy to pick a set of foreign countries, conveniently avoiding those where you hold business interests, and call them the enemy — especially if you’re not fully reading the orders you sign.

Trump’s order is only the most recent extreme reached by years of escalating Islamophobia in the United States, and it’s no accident that Farhadi created a film, at this historical moment, that engages with this particular staple of American culture.

Miller was, after all, a master excavator of the subtle relationship between theatrical gesture and fatal consequence: The prosecutorial menace of his “The Crucible,” for instance, is engendered almost entirely by the disjointed flailings of a set of teenage girls. He famously wrote that play as a revocation of the self-satisfied instinct of Americans, predominantly white ones, to imagine their society as blissfully liberated from the risk of guidance by prejudice. By exposing the ideological rot behind the morally fervent front of the Salem witch trials, Miller gave the play’s first audiences a forceful hint: Their own America, host of Joseph McCarthy’s crusade as head of the House Un-American Activities Committee, differed from the America of the Salem travesty only in its trappings.

“Death of a Salesman” is not “The Crucible,” but it’s a similarly disorienting immersion into the mind of a person who, when making decisions with consequences that feel cosmic, experiences a perversion of perspective. The play’s protagonist, Willy Loman, becomes so obsessed with an idea of what his family ought to be that he loses any ability to understand, let alone appreciate, what it actually is. Facing a crossroads in his life, he fixates on a single destructive route forward, in part because the alternate paths that flit across his consciousness radically destabilize his understanding of the context of his life.

In “The Salesman,” Emad does the same, at immense cost to his wife. Rana, powerfully played by Taraneh Alidoosti, exists on the periphery of her husband’s response to her attack. She begs him to focus on caring for her; he becomes preoccupied with vengeance, and lets his care falter. At last, when she asks Emad not to tell her attacker’s family what he did to her, Emad capitulates. Still, we’re given to understand, it’s too little, too late.

Look, the film begs, at how people with power, even minor forms of it, tend to further hurt the wounded in the singular quest to right a perceived moral wrong. Look at what the performance of that quest can do. And look at how inevitably, it seems, the action that strikes the powerful as easiest is the action that’s most destructive. Emad is inclined to pursue what he considers justice for his wife. Not once in the film, until its climax, does he seriously question that inclination.

In refusing to participate in the Oscars, even if given the opportunity to enter the country, Farhadi has rejected the idea of facilitating the Trump administration’s efforts to make its order palatable, and rejected the idea of putting personal fulfillment over the communal good.

From Farhadi’s film and from his person, then, take an important lesson: The gestures we make matter, from a single slap to the shuttering of a country to those most in need.