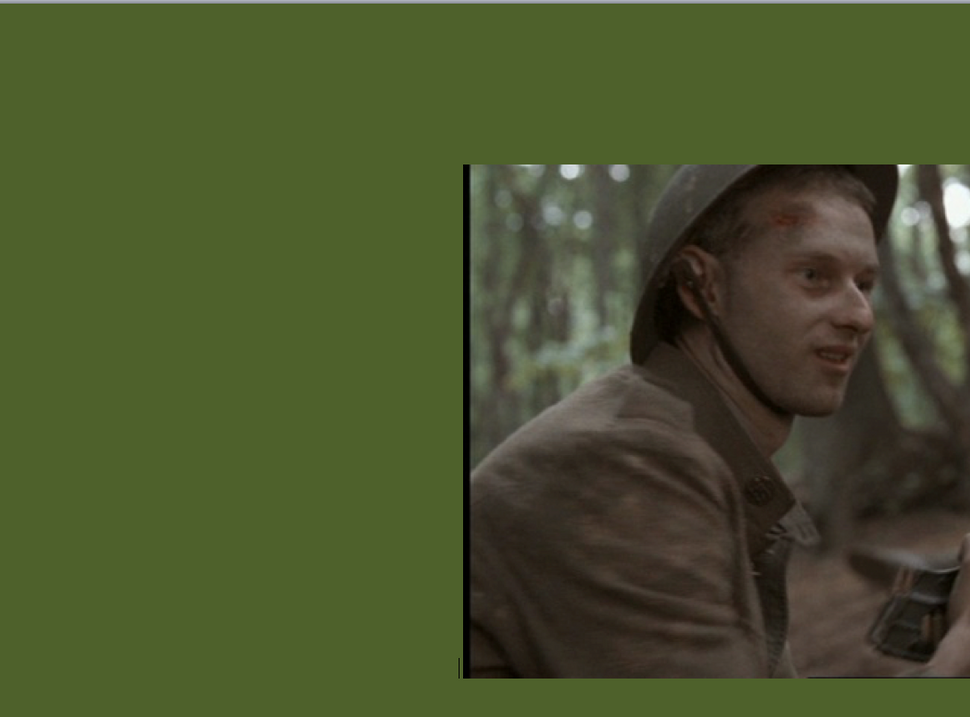 Arthur Kremer as Abraham Krotoshinsky in the 2001 movie “The Lost Battalion.” Image by http://www.imfdb.org/

(JTA) — In celebration of its 2017 centennial, JTA is highlighting stories from its archive.

(JTA) — Things weren’t looking good for the more than 500 Allied soldiers trapped by German forces in France’s Argonne Forest in November 1918. Not only were they under fire from the Germans, they also were being bombarded with shells from Americans who were unaware of their entrapment.

Food, water and ammunition were running low. The soldiers — dubbed the Lost Battalion — sent out messengers to make contact with the rest of the American forces, but none managed to bypass or survive the German line of fire.

That is until one Jewish soldier stepped forward. In honor of Memorial Day this Monday, we are retelling the story of that soldier, Abraham Krotoshinsky, with the help of the JTA archive and other historical materials.

“Our situation appeared and was desperate and hopeless,” recalled Krotoshinsky, a member of the 77th Division of New York’s 308th Infantry who volunteered to try to sneak past the Germans.

Here is Krotoshinsky’s account of the mission, published in the book “The Jew in the American World“:

Again a request was made for volunteers. I stepped forward. Another soldier with whom they sent me out was forced to return soon after. I continued alone. I started out at daybreak, but it did not take me long to be aware that I was a target for the Germans. I ran across an open space, down a valley and up a valley into some bushes. I remember crawling, lying under bushes, digging myself into holes. Somehow or other — I don’t know how to this day — I found myself at nightfall in German trenches. I saw several of them smoking cigarettes. I knew that if they knew of my visit the greetings they would have extended to me would not be any too friendly. I hid under some bushes, lying prone and acting dead. A German who, judging from the pressure, never knew anything about a reducing diet, stepped on one of my fingers, but I kept myself from making any outcry. Later I crawled into another deserted German trench. You can imagine the thrill I got when I heard good English words spoken. No music ever sounded better.

From there, Krotoshinsky relayed the situation to the American soldiers, who then stopped firing at his battalion and sent a relief squad with medical supplies and food.

Thanks to his bravery, 194 members of the original battalion were able to leave the Argonne Forest unharmed. The rest were killed, wounded or captured by the Germans.

Krotoshinsky was presented with the Distinguished Service Cross, the second highest U.S. military honor, by Gen. John J. “Black Jack” Pershing, who led American forces on the Western front in World War I.

Despite his gallantry, the Jewish soldier remained humble about his role in saving the Lost Battalion.

“What I did, it seems to me, was nothing heroic, nothing deserving of all this fuss, and a stunt which I carried out because I wanted to, and had the next one been as lucky as I, he too would have been able to do it,” he said.

Krotoshinsky was born in 1892 in Plotsk, which was then under Russian control but is now in Poland. After immigrating to New York in 1917, he found work as a barber before being called for Army service.

“America, my adopted land, was always more precious to me than the land of my birth, in which I considered myself an alien and an outsider,” he wrote, citing anti-Semitism in Russia.

After the fighting he returned to New York, where he was celebrated as a war hero and became a naturalized U.S. citizen, according to the book “Good Americans: Italian and Jewish Immigrants During the First World War.”

With the help of the Jewish department store magnate Nathan Straus, he later followed his Zionist dreams and moved to Palestine, where he lived on a farm, married and had two children. Financial difficulties forced him to move back to the United States, where the war hero also struggled to make a living.

Things took a turn for the brighter, however, when a Harlem lawmaker, Rep. Fiorello LaGuardia, read about Krotoshinsky’s plight in a newspaper. In 1927, JTA reported that the future New York City mayor was so moved by the war hero’s situation that he lobbied for President Calvin Coolidge to issue an executive order so that Krotoshinsky could work as a postal clerk without having to go through the usual required examination.

“The salary was not announced, but it is understood that it will furnish a livelihood to the veteran and his family,” according to JTA.

Coolidge issued the order and Krotoshinsky stayed in the job until his death in 1953 at the age of 60.