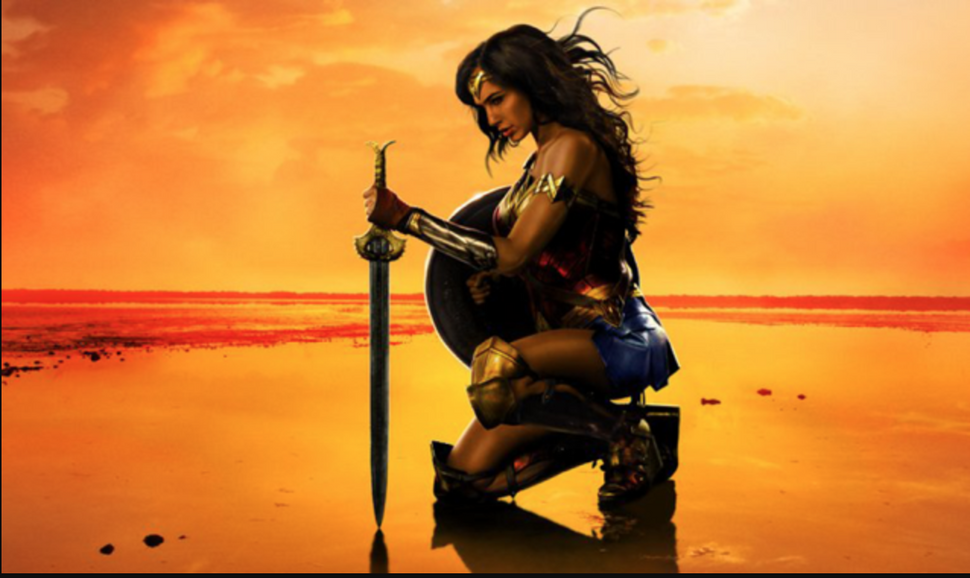 “Wonder Woman” is the biggest hit of the year, the savior of Warner Brothers and the greatest boon to the chattering classes since Trump’s election. Only four days into its release, it’s brought in 200 million dollars and almost as many reaction pieces. Is it too feminist? Is it not feminist enough? Gal Gadot is white, did her casting prove that the movie is itself an expression of white Zionist supremacy? Wait, she’s Israeli, and she’s got dark hair and eyes, so maybe she IS a woman of color?

And is Gal Gadot Israel’s awesomest export since halvah? Or should we boycott the movie because she served in the IDF and went full Likkud in a 2014 Facebook post? And speaking of Gadot, is it possible for men to write about her physical beauty without sounding creepy and awful? (Yes. No. No. Hell no. No again. No, but if Gadot’s “Wonder Woman” had landed in present-day Gaza and not latter day Europe, she would have been in the streets knocking out IDF soldiers with their own tanks before you could finish reading this sentence. And finally, yes, unless you’re David Edelstein, in which case, dude, that rebuttal isn’t helping.)

Fortunately for us, three of the main artists in question — director Patty Jenkins, screenwriter Allan Heinberg, and, sure, Gal Gadot, who really kills it here — are interested in other questions, and as with all great imaginative storytelling, those questions begin with “What if?”

What if there was a little girl who was brilliant and brave and spirited, who lived on a beautiful hidden island, safely protected from all the violence in the world? What if her mother was the wise ruler who governed the kingdom, and her aunt the fierce warrior chief who protected it? And what if they both, with varying degrees of familial concern, eventually agreed to give her her heart’s desire: The chance to become a fierce warrior herself?

What if, since no one else on the island seemed to have children or regret not having them, it never occurred to her to tie her self-worth to her ability or willingness to reproduce?

What if no one told her to associate sex with guilt or fear?

These questions are implicit in the world-building on Diana’s home island of Themyscira, not because they are ever stated explicitly, but because oh my god, none of these things ever happen, which means she lives in a world that is magical and fantastical indeed: A world no girl of genius or passion or ambition has ever encountered, at least not since the real Amazons rode the planet. And they probably were not nearly as excellent as Diana’s people.

That’s the thought experiment introduced in Act 1 and explored, with more curiosity than dogma, in Acts 2 and 3.

You all know the score: Diana saves Steve Trevor from drowning and discovers that out there in the world of man, the War to End All Wars has been raging for years. The deaths and horrors of WWI clearly must mark the return of the Greek war god Ares, and so Diana sets out to save mankind, assuming with all the naiveté of one who has never actually encountered Mankind, that it’s that other guy’s fault, not ours, that we are so generally awful.

First stop is London, which Diana immediately and appropriately pronounces “hideous.” It’s not only polluted, impoverished, and violent, it’s also a world in which women cannot vote, let alone govern, and walking down the street unaccompanied is a potentially fatal excursion. Diana cannot move left or right without being harassed, — as she will discover when she offers her help with a critical diary translation — ignored. Diana has discovered the swamp, and since she wasn’t raised there it has no power over her. Her chief concern is that all these men, even the ones she likes, just keep getting in the way of her plan to save us all.

Diana has all the powers and strength she needs, but she’s not Wonder Woman yet. She believes that all she needs to end the war is to find Ares and kill him so he can stop corrupting the hearts of men, who would be good and kind without his influence. It’s the most human thing about her, this fantasy that evil can be contained within one person, one deity, or one side of a battle line — and she can’t become Wonder Woman until she learns the truth about humans, which is that we basically suck, and she needs to find it in herself to love us anyway.

The knowledge comes, but at a price. And that price is of course Steve Trevor (Chris Pine, at a career best). Trevor is a morally unimpeachable, delightfully quippy and all around perfect Dude Who Makes The Hero a Better Woman. He has a spy mission too — something about notebooks and explosives and gas — but his real mission is to give Diana a taste of love. The former is fun but almost incidental, and Diana jumps into bed with Steve with no angst or guilt (In one of the movie’s most sweetly radical bits, she calmly informs an embarrassed Steve that reading materials on the island included a 12 volume treatise on reproduction and “the pleasures of the flesh.” This somehow did not prevent a Slate writer from suggesting that Diana’s cloistered life on the island should cause us to doubt her capacity for consent).

Trevor tells Diana, and then proves to her, that while mankind doesn’t deserve saving, real love is never about what people deserve.

This beat is followed by a requisite goofy battle sequence, but the film’s most moving final confrontation is actually not between Diana and Ares, who does finally reveal himself, but rather between Diana and Dr. Maru – the movie’s least developed but most interesting villain. Dr. Maru is a ruthless German chemist whose face is half covered by a mask, and twisted into a pained grimace (Elena Ayala, the Spanish actress who plays her, is in real life a dark-eyed beauty who not coincidentally looks quite a bit like Gadot herself). We only get one real chance to hear her speak, and that is when it seems at first that she is falling for an enemy spy’s attempt to charm her for information (it’s one of many nuanced beats that demonstrate why this film is miles ahead of the other superhero blockbusters).

Maru tests her poisons on helpless prisoners, and while she seems cruel enough, her heart doesn’t much seem to be in the torture and maim part of the job. Maru is trying to invent a deadly gas that will give Germany the advantage it needs to avoid surrender, and even there she seems motivated less by patriotism or even Evil than by a compulsive need to please her boss, the noisier but less compelling General Erich Ludendorff (Danny Huston, who doesn’t have much to work with here.)

Like Diana, Maru was born beautiful and brilliant, but somewhere along the way her spirt and face were disfigured. We first see the human scars behind the monster mask at the same time as Diana — it’s one of those perfect visual metaphors that critics call “cliché” and comic books lovers call “comic book.” Maru had no mother-king, no aunt-warrior, and no protection against the constant bombardment of soul-crushing messages and that constitute growing up amongst mankind. Maru is a twisted, mangled genius, and Diana won’t really become Wonder Woman until she looks Maru in the eye and sees her too as worthy of mercy.

It’s been nearly 100 years since Diana’s first war, the one that was supposed to end them all. And in the sequels she will rejoin our heroes in the present, a time in which mankind has verged on a course that will end us all. And collectively, we are still raising our children in ways that will likely yield thousands of Dr. Maru’s and no Diana Prince. Which is too bad because yes, we need superheroes. But even more, we need to hope that those superheroes love us enough to give us what we need, rather than what we deserve.