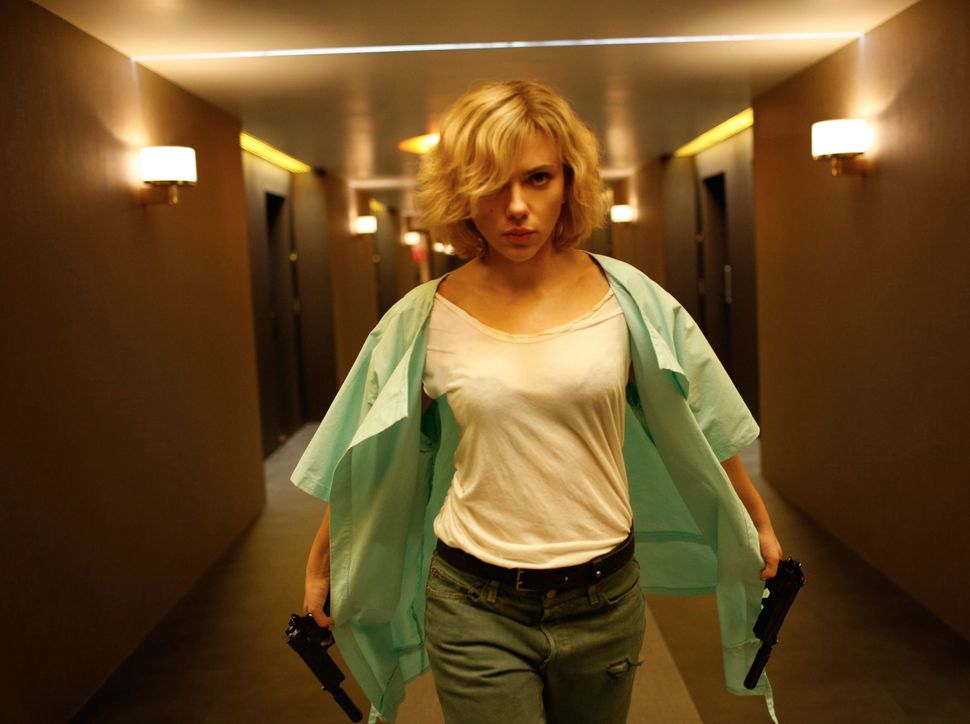 Nobody is saying that “Rough Night” is a great film, but what charm it has comes from Scarlett Johansson playing against type. Johansson’s roles tend to cast her as the perfect woman — her last appearance earlier this year as an icy superhuman cyborg in “Ghost in the Shell” was typical.

In “Rough Night,” she still looks the part of onscreen goddess, but the script calls for her to slum it up. She’s the ideal white girl, fallen from grace. The thing about Johansson, though, is that she’s not exactly the ideal white girl. Johansson’s mother is Jewish. And as in “Rough Night,” many of her roles, if you look closely, play with the idea that Johansson is both the white American ideal and a step outside it. She’s a paragon who acknowledges in one way or another that as a paragon she’s constructed — built up, artificial. As such, her body of work can be seen as grappling with the successes and failures of Jewish assimilation.

The fact that Johansson has become the Hollywood ideal is a tribute to how invisible Jewishness is, and to how thoroughly seen Jewish people in America are not as Jews, but simply as white people. Yet her roles as aliens, robots and outsiders suggest that whiteness remains uncomfortable. a seamless carapace pulled just slightly too tight. Johansson’s status as white ideal is established early in her breakout role as cynical teen Rebecca in “Ghost World.” Rebecca is much more conventionally attractive than her best friend, Enid, played by Jewish actor Thora Birch. The film goes out of its way to comment on the fact that boys like Rebecca better. 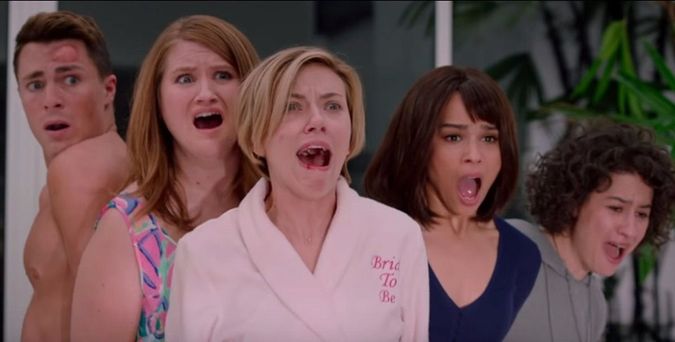 It also goes out of its way to link Enid’s weirdness and frumpiness to her Jewishness. One of Enid’s friends is an asshole racist; he greets the girls by sneering, “Enid and Rebecca, the little Jewish girl and her Aryan friend.” Viewers are supposed to be disgusted by the open anti-Semitism, yet “Ghost World” in many ways cosigns the stereotypes. Rebecca gets a job and finds an apartment on a boring suburban street after graduation. Enid, for her part, thrashes around uncomfortably, going out with an older, nerdy guy and listening to old blues, like Alan Lomax and many a disaffected Jew before her. Enid can’t assimilate — in part, the film suggests, because she’s Jewish. Rebecca can, in part because she’s Aryan — or appears so.

Enid, as misfit, outsider, ugly duckling, is a Jewish stereotype. But so, in her way, is Rebecca as blond, bland goddess. Martin Lund points out in his 2016 book “Re-Constructing the Man of Steel” that one of the most pervasive stereotypes of Jewish women is the JAP, or Jewish American Princess. The JAP, Lund writes, is an “unpassionate figure of passive consumption and consumerism, a product of integration into the middle class….” He concludes, “Significantly, the Princess was not a figure of difference, but of sameness.” Rebecca in “Ghost World,” like Cher Horowitz (Alicia Silverstone) in “Clueless,” is stereotypically Jewish, precisely because her normal, unmarked blonde perfection does not read as stereotypically Jewish.

Many of Johansson’s later roles have capitalized on this tension in Jewish identity, whereby excessive whiteness is itself seen as a mark of difference. In “Lost in Translation,” Johansson plays Charlotte, a young, white, affluent philosophy major in an unfulfilling marriage, adrift in Tokyo. The film wanders through the world of Japanese advertising, and presents the Japanese as shallow, consumerist and tacky — stereotypes not infrequently applied to Jewish culture. Johansson is a normal white girl who can’t speak the language and feels alienated from Japanese religious traditions. “I feel nothing,” she says tearfully in a phone call with her mother. That call with Mother is something of a mini-trope in Johansson’s work. There’s a similar scene in “Lucy.” Lucy is a young woman who has ingested experimental drugs and has frighteningly expanded her brain capacity as a result. With her features oddly frozen, she calls from distant Taiwan — where her super-brain has just learned Mandarin — to tell her mother that she can now remember the taste of her milk when she suckled as an infant.

In “Ghost in the Shell,” Johansson plays a body-swapped perfect white android who has a painful reunion with her Asian mother. Again and again, Johansson takes on the role of a diaspora child yearning for connection with home and family — either because she’s white and lost in a foreign culture, or because she’s Jewish and lost in whiteness.

Johansson is embedded enough in whiteness that she has never yet, to my knowledge, played an openly Jewish character. She comes closer than usual, though, in “Match Point.” Directed by the insistently Jewish Woody Allen, the film is notable for being bereft of Jews — at least on the surface. The story focuses on Chris (Jonathan Rhys Meyers), an Irish tennis pro from a poor family who marries into an upper-crust British family. His perfect assimilation is threatened, however, by his lust for his brother-in-law’s girlfriend, a lower-class American actress named Nola, played by Johansson.

Supposedly, the British family thinks Nola is unsuitable because she is poor and American. But in a Woody Allen film, with a Jewish actor playing the part, it’s hardly a leap to suggest that Nola’s objectionable Americanness is a stand-in for an objectionable Jewishness. Similarly, Nola’s ideal white beauty is also a Jewish beauty. Chris is attracted to her because she looks like a perfect movie star (“So you know the effect you have on men,” he says, leering at her). But Chris also is attracted to Nola because she stands in for his own abandoned poverty and authenticity. She is poor like him; she’s an outsider like him; she is, in the economy of Allen’s film, Jewish like him.

Chris is obsessed with Nola because she’s not upper crust. No surprise, then, that when the affair goes awry and Chris begins to hate Nola’s nagging and demands, it is the echo of Jewish querulousness in her Allen-written dialogue that he loathes. She becomes a kind of ghost of Jewishness past, haunting his perfect assimilated marriage, threatening to drag him back into poverty and stigma.

Chris finally murders Nola. You could see this as Allen’s commentary on the monstrosity of abandoning one’s Jewish roots. But the film mostly sympathizes with Chris; Johansson throws herself into the role of nagging fishwife, while Allen gives Chris all the poignant moments of soul-searching. If we’re supposed to cheer for murderer Chris (and we are), then “Match Point” may be less a warning than it is a triumphant fantasy of assimilation. Chris and Allen externalize their marginality as a feminine other so that they can execute Nola as a misogynist sacrifice to whiteness.

Johansson’s more recent roles have been more awkward outsider than assimilated success. In “Her,” Johansson played the voice of a disembodied AI personal companion who falls in love with her user, Theodore Twombly (Joaquin Phoenix). In one scene, she inhabits/adopts the body of a volunteer sexual surrogate, an attempt at assimilation that goes horribly awry when Theodore freaks out and can’t perform.

The most harrowing vision of passing or not passing in Johansson’s oeuvre, though, is “Under the Skin” from the same year, in which she plays an insectlike alien inhabiting a human shell and hunting the streets of Scotland for unattached men. Johansson’s character has no name, and virtually no personality. Hair dyed black, she drives around in a van, her face slack and unemotional, until she asks some man for directions. Then her features become animated with an energy as brittle as her British accent. The men talk back in thick Scottish dialect — and then she takes them home and, via an obscure process, turns them into empty, gutted bags of skin.

In the film, Johansson’s beauty and desirability are presented as a false shell, from behind which she watches as an outsider the (almost uniformly) white people around her as they shop and eat and talk on their phones. In the final scene of the film, the alien is raped and damaged, and slides out of her hide — the Enid concealed inside Rebecca.

“Under the Skin” presents its alien’s artificiality as a characteristic of femininity. The alien carefully chooses her clothes and is often shown putting on lipstick. The essence of women is (supposedly) sexiness, attractiveness, [surface ??]. The alien is an imposter in a strange world not because she is a Jewish woman, but because she’s a woman, and to be a woman is to be an exterior, a facade and a stranger.

It’s not simply a coincidence, though, that our culture’s feminine ideal at the moment is a Jewish woman whose Jewishness is most notable onscreen in its conspicuous absence. Whiteness, after all, isn’t an ethnicity; it’s an agreement that certain people’s ethnicities and backgrounds will be invisible or erased or folded into an agreed upon standard of “normal.”

Johansson’s career has been so successful, in no small part because she is that normal — a blond, petite “Aryan” with a perfect figure and a nose just distinctive enough to add character. That’s certainly why she, rather than a Japanese actress, got the lead in “Ghost in the Shell,” But Johansson has also been successful because she projects an alienation from her own perfection, an unease with the skin she’s in. It’s an unease with a white consensus that many Jews, and not just Jews, can recognize. Despite, or rather because of, the glamour and power it offers, whiteness can consume you. It hasn’t consumed Johansson, though, if we’re willing to see her Jewishness in her assimilation, in her resistance to that assimilation, and in the space between the two.