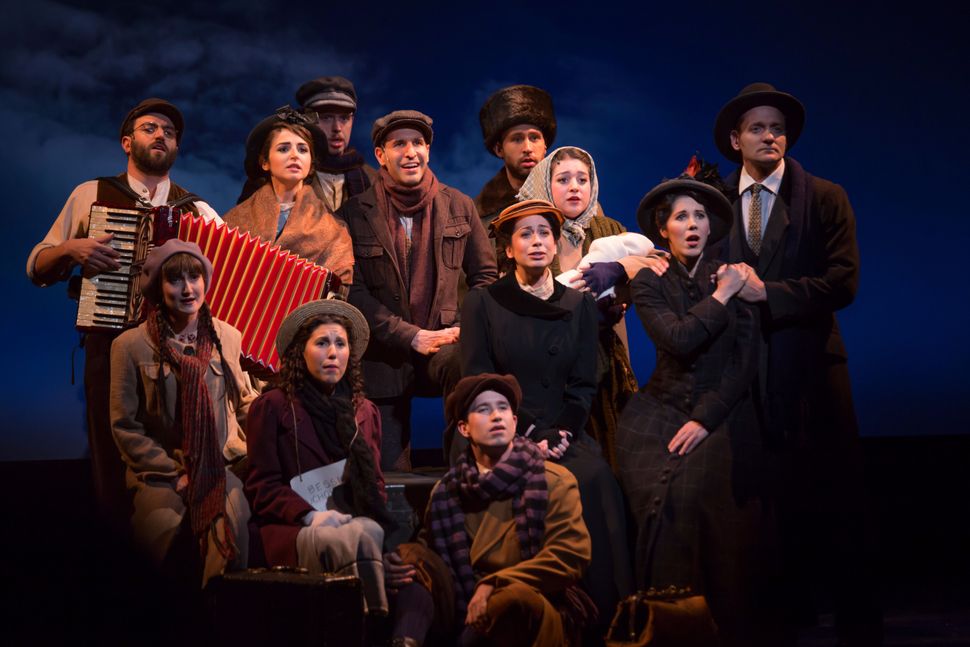 Appropriately located at the Museum of Jewish Heritage in Battery Park within view of the Statue of Liberty and Ellis Island, the National Yiddish Theatre Folksbiene (NYTF) is attempting to redefine its mission and aesthetic while celebrating the Yiddish language, with few if any English words thrown in for good measure. Its renewed commitment to keep Yiddish alive started with its 2016 Drama Desk winner “The Golden Bride,” a streamlined version of a rediscovered 1923 Yiddish operetta.

In its current musical, “Amerike The Golden Land,” — a reconceived version of its original incarnation, spawned in 1984 to commemorate the Forward’s 85th anniversary and not coincidentally the Jewish immigrant experience — nothing but Yiddish is spoken/sung throughout (accompanied by English and Russian supertitles).

Equally curious, the Moishe Rosenfeld, Zalmen Mlotek valentine to their forefathers (and mothers) has morphed into a more modern, trendy, and inclusive production, not least the players who have been brought on board.

In the past, most (if not all) the actors were Yiddish-speaking Jews with varying degrees of professional experience. Today the goal is to find the best performers, most of whom are theater veterans. In “Amerike” virtually none is a Yiddish-speaker and the actors may or may not be Jewish. Whatever its limitations the entertainers are top-notch — special kudos to Glenn Seven Allen and Daniel Kahn — and they’ve mastered the Yiddish to boot.

Still, the language sounds a tad homogenized, a Yiddish devoid of varying dialects, pronunciations and cadences. But the blandness is symptomatic of a larger problem. The whole production feels generic.

Regardless of what’s happening in the story — including references to the Triangle Shirtwaist fire and the Depression — the iconic tunes of the era tapped for the piece often feel incongruous and worse the cast has been directed to evoke high-octane show people who could be belting it out on virtually any Broadway stage. This kind of piece cries out for smallness intimacy, and charm.

But most serious, the narrative itself is so-been-there-done-that there are no new insights to be had (at least none was evident).

Once again we’re hearing about the rough (at moments comically absurd) lives of Eastern European Jews arriving in New York at the end of the 19th and into the 20th Century escaping wretchedness in the old country only to discover poverty, struggle, disappointment, and tragedy in their new “golden land.” Still, in the end they feel a tremendous sense of gratitude to America; a profound optimism as they contemplate their futures.

The oft told tale no longer resonates for me, but I’m an anomaly. To judge by the audience response, especially to the golden oldies — from “Brother Can You Spare a Dime” to “Roumania, Roumania” played by a wonderful seven-piece Klezmer band — the show hits an emotional chord and the nostalgia has not worn thin. Theatergoers enthusiastically clapped their hands in rhythm and sang along with the performers on stage more than once.

To what degree they embraced or even noticed the reinvented subtext is arguable: the Jewish immigrant experience is a pointed example but fundamentally no different from that of any other national/ethnic group who has come or, more to the point, wants to come now “yearning to breathe free.” Lots of Emma Lazarus references and man, is it topical. And just in case you haven’t gotten it writings in a host of languages are projected on to the back wall.

The most recently produced “Fiddler” also suggested without dialogue (and it was subtly conceived) the universality of the immigrant trip. That’s de rigueur. You can no longer say anything just about the Jewish experience without referencing its relevance to other groups. Politics and economics inform each other; both inform aesthetics.

It’s no secret that the 103-year-old NYTF is trying to cultivate a new, younger, mixed audience—it’s essential if the theater is to survive—while reaching out to a larger ethnic theater community. Under the tenure of its newly appointed CEO and producer, Christopher Massimine, the theater recently initiated The Immigrant Arts Summit, a two-day symposium, hosting panels that featured speakers from the Irish Repertory Theatre, Kairos Italy Theater, Pan Asian Repertory Theatre, and Repertorio Español, among others.

NYTF has also branched out to serve as a producer on Broadway’s “Indecent,” a multi-leveled Tony winning production inspired by Sholem Asch’s controversial 1907 play, “God of Vengeance,” that uses the original work and its history to explore larger themes about censorship, tolerance, and the evolving experiences of the LBGTQ community.

As for NYTF’s attempt to make the Jewish immigrant story current, its “Amerike” is neither fish nor fowl. It trivializes the Jews’ experience but doesn’t make their story (not the one told here) any more gripping; nor does it say anything of consequence about anyone else either.