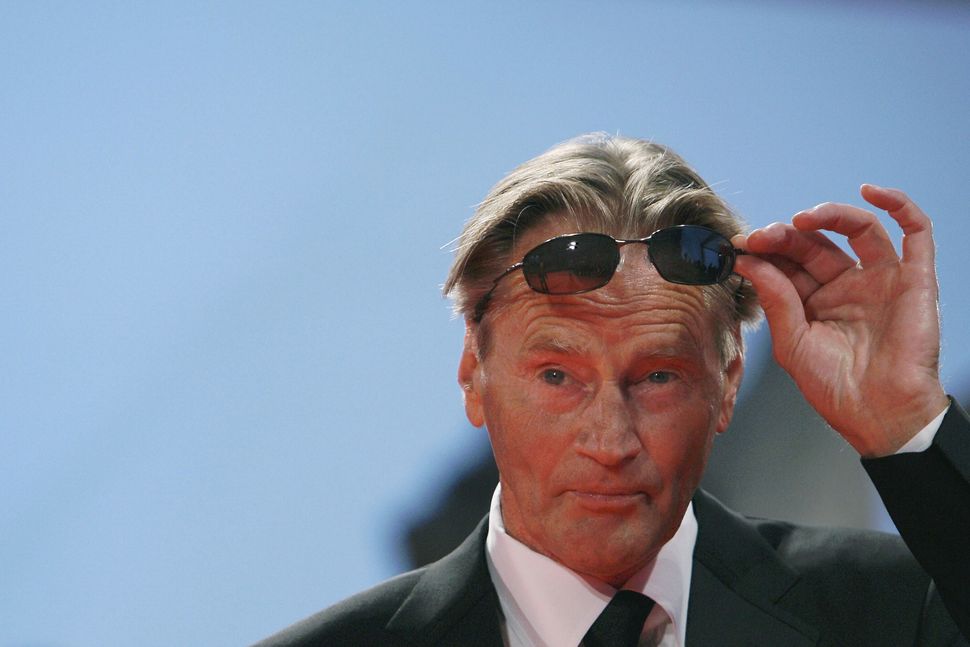 The playwright and actor Sam Shepard, who died on July 27 at age 73, was to all outward appearances as non-Jewish as may be imagined. Yet his writing hovered around such American Jewish creative spirits as Arthur Miller, Bob Dylan and Joseph Chaikin, among others. In such plays as the “Curse of the Starving Class” (1976), “Buried Child (1979), “True West” (1980), “Fool for Love,” (1983) and “A Lie of the Mind” (1985), he explored dysfunctional American family life. These dissections could easily be likened to Miller’s “Death of a Salesman,” among predecessors, yet the voices of Shepard’s characters are more like abused children who never grew up or got on with their lives.

Shepard’s work is sometimes more overtly rife with symbolism than Miller’s, despite evident points of comparison. In “The Cambridge Companion to Sam Shepard,” Christopher Bigsby wrote: “Betrayal is as basic a theme to Shepard as it is to Arthur Miller.” Celebrating Miller’s centenary, Shepard paid homage yet again by participating in an all-star reading alongside Ellen Barkin and Tony Kushner, among others, directed by Gregory Mosher at Broadway’s Lyceum Theater for the benefit of the Arthur Miller Foundation.

Why should Shepard have encountered so many influential Jewish creative influences? His prose collection “Cruising Paradise: Tales” (1996) set in the West, new and old, offers a potentially revealing observation. Like his plays, Shepard’s prose is obsessed with failure to find identity. In the tale “The Self-Made Man,” the protagonist attempts to understand his link to his American forebears:

In Shepard’s writings, a lost sense of self is often expressed by adults speaking in plaintive, childlike wails. Part of this anguish was in trying to understand or identify roots, and Jewish heritage – “almost biblical” characters – might have represented some form of constancy or stability in a world otherwise run amok.

In Shepard’s early years on the experimental theatre scene, he found himself working with several Jewish colleagues. They included Jacques Levy (1935-2004), a songwriter, theatre director, and clinical psychologist and Murray Mednick (born 1939), founder of the Padua Hills Playwrights Workshop/Festival which welcomed Shepard in the 1970s. Shepard co-authored the screenplay for the film “Me and My Brother” (1969) by the photographer and documentarian Robert Frank, of Swiss Jewish origin. Among the other screenwriters were Frank himself and Allen Ginsberg. The movie is about Peter Orlovsky, Ginsberg’s longtime lover, and his schizophrenic brother Julius, who appears, when not replaced in his own role by the Brooklyn-born Jewish actor, director, and playwright Joseph Chaikin (1935-2003).

Performance was another one of Shepard’s talents, and he is possibly best known to the general public for appearances in “Days of Heaven” (1978), “The Right Stuff” (1983), for which he was nominated for a Best Supporting Actor Oscar, and “Blackthorn” (2011). Perhaps his most influential early performance experience was in accompanying Bob Dylan on the Rolling Thunder Revue of 1975 as screenwriter of the resulting film “Renaldo and Clara” (1978) He also cowrote “Brownsville Girl” on Dylan’s “Knocked Out Loaded” (1986) album. Shepard kept a tour journal, later published, expressing the revelation of one level of American Jewish society and culture:

“Hundreds of over-the-top Jewish ladies are firmly entrenched in the Seacrest hotel in Falmouth, Massachusetts before we arrive. They are hell-bent on a strange (to a “Mick”) Chinese form of dominoes called Mah-Jongg… So imagine their surprise when, late one evening, in the midst of tournament fever, the manager of the hotel announces that there is to be a special poetry reading by ‘one of America’s foremost poets, Mr Allen Ginsberg!’ A warm round of fatty applause. He too is of the same faith after all… The ladies smile charitably and Allen begins his piece. His long, terrifying, painful prayer to his mother. These are mothers too, but the needle’s too close to the vein. The mothers go from patient acquiescence to giggled embarrassment to downright disgust as Allen keeps rolling away at them. His low rumbling sustained vowel sounds becoming more and more dirgelike and persistent. Dylan sits in the background, back against the wall, hat down over his eyes, listening stilly. Since I was raised a Protestant, there’s something in the air here that I can’t quite touch, but it feels close to being volcanic. Something of generations, of mothers, of being Jewish, of being raised Jewish, of Kaddish, of prayer, of America even, of poets and language, and least of all Dylan, who created in himself a character somehow outside the religion he was born into.”

As always preoccupied by roots and heritage, Shepard discerned in the Judaism of Dylan and Ginsberg something lacking in his own upbringing. He subsequently proved supportive when friends endured challenges, such as years of cardiac problems for Chaikin, who wrote to Shepard from hospital in 1978, declaring: “I want to retell you that your work and coming to know you-your life and consciousness continues to be a source of light and strength for me.” As if reciprocating, after Chaikin suffered a stroke and aphasia in 1984, Shepard participated in his therapy, and continued to collaborate with him artistically. This kind of devotion reminds us that Shepard’s most lasting reward from his Jewish friendships may have been in building a creative community, resulting in his ever-popular plays that will surely continue to be staged in future years.