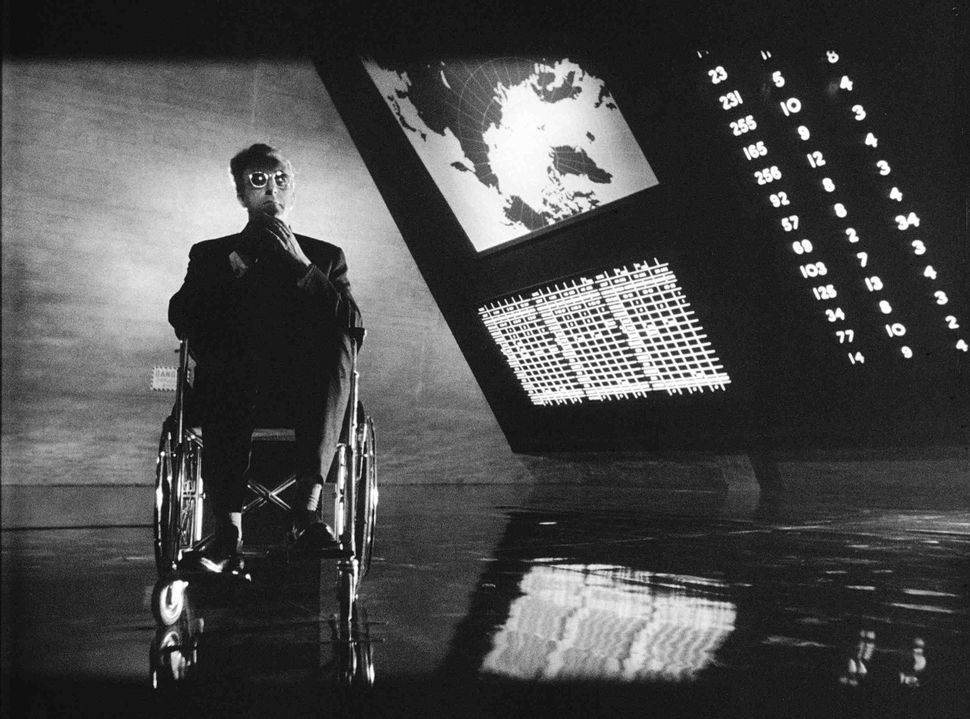 As Donald Trump and Kim Jong-un engage in nuclear brinkmanship, very real fears of a nuclear Armageddon have emerged. Given that Armageddon has a Hebrew origin (via the Greek translation of Har Meggido), it is not surprising that Jews have had a considerable interest in nuclear apocalypse. Consider the title of MAD magazine, echoing 1950s fears of Mutual Assured Destruction or the of Jewish director Michael Bay’s 1998 film, “Armageddon.”

Indeed, many commentators have remarked on how similar current events are to Jewish director Stanley Kubrick’s 1964 “Dr. Strangelove or: How I Learned to Stop Worrying and Love the Bomb.” In what he described as his “nightmare comedy,” Kubrick conceived a scenario in which a mad general, obsessed by the purity of his “essence,” that is his “precious bodily fluids,” launches a pre-emptive nuclear strike on the Soviet Union. This, in turn, precipitates a series of events that, unless reversed, will lead to the automatic detonation of a Russian doomsday device that threatens to eradicate all human life on the planet.

Kubrick even populated his movie with ersatz Jews — figures who, while not explicitly Jewish on screen, could be read as such. Air Force General Buck Turgidson, memorably played by George C. Scott was originally to be called General Schmuck. While he lost this moniker, he still very much plays like one. The US president was played by Jewish actor Peter Sellers, as was the character who gave the film its name, Dr. Strangelove. This ex-Nazi scientist was a composite of such figures as Edward Teller, Herman Kahn and Henry Kissinger. Kubrick even originally intended to call Dr. Strangelove von Klutz, a Yiddish spin on a Teutonic name.

The whole film is one big sexual joke. The famous War Room is full of hyper-masculine egos, more concerned with sex than imminent disaster. And from Dr. Strangelove’s opening refuelling sequence to its final climactic nuclear orgasm, caused by Major King Kong riding an enormous phallic bomb, rodeo style, into its target, it uncannily anticipates President Trump’s protestations over his own potency.

Meanwhile, that same year Sidney Lumet released his own film on the topic, “Fail-Safe.” Lumet’s version of Eugene Burdick and Harvey Wheeler’s 1962 novel of the same name is strikingly similar to the plot of “Dr. Strangelove” so much so that a lawsuit was threatened. Kubrick successfully delayed the release of “Fail-Safe” so that his film was released first. He needn’t have bothered for where “Dr. Strangelove” made deeply serious points under the guise of black comedy in the vein of MAD, Lumet played it straight. His drama is indebted to Genesis 22 and Abraham’s sacrifice of Isaac. In the final chapter, entitled “The Sacrifice of Abraham,” as an American bomber proceeds to its Soviet target, the US President (Henry Fonda) offers to bomb New York City in order to prevent a Soviet counterattack.

Like “Strangelove,” at the movie’s heart is a key, but this time explicitly so, Jewish character. This is national security advisor, Professor Walter Groeteschele played by Walter Matthau. In the final analysis, where Strangelove’s generals, politicians, and diplomats are more concerned with their sexual prowess, “Fail-Safe” presents wiser, more rational heads.

Again in 1964, “Seven Days in May” was a political thriller directed by John Frankenheimer and scripted by Rod Serling. This movie envisaged a military-political coup to take over the government of the United States following the negotiation by the president of a disarmament treaty with the USSR. The plot is uncovered by Colonel “Jiggs” Casey, played by Kirk Douglas who succeeds in preventing it and disaster is averted. Serling, though, did go on to make a film about a post-apocalyptic world, one that had largely destroyed itself through nuclear warfare. That film was “Planet of the Apes” in 1968, which provided a stark warning about the dangers of nuclear warfare.

Jewish filmmakers, actors, and writers warned of potential nuclear disaster in what was another era — the height of the Cold War. But although these films are over fifty years old they should be watched again now.