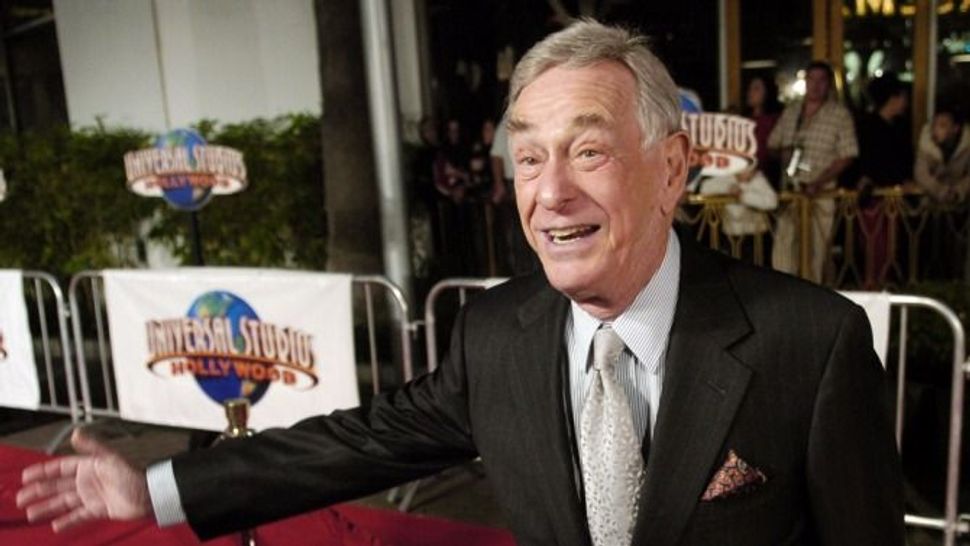 Shelley Berman, who died on September 1 at age 92, was the Gregor Samsa of American comedy. Like the protagonist of Franz Kafka’s “Metamorphosis,” Berman was alert to the insectification of modern life, whatever removes humanity and sparks rage. Focusing on petty occasions for anger made him the spiritual forefather of comedians, especially Larry David, who base their explosive wit on frustration over trivia. Fittingly, Berman, born Sheldon Berman in Chicago, is best remembered today for playing David’s father in TV’s “Curb Your Enthusiasm.” In Berman’s heyday, he performed twisted around a stool, ostensibly as a “sit-down” comedian, rather than a stand-up, he claimed. His consciously Kafkaesque routines included calling from a hotel room to the front desk, panic audible in his voice, because his room had no window or door. His contorted bodily swivels – he was trained as an instructor at Arthur Murray Dance Studios during a low career moment – were expressive choreography.

The angst in his contorted postures turned moments of everyday frustration, such as phoning a department store, into mini-surreal tragicomedies. Yet unlike the latter-day eruptionsacting of Larry David, Berman’s routines were always explicitly intellectual and literary. The telephone was at the heart of his routines as a traitorous vehicle of communication. Berman was permanently ill-at-ease in a world of failed promises of modern technology to bring people together. His dark message was the antithesis of the gentle, sunny routines of Bob Newhart, a Midwestern Catholic comedian whose act also featured phone routines. Nor did Berman display triumphant Yiddishkeit on the phone, as did the clarion-voiced Betty Walker (1928–1982; born Edith Seeman to Latvian Jewish parents). Yowling over the phone to a crony, “Hello, Ceil?” Betty Walker and her shtick were immortalized on the “You Don’t Have to Be Jewish” comedy albums. An earlier comedian, George Jessel, likewise scored with a phone routine (“Hello Momma”) of saccharine sentimentality. By contrast, Berman’s solitude onstage was amplified by the very act of telephoning. He was reminded of his existential loneliness by trying to make contact with another person.

If anything, Berman on the telephone was closest to the early, nervy routines of Mike Nichols and Elaine May, with whom he had worked in the mid-1950s as part of Chicago’s Compass Players, a troupe later renamed The Second City. Berman, Nichols, and May even appeared briefly as a comedy trio. Perhaps not coincidentally, a telephone led to a long professional eclipse for Berman. As a perfectionist, in 1963 he was preparing a soon-to-be-filmed live TV broadcast when a backstage phone’s ring distracted him. Staff promised to attend to the problem, but the same phone rang during the broadcast, and in a rage, Berman ripped the offending phone off the wall, an action captured for the delectation of TV viewers. This led to Berman to be classified as difficult to work with, he felt, and his once-thriving career began to diminish. In an unstable profession, surely his marriage to Sarah Herman, a fellow acting student at Chicago’s Goodman Theatre, which endured from 1947 until now, proved to be a key to survival.

Berman’s diverse talents were another factor. His singing and dancing abilities made it possible for him to star in “La Cage aux Folles” in the Poconos and “Fiddler on the Roof” in road productions. His inherently suave manner and mellifluous baritone speaking voice also made him at home on TV’s snobbiest game show of the 1960s, “What’s My Line,” where decorum was all. The strain was sometimes evident, as Berman chewed his lip with anxiety as he formulated convoluted questions required to discover a guest’s profession. Latterly he appeared in such screen comedies as “Meet the Fockers” and “You Don’t Mess With the Zohan,” as well as the TV series “Boston Legal,” where he was a senile judge. In “Curb your Enthusiasm,” his Mister Magoo-like befuddlement epitomized Jewish parents willing to go to grotesque lengths to avoid “bothering” their offspring, as when he neglected to inform David’s character of the death of his mother. Doing so, Berman wisely underplayed in contrast with David’s hamming. Despite his success with these comic roles, serious drama was where Berman’s heart appeared to lie.

Always drawn to the avant-garde, he accepted a bit role as a “Stoned Beatnik” in an experimental cult horror screamer, “Dementia” (1955). In a 1959 episode of the private eye series “Peter Gunn,” Berman plays Danny Holland, a paranoid comedian who believes his wife is trying to kill him. While Danny Holland also performs a phone routine while sitting on a stool, his sweaty, jittery vibe with cigarette in hand and eyes wildly gleaming is unlike Berman’s ingrained elegance, possibly a nod to his friend Lenny Bruce. This willingness to cut close to the bone shows Berman as an actor of dramatic plausibility, akin to Martin Balsam.

In “The Mind and the Matter,” a 1961 episode of Rod Serling’s “The Twilight Zone,” Berman portrays a humble office worker, Archibald Beechcroft, who attempts by mental concentration to eliminate his fellow employees and others who overpopulate the world. These and other small screen appearances were fine preparation for “The Best Man” (1964) a political drama in which Berman ideally incarnates a slimy blackmailer. Amidst the stoic clenched jaws of actors such as Henry Fonda and Cliff Robertson, Berman veers off into sniveling insanity, as if belonging to another film. His plausible rendition of jittery lunacy in a stately, pompous film is as unsettling as the pianist and professional neurotic Oscar Levant’s self-portrait as an asylum inmate in “The Cobweb” (1955).

More than in any comic or dramatic role, Berman may have shown his humanity, patience, and forbearance best during his decades teaching writing at the University of Southern California, where he also studied poetry under the guidance of James Ragan. Berman even produced a collection of his own verse and taught a weekly poetry class at the Motion Picture & Television Country House and Hospital, a retirement community in Woodland Hills, California. Over the years, his carefully honed routines required word-for-word punctiliousness. Jack E. Leonard, a broader comedian, japed that to understand highbrows like Berman, audiences needed to pass entrance exams. In his lightest early publications, Berman underlined that “semantic interpretations are in the mind of the beholder.” Whether jesting about the vagaries of hotel stays, inevitable for a touring comedian, or other minor tortures of life, Berman always gave a poet’s attention to his writing while retaining a haimish quality that endeared him to generations of audiences.