How Monty Hall Made A Deal For Jewish Charity 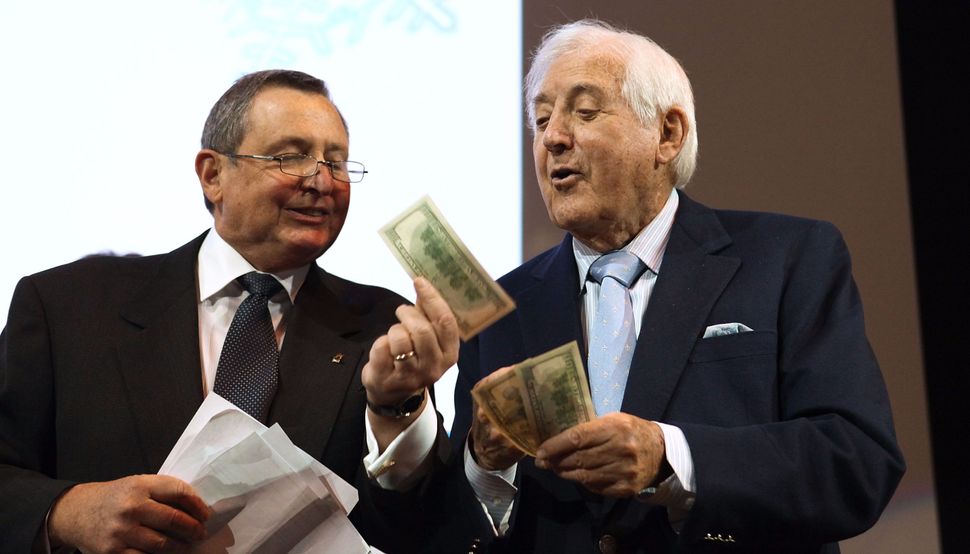 Although Monty Hall, who died on September 30 at the age of 96, is chiefly remembered for co-creating and hosting the long-lasting TV game show “Let’s Make a Deal,” first broadcast in 1963, his most enduring legacy may be service to Jewish charities. Born Monte Halparin in Winnipeg to Orthodox Jewish parents, Hall would follow in the footsteps of his mother Rose, who served as Canadian National Vice President for Hadassah and National Chairman of Youth Aliyah in Canada.

In the anthology “What Israel Means to Me: By 80 Prominent Writers, Performers, Scholars, Politicians, and Journalists”, edited by Alan Dershowitz, Hall describes Youth Aliyah as the “organization that rescued the surviving children of the Holocaust in Europe and brought them to what was then Palestine and later, of course, Israel.” One year, Hall attended an exhibition tennis match between Israeli and Canadian Davis Cup teams to celebrate the opening of a new sports center at Ramat Hasharon on Israel’s central coastal strip. Noting the Israeli players whose families had made Aliyah from different countries, Hall observed:

“As the team was introduced and all these countries were named as the birthplace of their families, I realized that these were the children of the children whom my mother spent her whole life saving and bringing to a new life in Israel. My emotions were overflowing. I wept. This is what my mother had been working for — what I’d been working for — what we had all dreamed of. Not only saving the children, but giving them a land where they could grow and enjoy freedom. These were not just tennis players. This was the building of a new nation – how important Israel was to these children, how important Israel is to me.”

These fervent goals were inculcated during an often-challenging, impoverished childhood in Winnipeg, where, as Hall noted in his 1973 memoir “Emcee,” Jews were “often subjected to ridicule and discrimination.” In another anthology of reminiscences, Alan King’s “Matzo Balls for Breakfast and Other Memories of Growing Up Jewish” Hall recalled his upbringing in a Winnipeg house in which fourteen relatives shared a single bathroom. Walking his great-grandfather, and later his grandfather, to shul on Shabbat while discussing life was a way “of being Jewish by osmosis” for Hall. Riding a bike to deliver kosher meat during harsh Canadian winters, Hall would transcend his surroundings by fantasizing that he was performing on radio programs with stars such as Jack Benny, Eddie Cantor, or Bert Pearl and the Happy Gang. The last-mentioned, a Canadian Broadcasting Corporation variety show, featured Pearl (born Bert Shapira) a Winnipeg Jewish boy who dreamed of becoming a brain surgeon but settled for being a performer instead.

As if imitating his idol, Hall also pursued pre-med studies, but ran up against notorious anti-Semitic quotas then in place. The University of Manitoba’s School of Medicine was successfully challenged in 1944 by a local lawyer, Hyman Sokolov, who demonstrated to the Manitoba legislature how Jewish students were excluded, adding: “It is nauseating to contemplate a system which weeds out the fit and the capable, while it permits incompetent and unqualified students to obtain a preference.” By the time the policy was overturned, Hall, who had been repeatedly rejected despite high grades, sought employment instead in the world of radio. His name was changed to Monty Hall, by his boss at a Toronto radio station who claimed the shorter, less ethnic version was catchier.

Although his academic dreams were dashed, Hall did wind up inadvertently as the subject of much university-level ratiocination, as “The Monty Hall Problem: The Remarkable Story of Math’s Most Contentious Brain Teaser” (Oxford University Press) establishes. Dealing with the classic “Let’s Make a Deal” choice of three doors, behind one of which is a major prize and the others gag gifts, mathematicians calculate probabilities and conclude that counter-intuitively, if one door is opened, the contestant improves chances of a happy result by changing his/her original door choice. Hall himself had to change his original choice, and against the odds wound up with a rewarding, Tzedakah-filled result.

How Monty Hall Made A Deal For Jewish Charity