How I Fended Off My Own Personal Harvey Weinsteins 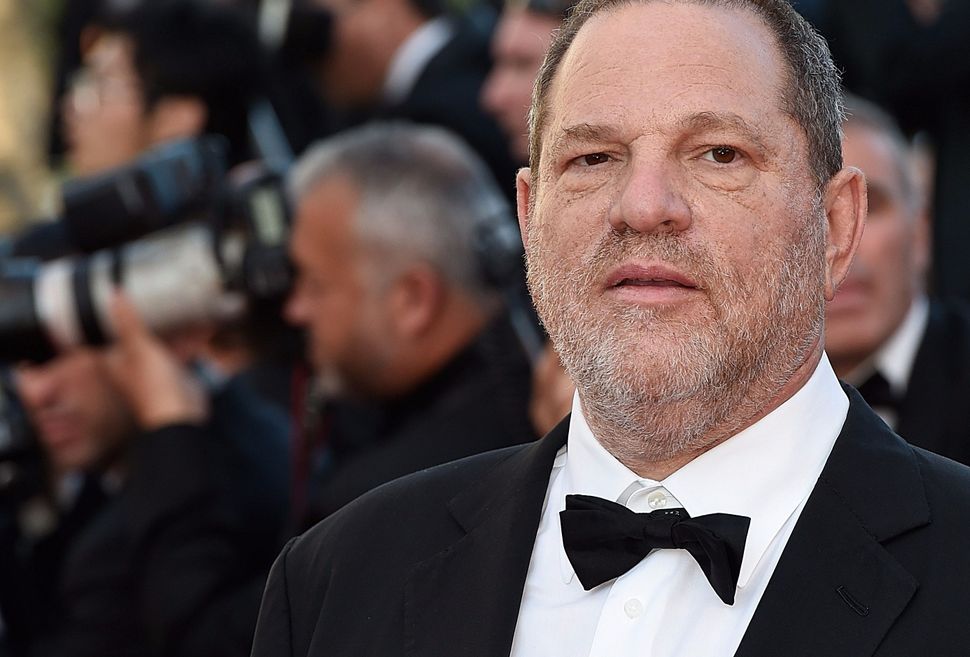 “Oy, this is bad for the Jews” is how my parents would have reacted to a scandal involving a Weinstein. They screened every newspaper story with that criterion. I can imagine them bemoaning that calling earthquakes Arlene, Gert, Irma, and Nate would also be “bad for the Jews.” The storm named Harvey, I’m guessing, like The Weinstein Company, may be renamed. If my parents were alive today, they would recognize that what the film executive did was also bad for women. Forty two years after the term “sexual harassment” was coined, victims of sexual assaults were still afraid of speaking up.

Working in show business for decades, first as a secretary and later as a comedy writer, I wasn’t surprised to read about a man abusing his position. “You’ll never work in this town again,” a cliché, was the threat the powerful used to throw their weight around. And the older Weinstein brother had plenty of weight. Reading about his anger and abusiveness reminded me of one particularly aggressive boss, a famous, narcissistic performer/director who humiliated employees and preyed on women. Late one afternoon, as I was preparing to leave, a dark-haired beauty came in, telling me, “I’m here for casting.”

An actress had already been replaced by another who’d apparently been more user-friendly. “You are?” I said, hoping my inflection would send a signal.

It did. “Has the part been cast?” she asked.

I escaped the star’s attention except for the day he summoned me to his enormous office, hit a button under the desk that caused the two doors to slam shut and lock before asking, “Are you scared?”

A 23 year-old virgin, I was terrified, but I’d been told you shouldn’t let an animal know you’re scared. “No,” I said. “What’s the worst you can do? Fire me? I’ll find another job in a second. And maybe I’ll get paid for overtime.” He pressed the button again and released me from captivity. I sensed I’d won this round. Shortly before I quit, I discovered the entire rest of the staff was being overpaid, which explained why they put up with being ridiculed.

It wasn’t often that something untoward was directed towards me, but during a stint as a temporary secretary on a television show, I was asked out by a well-known musician about whom it was said, “He likes to drop his pants.” Except for a statue in a museum, I’d never seen a man naked and didn’t want him to be my first. Nevertheless, excited to have a date with someone famous, I convinced myself that since I had a roommate and he was taking me to a restaurant, I’d be safe.

Being joined by one of his colleagues helped me relax, as did three Navy Grogs. Walking to his car, however, I was dizzy and staggering. After dropping off the other man at the hotel where they were both staying, my date said, “I need a bathroom. Do you mind if we go back?”

Assuming he meant to the restaurant, I agreed. But he swung around and headed to the hotel, sending me into a state of panic. It didn’t occur to me to suggest we find a bathroom in the lobby. Instead, my plan was to keep looking downward so if he exposed his body, I would see his feet and bolt.

After using the bathroom, he emerged and said, “How about a kiss?”

“I think I’m going to vomit,” I blurted out. Eager to get me home, he beat me to the door.
My experiences were tame compared to those accosted by Harvey Weinstein. As a comedy writer, I was less vulnerable than female actors, but I did have experiences with misogynistic men. A producer who’d kept me waiting for 35 minutes came out of his office only after my agent called to let him know he’d just heard from me and I was preparing to walk out. Using a patronizing tone appropriate for a toddler who’d misbehaved, he said, “Are you the one causing all the trouble?”

“No, I’m the one who was here on time for our meeting,” I spat out, “and I have no interest in working with you.”

Combative only when provoked, I resented an agent greeting me at his office with, “I hear you’re tough in a room.”

“If you do,” I said, “I’ll tell you everyone who said horrible things about you.”

Jokes were my ammunition when situations got sticky. If Harvey Weinstein had asked me to watch him take a shower, I’d likely have laughed and said, “No way. My hair will frizz.”

According to The New York Times, allegations that he’d overpowered women in hotel rooms date back to 1990. At least eight were silenced by settlements he offered. His threats along with shame and the fear of damaging their careers kept others from talking. It took his being dethroned and seeing what happened to Bill Cosby, Bill O’Reilly and Roger Ailes to empower victims to speak up. Other women may have been receptive, or pretended to be. I’m staggered that someone running a movie company, with a wife and children yet, found the time to badger so many women. Then again, he obviously didn’t spend hours at the gym.

Employees admit they’d witnessed or heard that he’d sexually accosted women though board members have claimed they weren’t aware of it or believed the settlements were to cover up consensual affairs. His behavior was hardly a secret. Seth MacFarlane got a big laugh at the 2013 Oscars, telling the nominees for best supporting actress, “Congratulations, you five ladies no longer have to pretend to be attracted to Harvey Weinstein.”

Two years ago, a model who’d been groped by the movie magnate was brave enough to report it to the police. They created a sting operation. Equipped with a recording device, she returned and asked him why he’d touched her breasts the previous day. His reply, “I’m used to that,” was essentially an admission of guilt yet there were no repercussions.

Over the years, reporters attempting to cover this story were thwarted. Weinstein allegedly threatened Ronan Farrow with a lawsuit in an effort to stop the story he was working on. It just came out in The New Yorker and raised the stakes with multiple women alleging that the movie mogul had raped them. That caused the gloves — and maybe the producer’s legendary bathrobe — to come off. His wife, designer Georgina Chapman, separated from him.

Before admitting he had a problem and would get treated, Weinstein tried to defend himself by saying, “I came of age in the ‘60s and ‘70s, when all the rules about behavior and workplaces were different. That was culture then.” I’m guessing he has a cell phone, computer and a flat screen TV so he’s adapted to other changes.

The entertainment industry has been complicit in giving safe harbor to men like this so it’s encouraging that studio heads refused Harvey’s request for them to intervene and prevent his getting fired by his company. Let’s hope this will lead to long-overdue conversations and changes that will ensure the workplace is comfortable for women.

Before boarding a private plane that would take him to a rehab facility, the disgraced producer told paparazzi, “You know what? We all make mistakes. Second chance, I hope.”

Hollywood likes a story to have a happy ending. That would be if Harvey Weinstein faces legal charges and, instead of threatening others, hears, “You’ll never work in this town again.”

*Sybil Sage is a television writer whose credits include “The Mary Tyler Moore Show” and “Northern Exposure.”

How I Fended Off My Own Personal Harvey Weinsteins