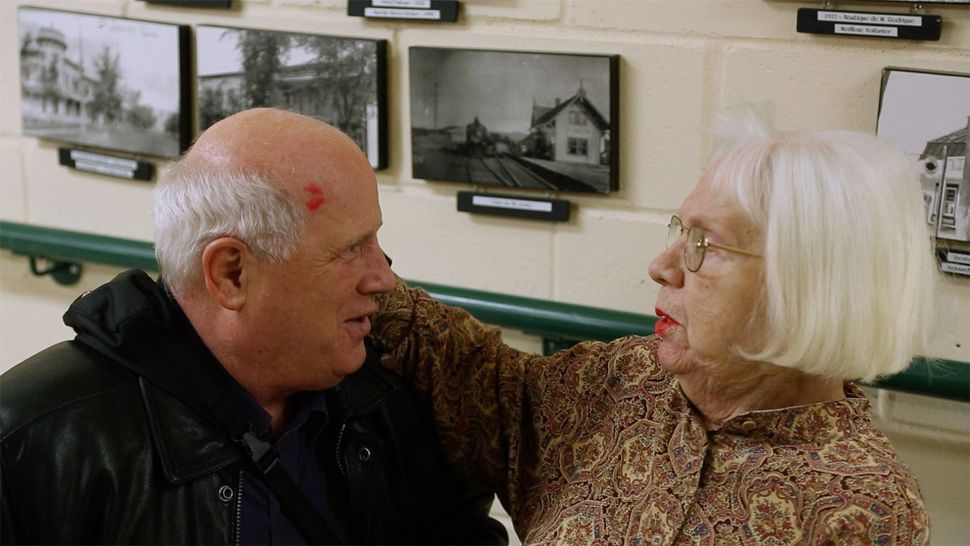 For 67-year-old Shep Shell, learning he had a brother and then meeting him for the first time in 2013 was a mind-blowing experience on many fronts. But that was just the beginning. He also learned that his mother, whom he believed had died in a German displaced persons camp in the post-World War II years, was alive, too. And there was more. He and his brother spent time with their mother shortly before she died in a Quebec-based nursing home, and along the way they discovered that there was another brother whom neither man knew about. The events are recounted in the stunning new documentary “Aida’s Secrets.”

“I have a whole new family,” Shell said in an interview, floored even in retrospect. “It means I’m not alone. But I sometimes think I wasn’t as honest in the film as I could have been. You get caught up in it. You don’t want to be critical. You try to understand the different eras, the different moralities, but how can you deny your own child? I still can’t understand it. It still bothers me. On screen I seem far more forgiving towards my mother than in fact I am.”

“Aida’s Secrets” explores themes of identity and the plight of displaced persons. It also reveals cultural attitudes toward women and what constituted morality 75 years ago. The world it examines is one that was shrouded in lies, omissions and secrecy.

Just ask Shell or his Israeli brother, Izak Szewelwicz, a municipal gardener who decided to launch an investigation into his background after visiting the sites of concentration camps in Poland with his granddaughter. Even as a youngster — tall, muscular, blond-haired and blue-eyed — he felt somewhat different from everyone else.

When he was 11, his parents told him he was born in a DP camp in 1945 and shipped off as a toddler to Israel, where they adopted him. At his bar mitzvah he met his biological mother, Aida (pronounced Ida) Zasadsinska, who maintained a sporadic connection to him over the decades. Though she told him that her husband, his father, had died and that as a single woman she was in no position to keep a child, she never mentioned his brother.

Starting his research at Yad Vashem, it didn’t take Szewelwicz long to discover that he had a brother, Shell, living in Winnipeg. When he shared his news with his nephew Alon Schwarz — a video editor who worked in high-tech management — a Pandora’s box was opened.

“When I was about 5 or 6, I was playing in my grandfather’s garden when a woman I never met comes over to me and tells me that Izak has a brother,” Alon Schwarz recalled. “To this day I have no idea who she was or why she told me this. I went into the house and told my grandfather what she said. He was always a quiet, gentle man, but this time he went nuts. He grabbed me by the shoulders and shook me. He said: ‘This is a secret. You will never tell this to anyone.’”

Schwarz kept the secret for more than 30 years before sharing it with his brother Shaul Schwarz, who urged him to keep it under wraps. But when he and Szewelwicz spoke, Alon Schwarz couldn’t hold it in any longer.

“Izak was furious at the deception and threw Alon out of the house,” said Shaul Schwarz, an Israeli-born photojournalist/filmmaker who now lives in Brooklyn. “Alon calls me and says: ‘We should have talked about this with him years ago. I’m going to go find Shep.’”

Tracking down Shell was not all that difficult. Cobbling together the narrative was another story; Alon Schwarz had to pore over dozens of archives in Israel, Amsterdam, Germany and the United States. He still marvels at the vivid materials he uncovered, which evoked the thriving life that flourished in DP camps — from sports activities to concerts to the many love affairs that blossomed.

The Schwarz brothers interviewed as many people as they could find who witnessed life in the DP camps, in addition to Zasadsinska’s friends and acquaintances.

The brothers learned that Zasadsinska had been pregnant with Izak when she arrived at the DP camp, where she met and married the love of her life, Grisha. He, presumably, did not want Izak around as a reminder that he was the son of another man, especially after Zasadsinska had given birth to Grisha’s son, Shep, who was born blind in 1946. Zasadsinska shipped off Izak to Israel, and shortly thereafter her marriage to Grisha fell apart. For reasons that are not entirely clear, she agreed to drop out of Shep’s life altogether and allowed Grisha to take him to Canada, where she ultimately relocated as well.

Still, she made no effort to contact her son, who was told by Grisha that his biological mother was dead. Shell describes an unhappy family from whom he was estranged early on; in the end, his father disowned him. When Grisha died, Shell inherited nothing. As a blind man he battled further challenges. Nonetheless he was a high-tech computer engineer for IBM and a Para-Olympian in the cross-country skiing and biking categories. He ran six marathons.

Unlike Szewelwicz, who was thrilled at the prospect of meeting his brother, Shell was cautious, even reluctant, at first. And those feelings were amplified when he learned his mother was alive and not too far away.

By his own admission he is aloof, skeptical, even cynical. “I’ve been dealing with abandonment issues all of my life,” he said. “I don’t open myself to being hurt very easily.”

In the film, when they meet Zasadsinska — a frail yet tough 89-year-old woman who keeps a crucifix on her wall — she is moved to see her sons (especially Shell), but remains silent to many of their questions, or insists she has no recollection of what they’re talking about. When they ask her about a third brother who, according to birth records, she also gave up for adoption, she says she doesn’t “remember” ever being pregnant with a third child. She’s not a good liar. “I did the best I could,” she says.

Though it’s never stated, there are hints that Szewelwicz’s father may have been German, perhaps even a Nazi, and that Szewelwicz may have been the product of an intense romance, a rape, or a consensual sexual relationship as a means of survival for a woman whose options were virtually nonexistent “We are not concealing anything we know,” Shaul Schwarz said. “Still, there are caps on what information we offered. We are filmmakers, but we’re also members of the family.”

Szewelwicz decided to do no further research into his paternity. Whoever his biological father was — and it’s possible he doesn’t want to know the truth — the odds are he’s long gone. Either way, Szewelwicz forgives his mother, believing that everything she did was an effort to protect him. [He adds, “I better understand my mother now and the feelings that came from inside her soul.” For his part, Shell tries to view his mother’s decisions in light of the restrictions she faced as a single mom in ill health with no money. Nonetheless he’s still hurt and angry at her willingness to abandon him.

“She didn’t want to deal with a handicapped child,” Shell speculated in our interview. “To bring up a blind child takes a lot of courage.”

In the short time he spent with her he decided that she wasn’t a very nice woman: “She somehow had the idea that she was more special than everyone else. It was her way or the highway. I’m not sure I would have liked her as my mother.”

And the realization that she was Christian challenged his Jewish identity. For close to seventy years he had seen himself as a secular Jew in a non-Jewish community and the step-son of a Gentile woman. At a school for the blind in Brantford he attended church services. After meeting Aida he felt he had to re-affirm his Jewishness.

“So even though I had been circumcised as a baby I had another bris, a pseudo-bris, meaning my penis was pricked by a doctor, and I got into a Mikveh,” he said flatly. “I floated around, the rabbi said a few words, I gave him $250 and I walked out.”

One positive result of making the film, Shell said, was that it reconfirmed his commitment to truth telling, especially in a family. “If you don’t speak the truth it will bite you in the ass at some point,” he said. “I’d rather be straight. If you don’t like it I’m sorry, but I won’t give you bull crap.”

Asked if at any point he felt that the film violated his mother’s privacy — after all, isn’t she entitled to her “secrets”? — he said it treated her very fairly. “And she knew we were making a movie,” he stressed. “She agreed to it.”

On the topic of their other brother — who is not interested in meeting with them — Shell and Szewelwicz say they are disappointed, and hope that at some point he changes his mind.

“I understand it,” Shell said. “He has his own family, his own children and his own history. If we come into his life, that means he has to rewrite his history. That can be very threatening. Izak and I have grown close, but it’s hard to have a brother with whom you have no shared history. Our shared history began four years ago. It’s still a work in progress.”

As for Shaul Schwarz, the movie also impacted his life significantly. He has now left his high-tech gig to become a full-time filmmaker.

“Making the film changed my understanding of family and how important it is to accept it without judgment,” he said. “I’m also more interested in the past than I ever was.”

“I thank God I’ve lived long enough to close the circle,” Shell said. “I met my mother and found a lovely brother and his lovely family, who really seem to like me. Not all was lost in the Holocaust. Our meeting was bashert.”