The Secret Jewish History of Winnie-The-Pooh 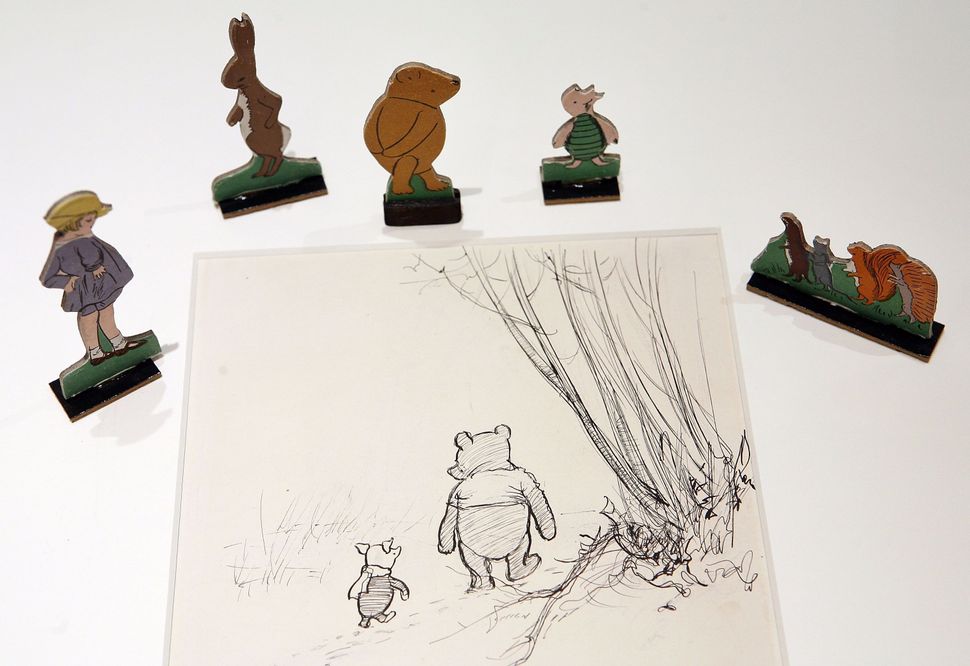 A.A. Milne’s Winnie-the-Pooh stories have delighted youngsters for over 90 years, as have their numerous spinoffs as TV shows, cartoons, holiday specials, movies and, of course, branded merchandise, all of which made Milne very wealthy.

But the story behind the story of how Milne created the complex children’s tale and characters based on his son, Christopher Robin, and his collection of stuffed animals isn’t such a happy one. Which is presumably why it has been deemed perfect fodder for a feature film, “Goodbye, Christopher Robin,” that recounts the miraculous success of Milne’s stories, precisely timed to capture the imagination of a nation brutalized by the horrors of the World War I, as well as the steep emotional price that Milne, his wife, Dorothy “Daphne” de Sélincourt Milne, and their only child, Christopher Robin, paid for that success.

For Milne himself, a serious novelist, playwright and poet, Pooh became a Golem-like monster that would come back to haunt him, overshadowing all his literary pursuits, before and after the publication of “Winnie-the-Pooh” in 1926. For Christopher Robin, he would be subject to teasing and harassment from an early age, with everyone assuming he was just like the fictional character that bore his name, even though he was not. He blamed both his parents for his exploitation, and lived most of his life estranged from them.

In what reads like a passage right out of a Philip Roth novel, Christopher Robin Milne once wrote, “In pessimistic moments, when I was trudging London in search of an employer wanting to make use of such talents as I could offer, it seemed to me, almost, that my father had got to where he was by climbing upon my infant shoulders, that he had filched from me my good name and had left me with nothing but the empty fame of being his son.”

Milne himself came down on the right side of history where the national defense was concerned. After serving on the front in Europe, Milne joined MI7b, a little-known British military intelligence unit consisting in large part of established authors who wrote propaganda about British heroism and German atrocities. When war against the Germans came around a second time, Milne spoke out loudly against his erstwhile friend, the author P.G. Wodehouse, for making pro-German radio broadcasts from Berlin. Wodehouse pointedly replied, however, by accusing Milne of child exploitation. Ouch.

Still, however Milne felt about the bear, and however his son felt about being unable to escape the character’s fictional clutches, Winnie-the-Pooh gained a life far beyond his creator’s control or imagination.

Part of that imagination has extended to finding – or even placing – Jewish themes and messages in the stories of Pooh. Pooh himself, of course, loves honey – that quintessential Jewish food (not for nothing is the Promised Land called “the land of milk and honey”) – to the point that his obsession with it gets him into some sticky messes. Saul Blinkoff, who animated the 2004 full-length cartoon version of Pooh for Disney, went so far as to add a mezuza to Pooh’s doorpost.

It hasn’t been lost on many that Pooh’s sidekick, Eeyore, has a comic, neurotic outlook worthy of Larry David:

“Good morning, Pooh Bear,” said Eeyore gloomily. “If it is a good morning,” he said. “Which I doubt,” said he. “Why, what’s the matter?” “Nothing, Pooh Bear, nothing. We can’t all, and some of us don’t. That’s all there is to it.” “Can’t all what?” said Pooh, rubbing his nose. “Gaiety. Song-and-dance. Here we go round the mulberry bush.”

Fetch this donkey a good therapist!

“Jews should read ‘Winnie-the-Pooh’ just like everyone should. Jews think and need the exact same things other people do. Jews think, ‘I’m hungry, I’m tired, I’m in love, I have a job to go to, my back hurts, and I’m getting older’ — all of that stuff is common to everyone. Ninety-nine percent of who we are is the same. Jews should be interested in these books for the same reasons as everyone else. And there is no conflict; I’m not saying people should eat Piglet!”

Perhaps the final proof of Pooh’s universal message is what may just be the perennial best-selling children’s book in Yiddish since its publication in 2000. Leonard Wolf had little trouble translating the original book into “Vini-der-Pu,” in which Pooh became Pu, Eeyore became Iya, and — your favorite and mine — Piglet became Khazerl.

And you didn’t have to be an expert to translate Pooh’s catchphrase, “Oh, bother,” which verily leaps off the page as “Oy, gevalt,” as if Milne had actually back-translated the phrase into English.

Seth Rogovoy is a contributing editor at the Forward. He often explores the correspondences between popular culture and Jewish themes.

The Secret Jewish History of Winnie-The-Pooh