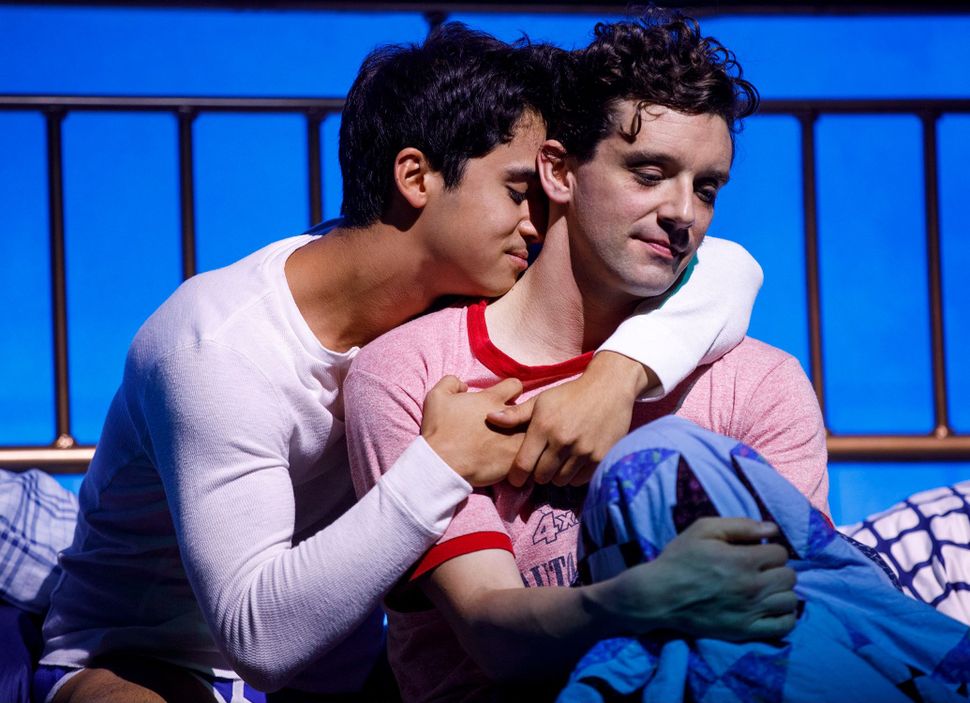 “I have taught myself to sew, cook, fix plumbing, do taxes; I can even pat myself on the back when necessary,” Arnold Beckoff tells his mother. “All so I don’t have to ask anyone for anything. There is nothing I need from anyone except for love and respect. And anyone who can’t give me those two things has no place in my life.” He’s angry with her, and exhausted with being angry with her. “You are my mother,” he goes on. “I love you. I do. But if you can’t respect me then you have no business being here.”

Finally, just before mom decides she’s had enough, Arnold hurls this at her, the demand for love, acceptance, and honesty that animates the entire play. He’s angry, and he’s wounded, and he’s standing his ground. The circumstances for a young gay man are very different today than in the turn-of-the-1980s moment when the play was written and is set — post-Stonewall, pre-AIDS, way pre-Windsor — but in Urie’s skilled hands, and in this slick, taut production, stylishly and sensitively directed by Moisés Kaufman, the moment sears.

It’s also a moment, an I-am-what-I-am insistence (to borrow from another Fierstein script), that’s familiar through much of contemporary gay theater, much of it, like “Torch Song,” with Jewish themes or, at least, written by Jews.

In the first act, the needy, nasal, lonely Arnold meets and falls for a bisexual shaygetz stud, Ed (a hunky Ward Horton), who ultimately leaves him for a woman. In the second act, Arnold, Ed, and that woman, Laurel (Roxanna Hope Radja), navigate their unusual, boy-and-girl-and-boy’s-ex-boyfriend-and-ex-boyfriend’s-new-boyfriend (that last is Alan, played by Michael Rosen) melange, some vague approximation of a family. By the third act, when Arnold’s Ma arrives to critique his life, he has found something close a family: a gay foster son, David (Jack DiFalco), a lost, mourned partner, and perhaps a rekindled relationship with Ed.

If what must have seemed outré then today seems more pat — the curtain falls on Arnold embracing mementos of Ed, Alan, David, and Ma — it remains sweetly moving.

As written by Fierstein, Arnold is steeped in Jewishness, from that whiny accent to the Yiddish with which he peppers his conversations with his mother. He’s an outerborough kid, struggling against an overbearing, nagging-from-Florida mother, and while there’s little specifically Jewish about their relationship, it’s the very fact of Ma’s Jewish-mother-ness that creates the final-act pressure cooker. It’s a clever bit of playwriting jujitsu, really, relying on the stereotype of a Jewish mother to create a reactionary force over which our protagonist to triumph.

But then there is, oddly enough, a strong undercurrent of Jewiness to many — though certainly not all — classics of gay theater. Consider “The Boys in the Band,” which opened in 1968, in which an equally nasal character, Harold, dubs himself an “ugly, pock-marked Jew fairy,” a linkage of Jewish self-hatred and gay self-hatred. (The play is by Mart Crowley, who is not Jewish, and it is not otherwise a Jewish play.) In “Torch Song,” which debuted in three parts, in 1978, 1979, and 1981, the almost Rothian theme is that self-actualization requires the rejection of smothering Jewish mothering.

Larry Kramer’s “The Normal Heart,” from 1984, isn’t explicitly Jewishly influenced, but its main character, Ned Weeks, is essentially Kramer, who is the human embodiment of the principle that inelegant Jewy pushiness is an acceptable and sometimes necessary alternative to goyish propriety. “Falsettos,” by William Finn, produced in 1992 and originated in two parts, in 1981 and 1990, with its onstage hospital-room bar mitzvah and lyric about “watching Jewish boys who cannot play baseball play baseball,” situated gay families as just another exotic quirk in the grand, neurotic mishpocha. And, of course, Tony Kushner’s “Angels in America,” which premiered in 1991 and 1992, is suffused in Yiddishkeit, from the eulogizing rabbi who opens the pay to the fever dreams of Ethel Rosenberg taunting Roy Cohn to nebbishy, guilt-ridden Louis Ironson.

Why this conflation of gay themes and Jewish ones? In part, I imagine, it’s inevitable; theater is an industry in which Jews (and gays) are overrepresented, so inevitably Jewish (and gay) playwrights (Harvey Fierstein, Tony Kushner) will write plays about their own concerns and invested with their own cultural touchstones. But I also wonder if there’s something deeper at play, some parallels about outsiderness and acceptance, about intellectualism and curiosity, about looking at the world a little differently than does the mainstream, about tolerance and acceptance. They’re parallels made explicit in yet another example, “Cabaret,” in which Nazism confront both Jews and homosexuals.

And that, it might be, is the ultimate connective thread. Arnold, a gay man, is demanding his mother’s respect. He is, he admits through the play, more like his mother than he’d care to admit. And his mother, her whole generation of postwar Jews, had to demand respect, too. The apple don’t fall from the tree.

Jesse Oxfeld has written about theater for New York Magazine and Town and Country.