The ‘Last Jewish Writer In Hungary’ Returns To 1945 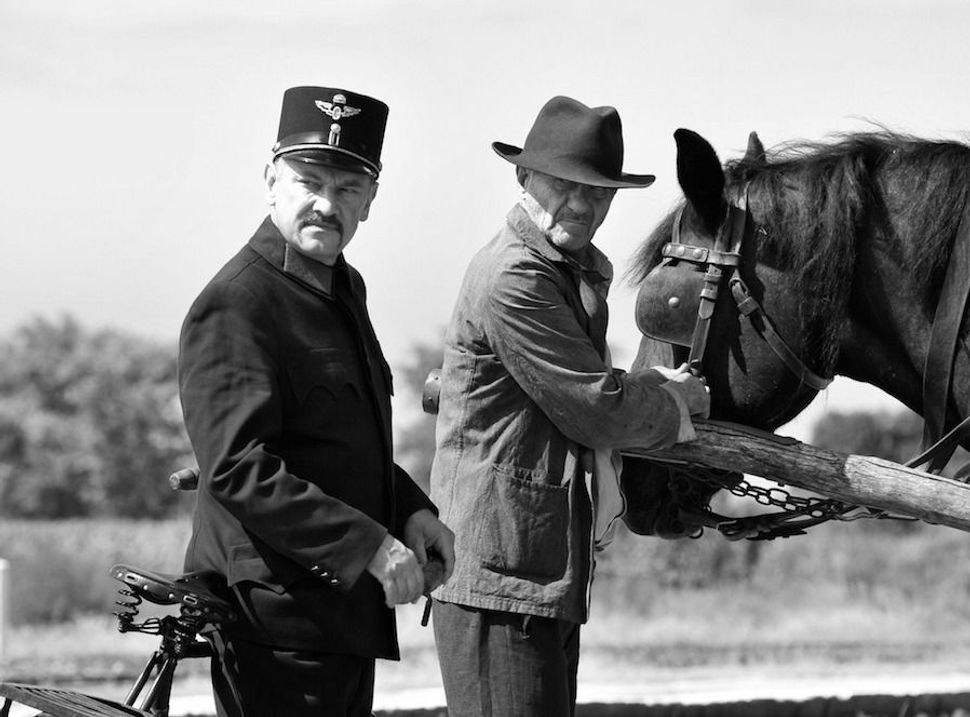 Set in post-Holocaust Hungary, “1945” is a stunning, black and white film which explores the culpability and dread that is aroused among local Christians, many of whom were Nazi collaborators, when two Orthodox Jews arrive in town on an unspoken mission.

The timing for this multi-award winning film couldn’t be more on target, say writer-director Ferenc Török, 46, and co-writer Gábor T. Szántó, 51, whose story, “The Homecoming,” inspired the movie.

The two artists, who met with me at the JCC on the Upper West Side of New York, point out that anti-Semitism has a long tradition in Hungary and is alive and well today; indeed, they say it’s experiencing a resurgence especially among far right youthful legislators. A recent survey showed that 36% of the population has some feelings of anti-Semitism and that 15 people in parliament used anti-Semitism as a tool to get elected. During the Communist period, anti-Semitism was largely suppressed.

“Ironically, it’s in a Democracy that we’re seeing it again,” said Török. “At the same time there’s a new generation — and I’m part of it — that wants to open up the taboos and secrets. I hate taboos and secrets. Still, I’m frequently asked why I as a non-Jew I would be drawn to this material. When I was 18, I visited Israel and thought I had found paradise. Also, my wife has Jewish roots. I don’t believe my family was anti-Semitic or involved in anti-Semitic activities during the war — my grandfathers served on the Russian front — but I felt I had to explore this.”

Hungary’s collaboration with the Nazis and its role in sending more than 400,000 Jews to their deaths — not to mention the theft of Jewish property that took place in its wake — is a source of ongoing debate, he continues. Many believe that the Holocaust has been overstated and that Hungary was also victimized, occupied first by Germany and then Russia. That said, the Holocaust is taught in school and Jewish survivors are brought into the classroom to give their experience a human face. It’s a contradictory culture that’s grappling with its past.

“What happened in Germany in the mid-80s is now happening in Hungary,” said Szántó.

“Yes, but Hungary is very different from other Eastern European countries because 100,000 Jews survived and there continues to be a real Jewish community in Hungary, not unlike France,” said Szántó, a Jew with deep Hungarian roots.

During the Holocaust his family was deported to Austria (both grandfathers died in forced labor camps) and the topic was not shrouded in silence in his home, at least in part because he questioned his family about it. In much of his fiction the Holocaust is a spectral presence even when he’s writing about contemporary Jews. His best known works include “The Informer,” “Kafka’s Cats,” and “Eastern Station, Last Stop.”

The majority of Jews in Hungary are completely assimilated, he says, estimating that perhaps 8,000 are actively involved in Jewish life. After the Holocaust many Jews could no longer believe in God, were loyal to the Communists, and celebrated notions of universality; others denied their traditions as a way to survive he continues.

To this day some older Jewish editors seem uncomfortable with his Jewish-themed stories and novels. He has had far better luck with younger, non-Jewish editors.

“There were of course many Hungarian Jewish writers in the past [e.g., Imre Kertesz], but now I believe I’m the last Jewish writer in Hungary,” he said. “I’m most influenced by American Jewish writers like Singer and Malamud, Roth, and Bellow.”

Perhaps not coincidentally, he’s also the editor-in-chief of the one Jewish periodical in Hungary, Szombat meaning Shabbat. It’s a monthly magazine that publishes 1,000 hard copies supplemented with a daily website. “Besides funding the big challenge is to find serious authors who look at politics and culture from a Jewish perspective,” he said.

“1945” is his first screenplay and it was not without its difficulties, including the need to add more characters who had colorful interactions with each other. Unlike the original story the screenplay represents town-folk more fully as opposed to just the two Jews. “We also had to figure out characters’ back stories. Behind a simple gesture, behind a half sentence there is a hidden story,” he said.

“I wanted to tell a complicated story in a straight-forward, simple way, to make it as focused as possible. I shot it in black and white because of the era of the story, but also because it’s more dramatic,” said Török who acknowledges that “1945” is influenced by the Italian neo-realists (specifically De Sica and Rosellini); Bergman for his psychological insights and sparse dialogue, and especially the structure and mounting suspense of “High Noon.”

“The big challenge for me was to avoid diplomacy,” he said. “I don’t like polite movies. Casting was a challenge. I needed to find actors who could understand the story and bring a new perspective it. For some of the older actors and crew, this material is very personal.”

Török anticipated that the film might have special resonance in Hungary and perhaps other Eastern European countries, but was stunned at the positive response it generated in the Netherlands, Denmark, France, and Belgium. “People in the audience kept saying, ‘this is our story, you’re telling our story.’ The shame of collaborationists existed in countries across the world.” The movie has also been shown to much acclaim in Jewish film festivals, globally.

His next film on the drawing board centers on Alfréd Hajós who in 1896 was the first Olympic swimming champion, the first champion of Hungary, and a Jew.

The ‘Last Jewish Writer In Hungary’ Returns To 1945