‘Three Billboards’ Is A Movie About The Age Of Internet Accusations 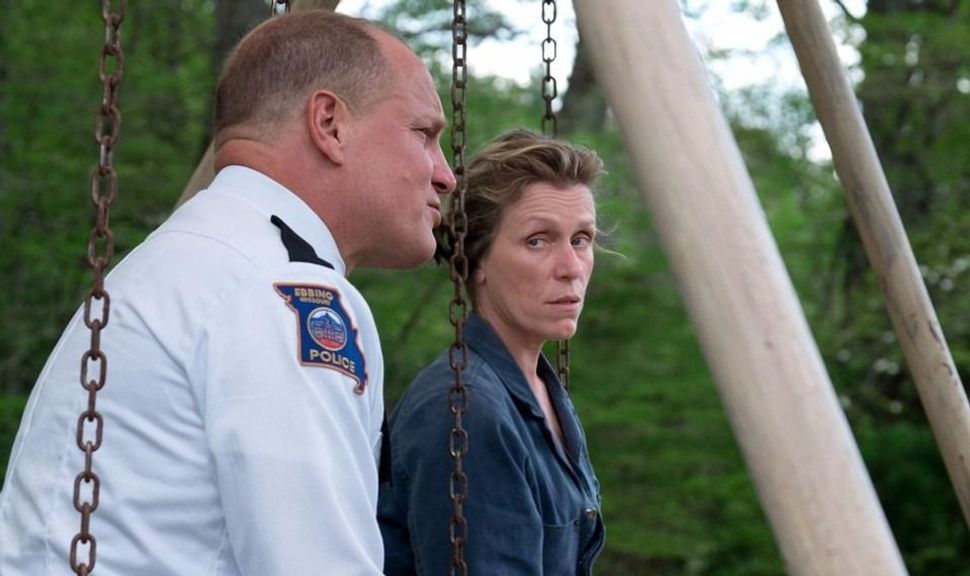 There are three billboards right outside the town of Ebbing, Missouri, that have the power to start a war between the police department and one furious woman. “Still no arrests?” reads the first one, followed by “How come, Chief Willoughby?” and finished off with “Raped while dying.”

Mildred Hayes, played by a scathing Frances McDormand, and rightly gunning for her next Oscar, is a force to be reckoned with here. She is mourning the loss of her daughter Angela, who has been brutally raped, beaten and burned to death (not necessarily in that order.) The perpetrators have yet to be found. It seems to Mildred that “the police department is too busy torturing black folk to solve actual crimes.” If this statement rings uncomfortably familiar, it’s probably supposed to. There’s a whiff here of Arizona sheriff Joe Arpaio, who ignored hundreds of sex crimes committed against children in his thirst to crack down on illegal immigrants. There’s also the way the New Orleans police department allowed rape kits to languish in custody, the Rotherham child abuse scandal, and countless other enraging examples.

Mildred dominates every scene in the movie — wearing a samurai-esque headband, she’s a brooding, angry antihero on a quest for justice. Mildred singles out Chief Willoughby, the head of the police department, because the buck has to stop somewhere. “If it was me,” Mildred tells Willoughby, “I’d start up a database, every male baby was born, stick ‘em on it, and as soon as he done something wrong, cross reference it, make 100% certain it was a correct match, then kill him.” This isn’t just a fight about police incompetence, it is Mildred Hayes versus the patriarchy.

Yet the police have been doing their job, working on a case whose trail has run cold. They’ve cross referenced the DNA, they’ve searched for witnesses, they’ve done the best they could and are very angry that Mildred is upsetting a good family man by the name of Bill Willoughby who happens to be dying.

Martin McDonagh, who also directed the critically acclaimed “In Bruges,” serves us a complicated vision of skewed moral compasses in a world colored with shades of gray. Justice is meted out in unexpected doses with hefty sprinklings of human error and blind rage.

Three Billboards is going to win Best Picture at the Oscars and it deserves to. It speaks to the cultural zeitgeist — we live in an age of Internet condemnation, where the latent anger coiled up in a single tweet has the power to make or break people’s lives. Mildred Hayes posters her feelings on the inadequacy of the police department on three, $5,000 dollar a month billboards, but were Mildred Hayes a different person, her feelings could be just as easily expressed as a tweet and no one would take it any more or less seriously.

The billboards have their desired effect. They get the case back into the public eye, they roil the town and they cause an onslaught of rage, betrayal and dismay at disobeying the intra-community norms. The Internet is a small town, made so by its accessibility to anyone with an Internet connection. Accusations loom as high as billboards do. Is Mildred correct in pinning her grief over her daughter’s macabre death on Officer Willoughby? Could he have done more?

The movie makes interesting arguments against easy moral characterizations. Dixon, a “person of color torturing” police officer with anger issues, and the closest thing this film has to a villain, is partially redeemed in the finale with his commitment to the case. Is he worthy of this redemption? Did Willoughby deserve Mildred’s fourteen-foot tall scrutiny? Do Internet polemics help or hurt the people they involve? Does dragging something into the public eye give justice more of a chance to be served or are we feeding the mob mentality of the Internet, where opinions snowball until they tend to smother? What is a public accusation actually worth?

The movie ends with Mildred driving off with Dixon, uncertain of (no spoilers!) their next move and content to figure it out on the way. The billboards set in motion a sordid chain of events, with its viewers paying a hefty price of arson, violence, blood, sweat and tears. Yet by the end of it chaotic good (in the form of Mildred) and chaotic evil (the well intentioned Dixon) have combined forces to enact some form of twisted justice. For Mildred Hayes, the billboards just may have been worth it. For the Internet, it remains to be seen.

“Three Billboards Outside of Ebbing, Missouri” is now playing in select theaters.

Shira Feder is a writer for the Forward. You can reach her at feder@forward.com.

‘Three Billboards’ Is A Movie About The Age Of Internet Accusations