The Inspiring True Story Behind The Must-Watch RBG Biopic 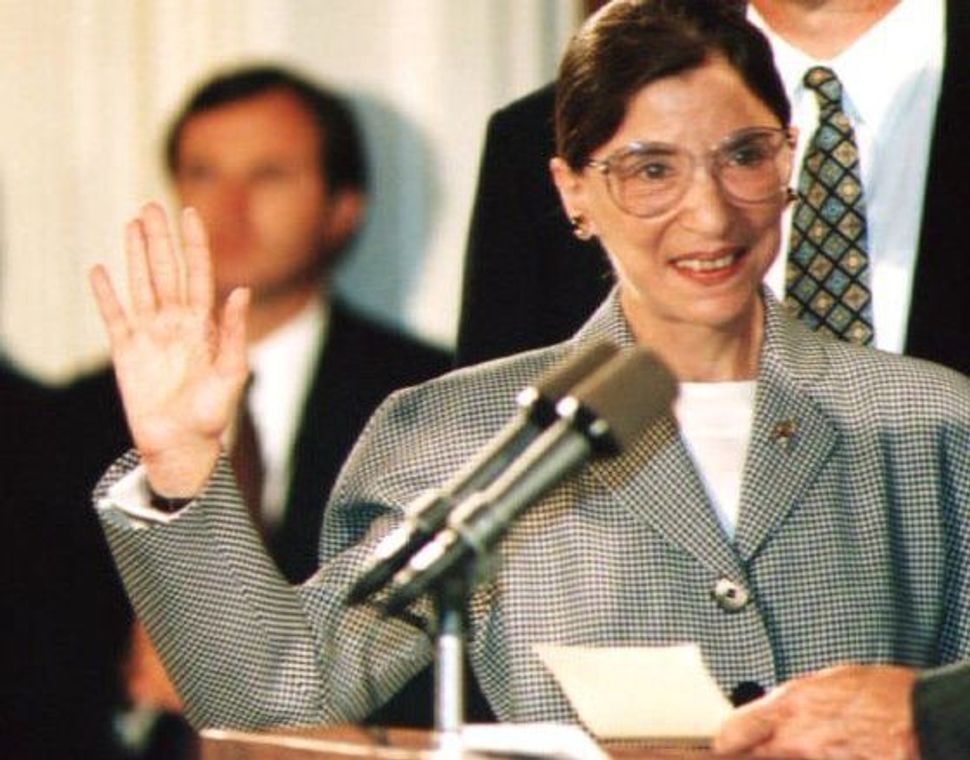 It’s difficult to think of a more compelling title for a Ruth Bader Ginsburg biopic than that of one forthcoming in 2018: “On the Basis of Sex.”

Yet that phrase, which evokes the still-relevant endeavor to ensure that women will not be treated differently than men because of their gender, was not originated by the pioneering jurist. Rather, she quoted it in her majority opinion in the 1996 case “United States v. Virginia et al.”

Regardless of whether or not the words were Ginsburg’s own, her use of them marked a resonant moment in the fight against gender discrimination in the United States. That moment will be central to the narrative of “On the Basis of Sex,” currently in post-production, which stars Felicity Jones as Ruth Bader Ginsburg and Armie Hammer as her husband, Marty Ginsburg.

(The drafting of a Supreme Court opinion has hardly been viewed, historically, as the making of cinematic magic. Recent films concerning the country’s highest legal body involve the assassination or kidnapping of its justices — see “The Pelican Brief” (1993) and “Half Past Dead” (2002) — or, in the case of “Idiocracy” (2006) their penchant for sentencing defendants based on their, quote, “effeminate voices.”)

“United States v. Virginia” marked the conclusion of a years-long effort by women to gain admission to the prestigious Virginia Military Institute (VMI), which had admitted only men since its founding in 1839. The case began in 1990, when the Department of Justice filed suit against both the state of Virginia and VMI on the grounds that the school’s refusal to admit women ran afoul of the Fourteenth Amendment’s Equal Protection Clause.

In 1997 the Supreme Court, in a decision penned by Ginsburg, determined that VMI would be required to admit women.

Having laid out the history of the case — Virginia’s defense of the single-sex school, its court-ordered attempt to create an equitable all-women undergraduate military program, and the failures of that attempt — Ginsburg coolly proceeded to articulate some essential principles regarding modern legal and cultural understandings of gender.

“‘Inherent differences’ between men and women, we have come to appreciate, remain cause for celebration, but not for denigration of the members of either sex or for artificial constraints on an individual’s opportunity,” she wrote. Those differences could be cited as reason to redress previous economic or professional restraints placed upon women, but not — “as they once were” — “to create or perpetuate the legal, social, and economic inferiority of women.”

Virginia, she reflected, had previously been the site of extended and contentious battles over women’s access to higher education. The University of Virginia itself refused to admit women as equals alongside men until 1972; in 1970, a district court reviewing that university’s single-sex admissions declared it “may not now deny to women, on the basis of sex, educational opportunities at the Charlottesville campus.”

Of the members of the Supreme Court, Justice Clarence Thomas, whose son was then enrolled at VMI, abstained from Ginsburg’s decision, and Justice Antonin Scalia dissented.

“United States v. Virginia” has historically been viewed as one of Ginsburg’s most significant opinions. It eliminated the last public single-sex university in the country, marked an important step in the continuing development of a clear and equitable federal position regarding the gender integration of the armed forces, and marked one of the peaks of Ginsburg’s work as an advocate for women.

In 2017, Ginsburg made her first visit to VMI. Speaking to a group of cadets, according to CNN’s Ariane de Vogue, she said “There are women who are ready and willing and able to undergo the tough training at VMI and they want that opportunity.” Several of VMI’s female cadets, who at that time numbered 194 out of 1,700, thanked Ginsburg specifically for her opinion in “United States v. Virginia;” as CNN reported, one graduate, Laura Tyler Chambers, gave Ginsburg her own combat ring in gratitude.

Despite strong institutional pushback, it didn’t take 20 years for VMI to adjust to the change. As The Washington Post’s Peter Finn wryly observed, watching VMI’s first cohort of women complete a punishing annual freshmen rite of passage in March of 1998, “VMI has survived women, and 23 women have survived VMI.”

The Inspiring True Story Behind The Must-Watch RBG Biopic