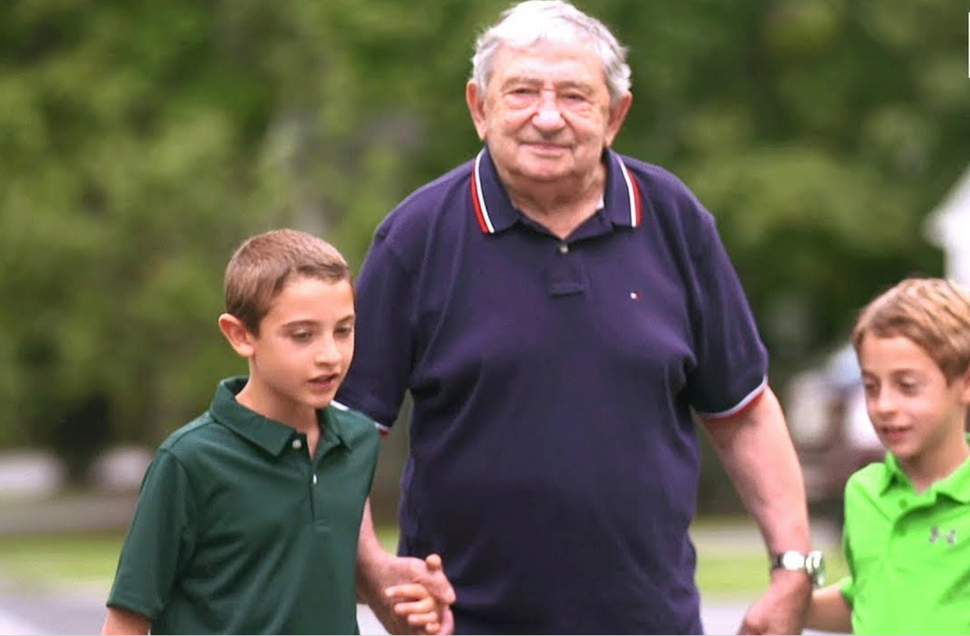 The Number on Great-Grandpa’s Arm Image by HBO

Elliott Saiontz’s bedroom is crammed with collections. His walls are covered with stickers of football teams and players. There are also dozens of karate trophies, pottery projects and framed autographs of athletes, political figures, even the members of his favorite band, Train. There are a lot of autographs too. But in a corner of the room, you will find the most important autograph of all. In loopy, black script, “Jack Feldman” appears against the pale background of a large movie poster.

Wait, you’ve never heard of him?

Jack Feldman is Elliott’s great-grandfather, or, rather, “Great Poppy.” In the HBO short documentary “The Number on My Great-Grandfather’s Arm,” Jack’s life story as a Holocaust survivor is told through intimate conversations with Elliott, the oldest of his six great-grandchildren. HBO’s doc queen Sheila Nevins had discovered the children’s picture book “The Number on My Grandpa’s Arm” by David A. Adler, and used it to create a film that would introduce the Holocaust to a young audience in a gentle, appropriate way.

In Jack and Elliott, Nevins found the perfect storytelling duo. Elliott is a bright, endlessly inquisitive kid whose interests range from electric bass guitar to fantasy novels to Egyptian history or Native American history or Asian history (really, any kind of history). The questions he asks Jack, who was 89 at the time the project began, are both probing and sincere. And Jack candidly recounts exactly what happened when the Nazis took control of his village in Poland.

According to Elliott, “I know it can be upsetting, but I like to ask questions. And sometimes when I ask them again, he gives me new answers with more details. I just really like knowing things.”

But the most penetrating parts of the film aren’t even conveyed with words. Producer/director Amy Schatz has worked with artist Jeff Scher to create animation with a painterly effect that is realistic, but appropriate for young viewers.

“I’ve made several films for children about challenging issues like 9/11, climate change, divorce, and I always start by talking with the kids themselves,” Schatz says. “From the beginning, it was very clear that Elliott has not just a deep knowledge of history, but a deep love for his great-grandfather. Our conversation made me realize that Elliott should be the filter for Jack’s terrible story.”

The differences in age and experience between the two melt away as Elliott snuggles up to his Great Poppy, laughs at his jokes and softly strokes his hand as their dialogue turns toward painful moments.

Jack had lived a comfortable and joyful life as the child of a successful cap maker in Sosnowiec, Poland, very near to the German border. At the age of 14, after the Jews had already been separated from their homes and possessions and placed in a stark, unlivable ghetto, Jack (then called Izak) was dragged off and sent to the first of many concentration camps, including Auschwitz. He never saw his family again. Miraculously, he survived, but was then forced on a six-month death march. Again, he defied the odds, made his way to a German displaced persons camp and eventually to Rochester, New York, where he raised his family.

Jack’s granddaughter, Stacey (Feldman) Saiontz, who is also Elliott’s mom, has made researching the family’s history her life’s work. On her fortieth birthday a few years ago, the former attorney took a ten-day trip to Poland to retrace Jack’s steps.

This level of devotion for Jack Feldman exists outside his blood relatives as well. Jack was a fixture in his synagogue and neighborhood for decades. Back in July 1964, race riots broke out in Rochester that left a few people dead, several hundred injured and the nearby businesses destroyed. Except for one. Jack Feldman’s African-American employees stood arm-in-arm in front of his fish market, preventing any damage. Revered for his generosity, Jack was known to provide free food to anyone in the community who was hungry. He knew what it was like to be hungry.

Today, Jack is retired, and the fish market is run by his son Irving. And Elliott is celebrating his star billing in a highly-acclaimed movie, currently streaming for free on HBO.com, and looking ahead to his bar mitzvah this coming fall. Of course, there also will be visits with Great Poppy.

Amy Schatz says, “Elliott wants to absorb as much of Jack as he can to carry into the future. This is not only a story of loss and devastation; it’s really also a love story.”

Amy Oringel is a freelance writer based in Bedford, N.Y.