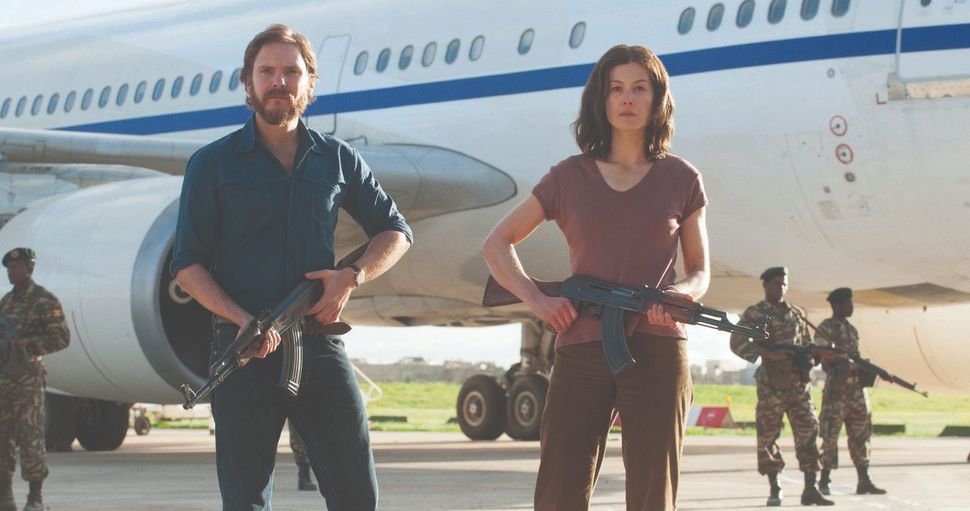 They started to make movies about the 1976 Israeli special forces raid on Uganda’s Entebbe airport even before the bodies were cold.

One movie aired before the end of that year. Two more came in 1977. Chuck Norris’s gloss on the story came in 1986, complete with a motorcycle-borne rocket launcher.

The battle at Entebbe, when Israeli forces killed a crew of hijackers and a few dozen Ugandan soldiers and freed nearly 100 Jewish hostages, was made for TV.

Told and retold, it was a story about the Jewish state projecting deadly Jewish power to save Jewish lives. This month, with the varnish on deadly Jewish power a good four decades thinner, there’s a new Hollywood retelling of the events of July 4, 1976.

This time, it’s a story about how Western leftists should really butt out of the Jews’ business.

The Western leftist in question in Brazilian director José Padilha’s “7 Days in Entebbe” is Wilfried Böse (Daniel Brül), the Baader-Meinhof Gang associate who joined with the militants of the Popular Front for the Liberation of Palestine (External Operations) to commandeer the Air France Flight 139 out of Tel Aviv.

“Germans killing Jews,” says one of Böse’s comrades, sitting in a tent at a PFLP training camp in Libya as they prepare for the hijacking. “Have you thought about that?”

Böse does think about it, and it makes him feel kind of bad, and then (spoiler alert, I guess?) he dies.

In this version, the hijacking has been retooled for the anti-BDS moment, when American and Israeli Jewry spend millions of dollars telling college students not to worry too much about the Israeli occupation. It’s enough to make you just a little bit nostalgic for Norris, if only for the rocket launchers.

The film returns us to the historical moment when skyjackings were almost mundane, and Western leftists were some of the biggest players in the global terror game. At the height of the skyjacking wave, two Germans and two Palestinians joined up to steal a plane full of more than 200 people, fly it to Uganda and hold the Jewish passengers hostage. Rather than succumb to the hijackers’ demands to free Palestinian prisoners, the Israelis sent a squad of soldiers on a nighttime raid, landing four huge cargo planes at the Ugandan airport unnoticed, then killed all the hijackers and scores of Ugandan soldiers before rescuing nearly all the hostages. The only Israeli soldier killed in the raid was Yonatan Netanyahu, the elder brother of the current Israeli prime minister.

It was irresistibly dramatic. ABC put every famous 1970s actor it could get its hands on in its December 1976 TV movie “Victory at Entebbe,” in which Kirk Douglas shouts: “Negotiate, Rabin! Negotiate!” while banging on a table, hair flopping. Peter Finch was Rabin in the 1977 “Raid on Entebbe,” another TV movie; an Israeli film the same year, “Operation Thunderbolt,” mixed in actual historical footage. Then came Norris’s 1986 “The Delta Force,” in which Norris himself, a member of an American commando team, inexplicably busts in and saves the hostages. He kills a guy in a kaffiyeh, telling him, “Sleep tight, sucker.”

There are something like four Palestinians in the film. Only two seem to have names. One, PFLP-EO leader Wadie Haddad, says that the other’s whole family was killed by the Israelis. (I would tell you the actors’ names, but as of this writing they don’t even appear on the movie’s IMDB page, which tells you something.) But we don’t hear about it from the bereaved man himself, and we certainly don’t see it. These guys apparently don’t deserve backstories.

It’s not that the movie thinks they’re monsters, or even that their cause is unjust. It just doesn’t find them particularly interesting. Their radicalism is a given. They’re Palestinians, they’re desper- ate, and so they do desperate things. That’s all.

The Israelis, meanwhile, are ossified clichés. In the meetings of the Israeli leadership, the really famous guys refer to each other by first names (“Ehud!” “Shimon!” “Yoni!” ”Yitzhak!”), presumably so that husbands in the audience can elbow their wives and be like “That’s Rabin!” and wives can roll their eyes and be like, “Duh.”

The first line spoken by an Israeli in the film (aside from a little girl telling her mother she needs to pee) comes from Rabin (played here by Lior Ashkenazi, whose healthy hairline has him looking much more like Benjamin Netanyahu). He tells Shimon Peres (Eddie Marsan) that he doesn’t want to raise the defense budget. Peres disagrees, setting up a tired argument that drags on throughout the film. “This is about the survival of Israel,” Peres recites. Rabin says something about Israel’s soul. Peres is for strength. Rabin is for peace. It’s a fight that’s been pretty definitively settled in strength’s favor since Rabin’s assassination in 1995 or so. Why anyone thought this would be a provocative argument to watch in a movie theater in 2018 is difficult to imagine.

Still, it’s the Germans who are the stars of this film. There are two: Böse and Brigitte Kuhlmann, another Baader-Meinhof associate, played here by Rosamund Pike. Böse is a publisher of “radical texts.” Kuhlmann is a pill-popping extremist who, for reasons that are not explained, feels responsible for the death that May of Ulrike Meinhof. In flashbacks, we see another member of their cadre (possibly Carlos the Jackal?) drop out as they prepare for the hijacking.

Once the guns come out, Kuhlmann turns out to be a natural at screaming and bullying and waving her weapons around. When she loses her pills, however, she loses her edge, then her mind, and Böse is left to complete the movie’s moral arc.

Böse is the idealist of the German duo. “I only fear a life without meaning,” he says at one point. He struggles to prove his commitment to his Palestinian comrades, especially as he blanches at their rough treatment of the Jewish prisoners. The Palestinians hate him more than they hate the Israelis. “They did what was done to them to us,” one says to Böse. “You are here because you hate your country.”

By the end of the hostage crisis, Böse, too, regrets being there. In the end, despite his good intentions, it wasn’t his business. These Jews and Palestinians would be tearing each other to pieces either way. Let them fight it out. He’s just making things worse.

At a time when the brunt of Israel’s propaganda efforts are focused on keeping the boycott, divestment and sanctions movement from spreading across North American campuses, the film’s message couldn’t have better fit the Israeli government’s agenda if the government had written it itself.