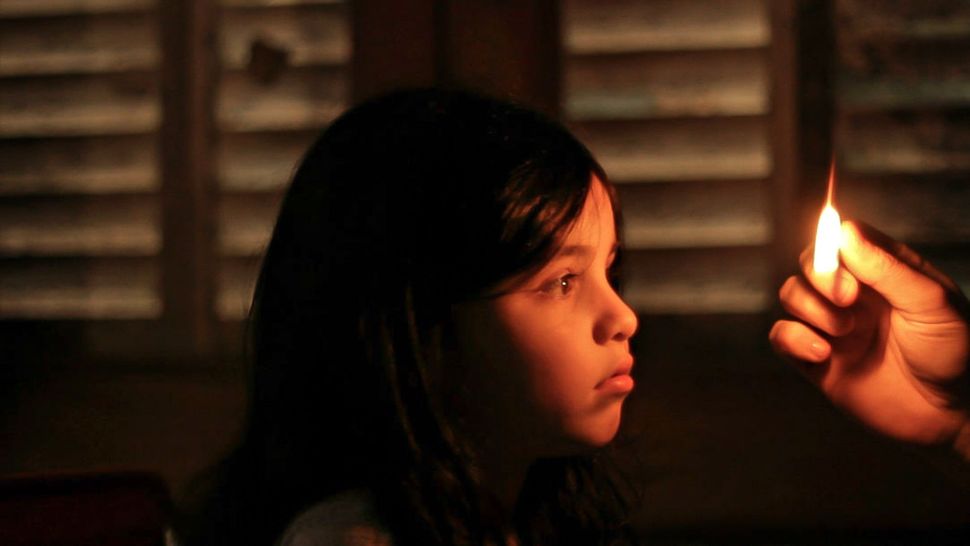 The opening of Alejo Moguillansky’s new film, “The Little Match Girl,” does the audience the unusual courtesy of setting forth a catalog of the attractions to come. “There is an orchestra playing some insane music. There is a donkey. There is a little girl named Cleo,” a narrator intones. “There are a lot of pianos. There is a German guerilla from the ‘70s. There are other characters walking around like sleepwalkers, and who make the story unfold…”

It’s a lot of ground to cover, but the film gracefully brings these elements into harmony over the course of its breezy 71-minute running time. The film’s protagonists, Marie (María Villar) and Walter (Walter Jakob) are a couple trying to support their small daughter on what meager income they can put together as artists. She gets a job assisting renowned pianist Margarita Fernandez (playing herself), while he finds himself at Buenos Aires’ foremost opera house, the Teatro Colón, directing a rare performance of a contemporary opera, an adaptation of Hans Christian Andersen’s “The Little Match Girl,” by the politically and aesthetically radical German composer Helmut Lachenmann, who also gamely appears in the film.

In the film, which has its New York premiere on Friday, March 2, at the Film Society of Lincoln Center, Moguillansky incorporates the real-life rehearsals of the opera into a his film, drawing productively on the ambiguity between reality and fiction, a method that he previously used in his 2013 film, “The Parrot and the Swan,” which documented the workings of a dance company. During the opera’s actual rehearsals, the city of Buenos Aires found itself in the midst of a transit strike, which in turn led the orchestra to stop work.

“That was an image for me, the German Marxist composer facing a Latin American orchestra on strike,” Moguillansky told me shortly after arriving in New York for the US premiere of “The Little Match Girl,” which won the prize for best Argentine film at last year’s Buenos Aires International Festival of Independent Film (BAFICI). “The film started from this point of contradiction.”

Though still largely unfamiliar to American audiences, Argentina has become a fertile ground for contemporary cinema, giving the world internationally renowned filmmakers like Lucrecia Martel and Martín Rejtman as well as a tightly knit younger generation including Moguillansky, Mariano Llinás, and New York-based expat Matías Pineiro. Like many in the Buenos Aires film scene, Moguillansky hails from the city’s sizeable Jewish community. His family came to Argentina in the 1930s, arriving from that swath of Eastern Europe that was then a part of Poland, but now belongs to Ukraine.

The film ably documents Buenos Aires’ creative energy, and if nothing else it certainly feels like an authentic representation of how it feels to be young and bohemian there right now. “I think of the city as a place for the circulation of characters,” he said. “In my way of thinking, the city is a producer of fiction.”

Stories of arty youths doing battle with urban life have become a maligned staple of indie filmmaking, but the film’s erudition and good humor make for an experience far distinct from the dyspeptic myopia that characterizes so many of its American counterparts. In short, it’s a movie about young people struggling to find their place in the world that carves out due space for, well, the world.

Everyone appears to be on the move, invested in the creation of something. “In this particular film,” Moguillansky said, “everyone is an artist. I see it as an anthropological portrait of an artist in Buenos Aires, the ways that they relate to money, the ways they relate to authority. They all belong to the same submundo.” At the same time, the film’s loose energy remains firmly grounded in real world concerns that one imagines weigh heavily on the people involved, from the actors and the musicians that we see to the filmmakers that we don’t. In one example of the narrative intermingling with actuality, Marie and Walter’s child Cleo is portrayed by young Cleo Moguillansky, the director’s daughter.

The inhabitants of the Buenos Aires demimonde are joined in spirit by some of the canonical figures of Western culture. Alongside the work of modern day radicals Lachenmann and Fernandez, Moguillansky includes that of Beethoven, Mozart, Schubert, and, of course, Hans Christian Andersen. Parenting like a truly hardcore cinephile, Marie occupies her daughter by plopping her down in front of a VHS copy of Robert Bresson’s classic morality tale, “Au Hasard Balthazar.”

Mouillansky says that this intertextuality isn’t the result of some broader intellectual schema, but rather arose organically from the film’s production. “The reason why Beethoven, Mozart, Schubert are there is to be a kind of aesthetic landscape. The film thinks of them as friends. It’s something the film likes,” he said. “In a way, Beethoven, Mozart, and Schubert are actors in the film.”

For example, the references to Bresson’s film were inspired by a class that Fernandez gave in Buenos Aires, analyzing its use of the Andantino from Schubert’s Piano Sonata No. 20. At the same time, Bresson’s exploration of suffering in “Balthazar” makes it a kindred spirit to Andersen’s tale of the little match girl, who freezes to death amidst the apathy of passersby.

Andersen’s story serves as weighty leitmotif, to which Moguillansky returns to raise questions about art’s purpose. Can art do anything to combat that kind of suffering? And what are the consequences if it cannot?

At one point, the film cites perhaps the most pungently severe response to this question, Lenin’s expression of his own profound confusion before Beethoven’s “Appasionata”: “I know of nothing better than the ‘Appassionata’ and could listen to it every day. What astonishing, superhuman music! It always makes me proud, perhaps with a childish naiveté, to think that people can work such miracles! But I can’t listen to such music very often, it affects my nerves. I want to say sweet, silly things, and pat the heads of people who, living in a filthy hell, can create such beauty. These days, you can’t pat anyone on the head, they might bite your hand off. Hence, you have to beat people’s little heads, beat them mercilessly.”

For its part, Moguillansky’s film takes a gentler and more nuanced approach towards the issue. Still, he exploits the irony that arises between the radical artist’s ideals and their exalted place in bourgeois society. Lachenmann and Walter are frustrated by the striking orchestra, while a simmering conflict between Fernandez and Marie about payment becomes a sort of gag – whenever her assistant asks for a raise, the pianist changes the topic to Schubert. Yet the lines of conflict are never overly clear or severe, and by the film’s conclusion the main characters find themselves enjoying each others’ company as well as the music of Helmut Lachenmann’s somewhat unpredictable favorite composer: Ennio Morricone.

So what is the proper role of art in 21st century life? For better or worse, the question remains unresolved. “It’s the same problem that the film has,” Mogiullansky said. “I would like to think that the film should think like a child does, and not like an alienated intellectual who wants to make a sophisticated object. Because that’s the necessity, the film has to say in a very clear way: this is my problem, but it’s a problem that exists before the film exists. Perhaps that’s one of the secrets of the film, it’s extremely sincere.”