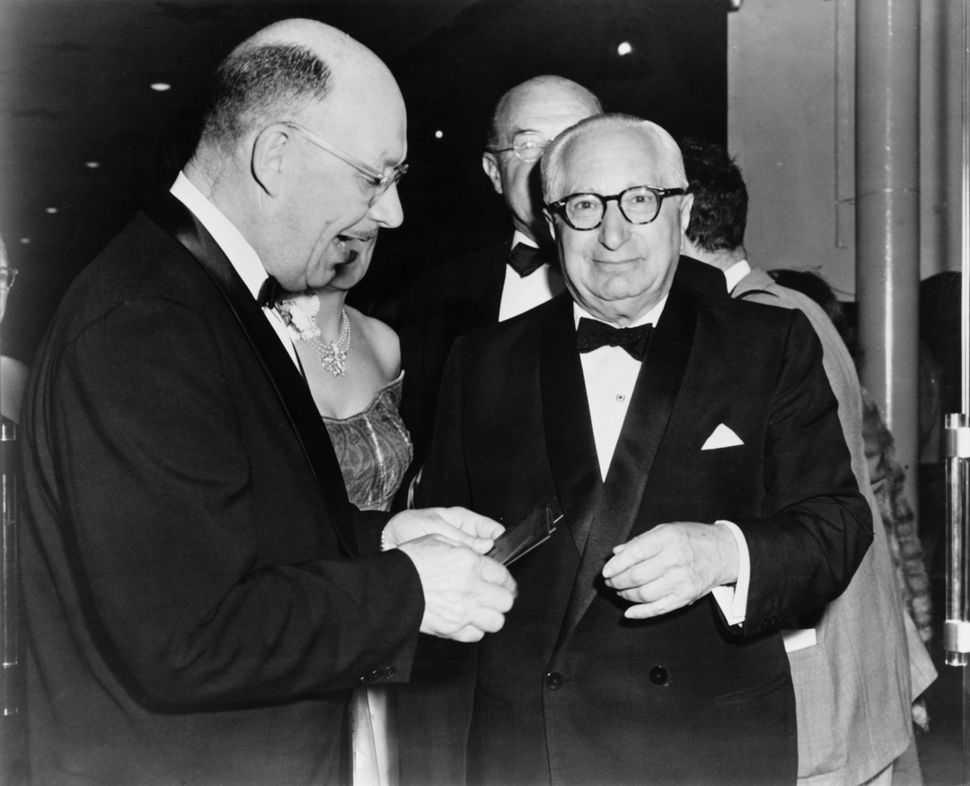 Louis B. Mayer attends a film premiere in 1954. Image by Getty

The Academy Awards have long served as a platform for activists to voice their discontent to an audience of millions — even if the Academy’s board hasn’t always felt positively about such stunts. Ironically, however, according to a March 1 Hyperallergic article by Rooney Elmi, the awards have nefarious origins: They were apparently created by Hollywood’s creative class to combat unionization.

During the 1920s, Louis B. Mayer (as in Metro-Goldwyn-Mayer) was the most influential man in Hollywood. Like any respectable film studio owner, he wanted a private Santa Monica beach house. To keep construction costs low, Mayer hired MGM craftsmen — only to discover that, due to the studio construction union’s new labor agreements, costs would be higher than expected.

Mayer eventually found loopholes to keep his costs downs, but, as Rooney Elmi writes, came away fearing that “a powerful labor movement in Tinseltown would cause a domino effect and lead actors, directors, and others to also form unions.” So, wary of such unionization efforts, he crafted a plan to stop his laborers from fighting for fair pay and benefits: First, form an organization that would distract creative workers from starting their own union. Then, have them duke it out for awards that would distract them from the real award at stake – more negotiating power vis a vis the studio system.

In January 1927, 36 directors, actors, writers, producers, and technicians attended an invitation-only banquet at a Los Angeles hotel for “an emerging organization titled the Academy of Motion Picture Arts and Sciences (AMPAS),” Elni continues. At the party, Mayer told those gathered that if they signed on as members of the Academy, they’d get better working conditions and the prestige of being associated with an elite organization.

Ostensibly, the organization served to recognize creative talent. Yet, in reality, as Louis Perry writes in “A History of the Los Angeles Labor Movement,” the invitation-only nature of the Academy “kept control … in the hands of the few, so that it took on aspects of a company union.” By creating a trade organization that represented writers, directors, and other creative workers, Mayer and his powerful friends forestalled them from following in the footsteps of Hollywood’s construction workers and unionizing.

Mayer’s plan had an even more fiendish element to it: The awards-giving body of the newly-formed academy would serve to distract creatives from attacking their bosses by forcing them to compete more ruthlessly with one another. In Mayer’s own words, quoted in the Hyperallergic piece: “I found that the best way to handle [moviemakers] was to hang medals all over them. If I got them cups and awards, they’d kill themselves to produce what I wanted. That’s why the Academy Award was created.”

That’s right: the Oscars were created as a diabolical conspiracy to enslave the working class. Have fun at your watch party!

Sam Bromer is the Forward’s culture intern. Contact him at [email protected]com