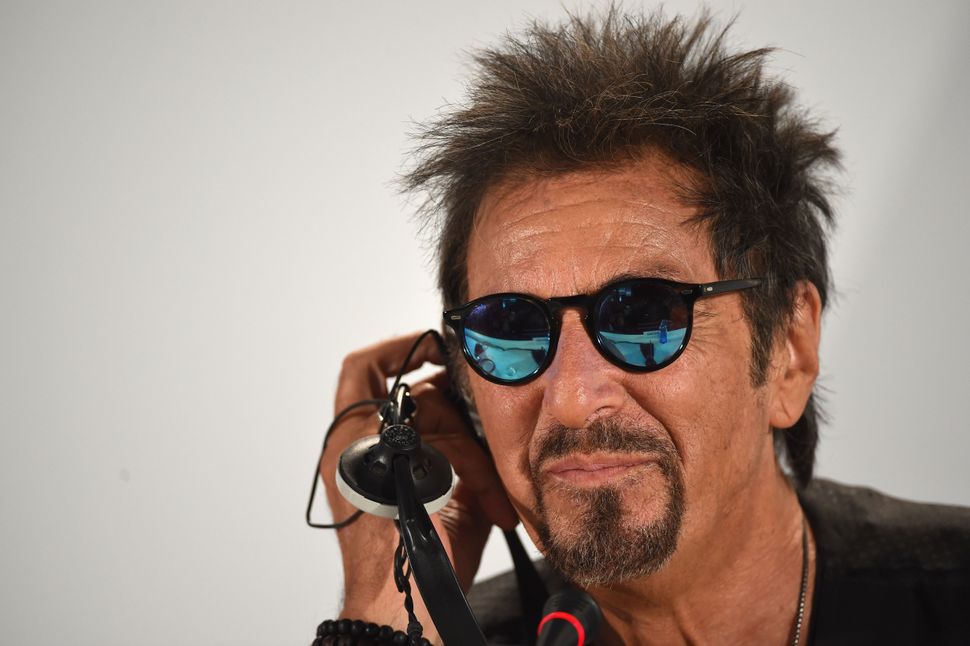 While best known for portraying characters of Italian and Latino descent – think Michael Corleone of “The Godfather” films, Carlito Brigante of “Carlito’s Way,” and Tony Montana of “Scarface,” Pacino has an arm’s-length resumé of portraying Jews in film and onstage.

Most famous perhaps are Pacino’s much-discussed, multiple portrayals of Shylock, the Jewish moneylender from William Shakespeare’s “Merchant of Venice,” whom Pacino has portrayed with overwhelming sympathy both onstage and on the silver screen.

Pacino – who discusses his career in an interview with film critic David Edelstein in Vulture, in advance of “Pacino’s Way,” an all-Al film retrospective curated by Pacino himself at the Quad Cinema in his old neighborhood of Manhattan’s Greenwich Village (March 14-30) – has impersonated real-life Jewish figures including journalist and TV new producer Lowell Bergman (“The Insider”), mob lawyer and Donald Trump mentor Roy Cohn (in HBO’s minseries version of Tony Kushner’s “Angels in America”), and Phil Spector in the eponymous HBO biopic of the wig-wearing, gun-toting rock ‘n’ roll hitmaker.

Born in Manhattan to Sicilian-American parents (his maternal grandparents, coincidentally, hailed from a small town named Corleone) and raised by a single mother in the Bronx, Pacino escaped the poverty of his childhood first by attending Manhattan’s High School of Performing Arts and then by falling in with the Greenwich Village scene, where he studied the Stanislavski Method of acting and its offshoots under the tutelage of such Jewish-American theater greats as Lee Strasberg, Julian Beck, and Judith Malina. (Edelstein describes this period as “the space where Pacino is happiest: the experimental theatrical milieu in which, 50 years ago, he found his voice.”) Pacino worked odd jobs at the time to support himself, including a stint as an office assistant at the American Jewish Committee’s magazine, Commentary, where he interacted with editor Norman Podhoretz and essayist Susan Sontag, among others.

Early on, Pacino became a favorite of Village playwright Israel Horovitz, who cast him in the Obie Award-winning play, “The Indian Wants the Bronx,” alongside John Cazale. (The two would reunite often in film, playing brothers in “The Godfather” films and bank robbers in “Dog Day Afternoon.” Curiously, in both movies, Pacino’s character winds up responsible for the murder of Cazale’s.) Pacino won an Obie Award for his role in “Indian,” and was discovered and signed by manager Martin Bregman, who went on to produce many of Pacino’s films, including “Scarface,” “Sea of Love,” “Serpico,” “Dog Day Afternoon,” and “Carlito’s Way.” Pacino would work again with Horovitz in the 1982 film, “Author! Author!,” portraying an Armenian-American playwright named Ivan Trevalian, whom Horovitz obviously based upon himself.

Pacino has also enjoyed a long and fruitful collaboration with Jewish-American playwright David Mamet, playing the role of Teach in “American Buffalo” and starring in the 1992 film version of Mamet’s Pulitzer Prize-winning play, “Glengarry Glen Ross” (reportedly referred to by the cast lovingly as “Death of a Fucking Salesman”). Pacino appeared in the 2012 Broadway revival of “Glengarry,” and again in Mamet’s “China Doll” on Broadway a few years hence.

Pacino’s other Jewish film roles have included the fictional celebrity publicist Eli Wurman in the 2002 crime drama “People I Know,” written by Jon Robin Baitz; Simon Axler in “The Humbling,” based on Philip Roth’s novel by the same name; and a very delirious Satan in “The Devil’s Advocate,” based upon a character who first appeared in various books of Jewish scripture, including Numbers, Chronicles, Job, and Zechariah.

In 2015, Pacino was slated to appear in a stage adaptation of Norwegian writer Knut Hamsun’s novel, “Hunger,” in Copenhagen. Upon learning that Hamsun supported the Nazi occupation of Norway during World War II and was a confidante of high-ranking Nazi officials, including propaganda chief Joseph Goebbels, Pacino withdrew from the production.