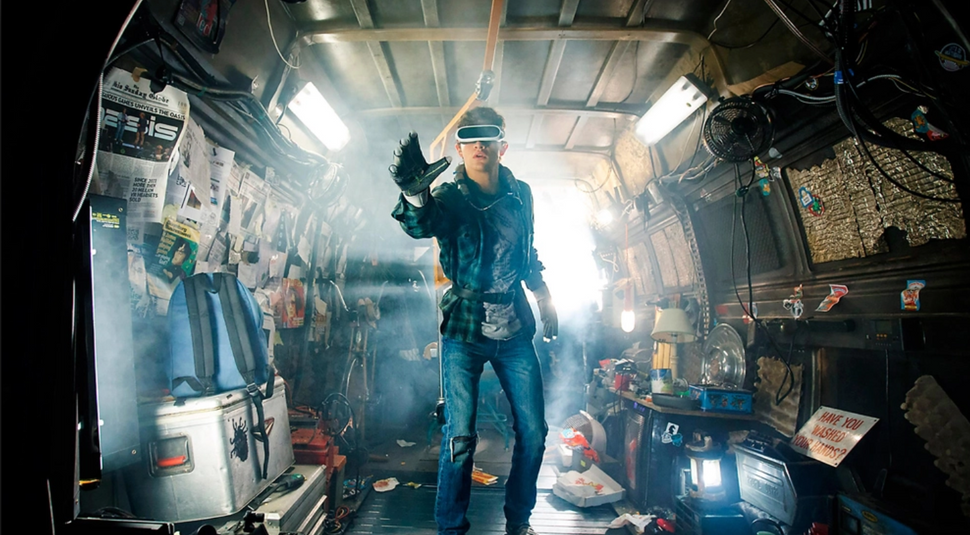 Image by Ready Player One

Steven Spielberg has said that he got into filmmaking mainly to defuse anti-semitism; to earn the respect and admiration that he couldn’t get as an isolated child. His quintessential success, “E.T.” (1982), is the story of his own childhood reconstructed, where the sensitive and cerebral daydreamer is vindicated by an otherworldly power. Anyone who says that they are nostalgic for the 80s is actually saying, to some extent, that they are nostalgic for Spielberg’s early films.

“Raiders Of The Lost Ark” came out the year before “E.T.”; aside from being a fun action movie, it’s a masterpiece of structuralist audience manipulation. “Raiders” infuses viewers with the ideas that: a) Judaism is cool, or at least it was back in biblical times, b) being bookish and smart translates easily to being an action hero, c) knowledge of the past, especially arcane details of the past, is very useful in solving immediate problems, d) melodramatic serials of the 30s were actually pretty good, and e) in our collective memory, it’s not terribly important to make a distinction between the way things were in the 30s and the way movies of the 30s portrayed the Wild West of the late 1800s.

Simply put, Spielberg made the 80s magical, not just in their own right, but in their ability to make other epochs seem magical as well. Now, with his latest project, “Ready Player One,” (based on the 2011 novel by Ernest Cline) Spielberg invites an anxiety-ridden public to revisit the mass hallucination that he helped to create.

In the trailer, Wade Watts (Tye Sheridan), the hero, speaking to us as a young man in the year 2025, says that he wishes he had grown up in the 1980s. He wishes this because he inhabits the Oasis, a popular virtual gaming world based on 80s media. The creator of the Oasis has retired, and left behind an “Easter egg.” The player who finds the egg will get rich, and will also take over the Oasis. Players with a deep knowledge of 80s trivia are at an advantage.

But the 80s Watts imagines is not the 80s of Reagan, Chernobyl, British decolonization, and the fall of the Berlin wall. Rather, it is the collective unconscious of the pop-culture, technology-obsessed American teenagers of that time (like me). We see Watts making his way through an action-packed universe of recognizable non-existent machines, such as the time-traveling DeLorean from “Back To The Future.”

The fictional Watts, like the real me, grew up in a sprawling town in the Midwest. As I listened to Watts wax nostalgic about the decade he never knew, I wondered: Had he and I grown up in the 80s together, would we have been friends? Would he have sat with me in front of my family’s Apple II+, applying clear tape to copyright notches on floppy disks, fumbling through a book on how to program in BASIC? Would he have joined me at the local Apple User’s group, full of awkward old men rising to speak on the importance of LOGO? Or, to make it more exciting, would we have pirated software together — a tedious process that sometimes took days?

The fantasy of “Ready Player One” was already familiar in the 80s. Every kid who played video games or watched science fiction movies wanted to wake up one day to find himself inside the media, like Kevin Flynn in “Tron.” Real-life technology was advancing just fast enough that anything had started to seem possible. Home computers, VCRs, and cable TV. Video arcades. Space shuttles. It wasn’t clear exactly how all this was going to come together to create a digital utopia, but we knew that it would.

But 2018 is a strange time for this type of layered nostalgia. With advances in VR and tactile interfaces, it may not be long before at least some of the technology in “Ready Player One” becomes a reality (e.g. gloves with haptic feedback). So why are we, as a culture, fantasizing about the 1980s? (Other examples of recent 80s mania include the Netflix series “Stranger Things,” which both takes place in the 80s, and is constructed in an 80s style, and the 2017 film adaptation of Stephen King’s novel “It,” which came out in 1986, but is really about the author’s sentimentality for growing up in the 50s.) More specifically: Why are we fantasizing about the fantasies that we had in the 1980s?

Traditional Jewish nostalgia isn’t so different. When we talk about the promised land, we are talking about the land of milk and honey that was promised to Moses. That land may be Zion (as the headquarters of those who could see through the illusions of the masses in “Matrix Revolutions” was aptly called), but it is definitely not Israel, the modern nation-state that has been mired in turmoil since its creation.

We are nostalgic, not for the good times we’ve had but for the clarity of vision that comes from being in a terrible situation. Have you ever celebrated, reflected at length on, or intensely debated the nature of, the ancient Hebrews’ happy years in Egypt? You know, the ones that started with Joseph interpreting the pharaoh’s dreams, and ended, many generations later, with the rise of a new ruler, “who knew not Joseph”? Those must have been some good times. But they aren’t very interesting, in retrospect.

Nor are the years (decades? centuries?) of Adam and Eve, frolicking in the garden before they got bored. Stories that end with neat, happy-ever-after resolutions aren’t satisfying to adults. This is not because we don’t want happy endings in real life. It’s because, when we’re honest with ourselves, we have to admit that we haven’t seen many of them. “Let my people go” stirs the soul, because there are always some people, somewhere, who need to be let go. Equally mournful lyrics examining the question of whether any of those people ever end up anywhere good would be considerably less cathartic.

If the plot of “Ready Player One” sounds familiar, that’s because it’s also the plot of “Charlie And The Chocolate Factory.” Remember when we (both as individuals, and as a culture) were young enough to revel in the idea that the best way to escape poverty (or the helplessness of youth, as symbolized by poverty) was to prove your personal grit to an eccentric capitalist, who would then allow you to inherit the means of production?

Remember when, just a bit further back, we (as individuals, as a species, as mythic storytellers) were young enough to revel in the idea of our own youth, that our best years were ahead of us, that we had found wisdom early, that we were on a path to greatness? There’s a reason modern Jews often revert to Moses as our quintessential forefather: he might have been the last successful Zionist. He inspired the people, led them across the desert. We’re taught that he wasn’t allowed to actually enter the holy land, but let’s be honest: that directive, which ostensibly came from God, was interpreted by Moses himself. Maybe he made it up. Maybe he didn’t want to see the new world. Maybe he knew better.

Eons later, is there any Hebrew prophet of optimism and progress more powerful than Steven Spielberg? The great director’s Charlie Bucket victory is long since past. He drinks from the chocolate river. He runs the factory. And right at the moment when it looks as though civilization might actually fall apart, right when we’re yearning to call back to our ancestors wandering in the desert, to say Step more carefully! Something has gone wrong! — right then, our modern Moses summons mannah from the sky. Spielberg reminds us that, even as we reach the journey’s end, it’s still great fun to pretend that we’re back in the middle of it.

To be sure, Spielberg has brought us “Schindler’s List,” “Munich,” and other serious works. He’s not a child; he’s a man with an awareness of how complex and cruel life can be. But a mature perspective is not incompatible with the fetishization of a reconstructed past. Writing in “Longing for Paradise: Psychological Perspectives on an Archetype,” Jungian scholar Mario Jacoby explains that “the striving for the experience of Paradise…lives on within us, creating a nostalgia the intensity of which is in inverse proportion to the amount of external fulfillment encountered in the earliest phase of life.” In other words, the less of a paradise we actually had, the more we struggle to convince ourselves that we had it; the more we long to return to it.

Adam’s Eden, Joseph’s Egypt, Joshua’s Canaan, and Spielberg’s 1980s America all would have been wonderful places if they had actually existed. Not just to be enjoyed for what they never were, but also for the promise of the more perfect states, of existence and of being, that they would never lead to.