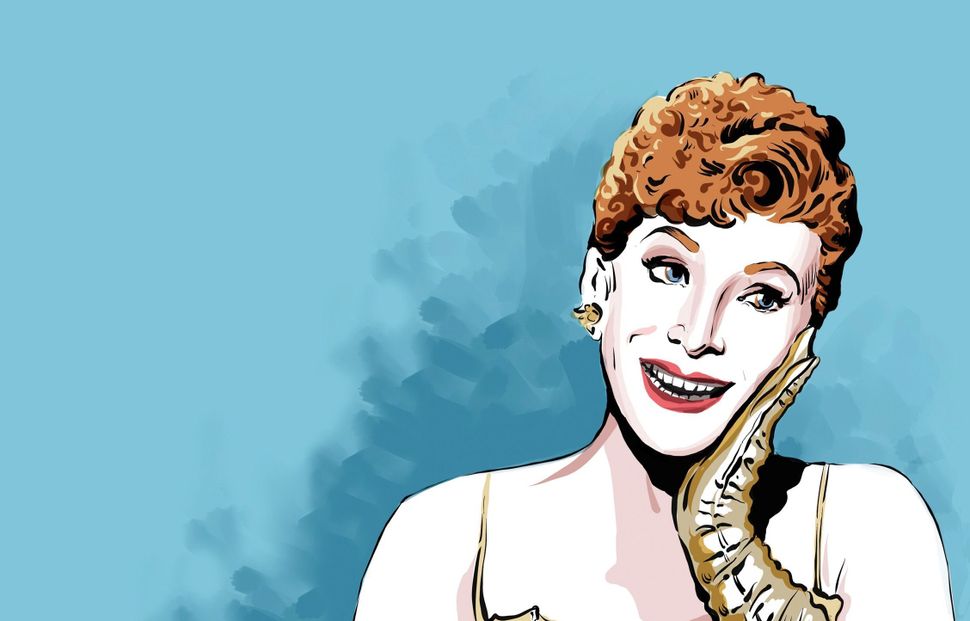 I am a doctoral candidate at Northwestern University, where I am currently working on a monograph about the very first Jewish female comedian, Jean Carroll — which is an academic way of saying that I am very, very invested in the actual Jewish, female pioneer of stand-up. I wasn’t sure that “Mrs. Maisel” would do her justice. And though it’s a great show, it doesn’t. To be clear, the creators of “The Marvelous Mrs. Maisel” have never claimed that their protagonist is supposed to be historically accurate. Though Sherman-Palladino says she drew inspiration from female stand-up pioneers like Totie Fields and Joan Rivers, the show makes no attempt to pretend that its protagonist, Miriam Maisel (nee Weisman), comes from anywhere but the fast-talking, whimsically witty minds of the Palladino pair.

But my frustration is not that they haven’t gotten the story “right” — meaning historically accurate; it is that the story they chose to create is so much less interesting than the actual story of the first Jewish female standup comedian. Just look at the story of Miriam Maisel held up against that of Jean Carroll:

Maisel is a well-heeled, Seven Sisters-educated lady whose parents financed her young life and whose adult life was financed by her in-laws. Carroll was an immigrant who, at age 12, kicked her abusive, alcoholic father out of the house and became the family’s primary breadwinner. Maisel was inspired and mentored by Lenny Bruce, patron saint of standup. Carroll began doing standup comedy in the 1940s, before Bruce ever set foot onstage. Maisel was the would-be victim of a no-talent husband whose dedication to stand-up comedy temporarily relegated her to note taker, booker briber and doting audience member. Carroll’s husband Buddy Howe dropped out of their two-person act because he recognized that he was holding her back. He shifted into the role of her manager, and ultimately became head of ICM Partners, one of the world’s largest talent agencies. Maisel is caught in a standard love triangle with her husband and his secretary. Carroll’s husband tricked her into getting married. He allegedly slept with Raquel Welch, and he and Carroll were separated for several years. During that time they still had dinner together most nights. In one scene, Maisel blithely drops off her kids to go to a club gig. Carroll ultimately left show business and sacrificed her legacy because the industry forced her to choose between caretaking and comedy.

Jean Carroll’s story is sometimes triumphant, sometimes sad, and utterly unexpected. Which makes for complex history, but great television. So why have Palladino and Sherman-Palladino gone with such a comparatively conventional story?

Part of it may be that they simply had not heard of Jean Carroll. Although she was revered as the top “comedienne” (the quaint term for a woman comic) of her day, had her own sitcom on ABC, appeared on “The Ed Sullivan Show” nearly 30 times and headlined at every major theater in the United States and London, she is notably absent from most histories of comedy.

Even Stephen Silverman, author of “Funny Ladies: The Great Comediennes of the 20th Century,” had not heard of Carroll. Years after his book was published, one of his female colleagues brought her to his attention with a rare “Ed Sullivan” clip that had been circulating on the internet. Silverman was instantly captivated, calling her “comedy’s embodiment of buried treasure.” By 2006 he was in the thick of shooting “I Made It Standing Up” — a documentary of Carroll’s life and legacy. Yet his efforts to exhume the “buried treasure” of Carroll’s story fell apart partly as a result of the financial crisis of 2008. The hours of interview footage with Carroll and her friends, family members and protégés — including Lily Tomlin — sat gathering dust in his closet. Noah Gardenswartz, a stand-up comic and writer for “The Marvelous Mrs. Maisel,” told me via email that he’d never heard of Carroll. He seemed surprised to find that such a major figure in comedy history had eluded him, particularly after he ran a quick Google search and watched the excellent but scarce video clips of her that are available on YouTube. A private company owns the majority of her television appearances, and they are available only on request, and for a hefty fee.

It appears that Rachel Brosnahan, who so brilliantly plays Miriam Maisel, had also managed to watch the YouTube clips. The New York Times article mentioned that Brosnahan had studied Carroll’s routines, calling her a “beautiful, graceful woman who wore pearls and dresses….” And indeed she was. Nearly every review Carroll got marveled at her ability to be both funny and feminine. As “The Marvelous Mrs. Maisel” points out through the character of Sophie Lennon (a kind of composite of Sophie Tucker and Phyllis Diller), common perception in midcentury America was that women could be either pretty or funny. However, 10 years before the time the show is set, Carroll herself had busted through that binary.

But there is so much more to her story: She was an immigrant who graduated high school by the age of 12; supported a family of five soon after; conquered vaudeville, nightclubs, radio and television, and became world famous in male-dominated stand-up comedy — and then gave it all up for her family.

Unlike celebrities for whom show business was a lifelong dream, Carroll got her start out of grim necessity. As an 8-year-old, she witnessed her father abusing her mother and had a revelation. Footage from Silverman’s defunct documentary shows Carroll reflecting: “I realized it was all economical. I was only 8 years old. But at the finish of that episode, I was no longer 8… I knew I had to grow up quickly…. Grow up. Get a job. Take care of your mother. Take her out of this…. And I made up my mind at that moment that never, ever, ever in my life would I be beholden to a man.”

The 8-year-old Carroll found that one of the more lucrative careers available to children was in show business. She got her start participating in an amateur children’s talent show that was actually fixed and was composed mainly of professional child actors. The financial autonomy that Carroll gained through the amateur-show racket came with an increased level of assimilation. Take, for example, the story of how she got her stage name:

“The announcer said, ‘What is your name, little girl?’” Carroll recalled. “I said, ‘Sadie Zeigman.’ He said, ‘Oh no… all the German buns are right here, 86 Street. Yorkville… they’ll kill you.’ He said, ‘You’re Jean Carroll.’

And she was. Never again did Carroll publicly reveal her actual last name. She was Jean Carroll all through vaudeville, all through her successful double-act “Marty May, Friend of Thousands, Annoyed by Jean Carroll,” through her internationally renowned dance-comedy duo with her husband, Buddy Howe, and up through the moment when Howe was drafted in 1947, and she ventured forth on her own.

When Carroll began performing stand-up comedy, the genre was so nascent that it did not even have a name. Reviewers simply used the clumsy term “comic monologist.” Critics were astounded by her “rapid-fire” delivery, which they seemed unable to describe without likening her to male comics like Groucho Marx, Bob Hope and Frank Fay. Over the course of her career, Variety referred to her as a “distaff Joey Faye” a “female Henny Youngman” and a “rather risqué female counterpart of Sam Levenson.”

Perhaps her greatest innovation was her casual, conversational tone, which was at first critiqued as “too intimate.” Over time, however, this conversational tone became hugely influential. Comedy legend Lily Tomlin recalls watching Carroll perform on “The Ed Sullivan Show” and marveling: “You were so cool, you had your own kind of style. It was very breezy and off-handed.”

But despite her overwhelming popularity and influence, Jean Carroll is not a household name like her male contemporaries. Carroll had to contend with restrictive gender norms that limited women to caretaking, often domestic roles. Carroll recalled audiences full of women giving her “that ‘Why aren’t you home minding the baby?’ look.” After her daughter, Helen, was born in 1945, Carroll found herself wondering the same thing. Both Carroll’s press clippings and the documentary interview footage depict a woman grappling with guilt at not being the singly-devoted mother and wife that society expected her to be. This guilt worsened as she and her husband separated, her mother and sisters faced terminal illness, and her teenage daughter struggled with health issues. Ultimately, when faced with a choice between starring in a sitcom and devoting herself to her family, Carroll chose the latter, explaining, “Yes, I still love show business, but I love my family more.”

Carroll’s story raises deep, meaty issues that are still at the core of so many women’s lives at this moment: Her determination not to be financially dependent on a man. Her need to downplay her ethnicity to “pass” in the mainstream media. The choice she had to face between her career and her family. And every time characters on the show express shock at a “girl comic” or a “pretty comic” in the person of Miriam Maisel — who faces none of those conflicts — an important story with resonant and enduring issues gets overlooked.

To be clear, I enjoy watching “The Marvelous Mrs. Maisel.” The classic one-liners and misdirection, the endless parade of incredible clothes, the celebration of a female standup comic — it’s everything I wanted in a show.

But my adoration is tempered by the recognition that for many audiences, this marvelous fiction will further eclipse the fact of Jean Carroll, the actual foremother of standup comedy. As we celebrate Mrs. Maisel for her courage, wit and ability to pair an outspoken viewpoint with a fabulous cocktail dress, let us also take time to celebrate — and learn from — the incomparable Jean Carroll.

Grace Kessler Overbeke is a doctoral candidate at Northwestern University.