How ‘BlackkKlansman’ Abandons Crucial Conversation About Race and Complicity 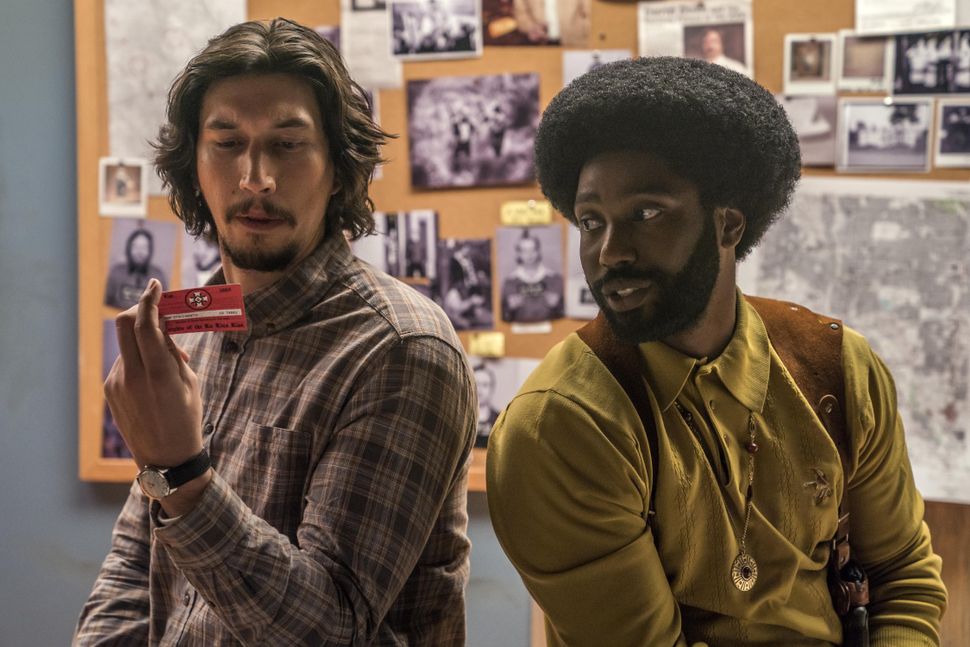 As I watched “BlackkKlansman” in a Colorado theater filled with white folks, I felt bored and extremely irritated. While Spike Lee’s latest joint is aesthetically beautiful, the content feels boring and reductive. I don’t think any black or Jewish person needs a flashy movie just to tell them that the Klu Klux Klan is dangerous. The film didn’t reveal deeper truths, just obvious ones.

I know it’s a comedy, but I still felt infuriated when I heard white people laughing at black characters when no joke had been made. Trust me, the mere mention of “soul brother” or patting one’s Afro does not warrant a hearty guffaw. Of course, I was most angry to hear white people cackling at the word “n—ger” before a punchline was introduced. Those stung.

My boredom and irritation highlight my biggest criticism of “BlackkKlansman,” which is that it is a film made to keep white people comfortable. It lets them off the hook for racism, allowing them to gain moral distance from the villainous Klan members. The movie depicts only overt racism, not the more insidious, latent kind that smiles in your face. And, since it’s a comedy, it lets the people in the audience laugh at that overt racism, all the while feeling assured that they aren’t racists themselves.

It’s also a pro-police movie, almost teetering on the edge of propaganda. And since we know how much racist white people love the police, I think it’s clear who that narrative serves.

“BlackkKlansman” is about domestic terrorists but, ultimately, it’s conflict-avoidant in the conversations and confrontations about race that it refuses to finish. This makes it the perfect film for people who want to avoid their own complicity in racism.

“BlackkKlansman” is based on the true story of Ron Stallworth (John David Washington), a black Colorado Springs cop who, in the 1970s, infiltrated the Klu Klux Klan with the aid of his white partner.

In the movie, his partner is Flip Zimmerman (Adam Driver), a white non-practicing Jewish police officer who comes to realize that he has been “passing” into mainstream American culture. Together, they work to prevent the members of the Klan from blowing up black people. Ron’s white partner did exist, but the character of Flip — including his Jewishness — is a fictional construct created by Jewish screenwriters Charlie Wachtel and David Rabinowitz.

Wachtel and Rabinowitz have said that they chose to write Flip as Jewish character to “up the stakes” of this buddy cop film, ensuring that both characters had a lot to lose. It was a great decision because it started an important conversation about anti-Semitism in white nationalism. I just feel that in “upping the stakes” for both Ron and Flip, a lot of conversations got lost. They are in danger, yes. But they’re also plenty complicit, and I feel that the audience is pushed away from making that realization.

Ron is part of a racist law enforcement system, spying on the “radical” Colorado Black Student Union and their president (later his girlfriend) Patrice (Laura Harrier). Black people have always had to walk a line between surviving in an oppressive white world and being an accomplice of it, but it’s upsetting to see his character display so little self-awareness of the consequences and wrongness of his actions.

Ron takes great care to distance himself from black radicals, insisting that he can care about his people and still be part of the police force. But whether he cares about black people or not is moot; he’s still part of a racist system. He’s still co-workers with a man who sexually assaulted his girlfriend and called her a “black bitch,” during a traffic stop. One wonders how Ron’s choice to work with people like this could be possibly be construed as heroic.

With Ron, Lee and the screenwriters present us with a character who is making some truly awful choices — lying to his girlfriend about being a police officer while spying on her; jumping at chances to investigate drug dealers and users, where he says he “fits in”; and agreeing to bury an investigation that would have exposed Klan members to the public. They present us with this deeply flawed character, but they also push us to excuse him by making him the hero and providing us with justification for his choice.

White viewers, who this movie feels made for, may interpret Ron’s support of law enforcement as a heroic and intelligently nuanced stance. But black viewers don’t need to bury ourselves in nuance, if that nuance is just excuses for police brutality. And given that Lee was paid $200,000 by the New York Police Department to make an advertisement to “facilitate the relationship between cops and the Black community,” it’s important to question why Lee chose to make a movie that ultimately paints the police in a positive light. Lee’s movies are usually catered towards black people, so pandering to a white audience does seems like a departure for him.

This movie also suggests that police can be relied upon to fight white supremacy. That’s a ridiculous notion – and a dangerous one, especially when we know that law enforcement agencies across the nation are actually being infiltrated by white supremacists. But this film tries to make us believe that violently racist cops are rare – the other ones just need to make a nice black friend, like Ron. One of the scenes in “BlackkKlansman” pushes this message the hardest. It shows a racist cop being arrested when he admits to Ron that he is willing to kill black people for no reason. Unfortunately for him, it’s a set-up. The entire police department is in the bar, listening to him with recording devices. Bewildered, he is led out in handcuffs, and the bar full of cops – the same ones who laughed at Ron and called him racist slurs like “toad” – cheer while they clink their glasses of beer together. All is right with the world, and Ron is finally in the it-crowd. Black people don’t need another movie where we are given implicit messages that tell us it’s our responsibility to stop ourselves from experiencing racism. We don’t need to be told that white people just need to get to know us, and then everything will turn out fine. White society, though, will never tire of watching movies like that. I am sure that many would like to cling to the notion that police brutality is about a few bad cops, or that racism is about a few bad white people. It’s easier to think that there are clear solutions. “BlackkKlansman” lets people believe that. It lets people believe that as long as you’re a black cop, you can’t brutalize black people. Or that if you’re Jewish, you can’t perpetuate racism. Flip, the only Jewish character, illustrates this. Flip isn’t invested in Ron’s cause until he starts to think about the ways that his Jewishness puts him in danger from the Klu Klux Klan.

Throughout the first half of the film, Flip laughs along with offensive jokes at Ron’s expense. Damningly, he also brushes off police brutality by tacitly accepting his co-worker’s murder of a black teenager, saying he wouldn’t report his fellow officer because, “We’re a family. Right or wrong, we stick together.”

Throughout the film, Ron is pushed to confront his complicity by other black characters – notably Patrice and Kwame Ture (Corey Hawkins), who delivers a stirring sermon about black self-love. But Flip is never given those firm pushes. Instead, Ron dances around calling his white partner complicit in racism, never finishing the conversation they need to have. Flip’s racism is something the audience has to crane their neck to see.

In two crucial scenes, Ron and Flip have talk about how Flip’s personal Jewish identity (or lack thereof) doesn’t change the reality of the danger he faces. Flip thinks that fighting the Klan is a “crusade” for Ron, while he sees it as just a job. Ron replies skeptically, telling him that because he’s Jewish, he should care. Ron then accuses him of “passing for a WASP, white Anglo-Saxon Protestant, cherry pie, hot dog, white boy.” Flip admits that investigating the KKK has led him to reconsider his Jewish identity. But after these short conversations, the racism that Flip has exhibited is assumed to be cured, and we never hear about it again.

Here is a perfect example of the missed conversations and confrontations in this movie. In these scenes, it is suggested that Flip’s prior expressions and condoning of racism are cancelled out by his experience of anti-Semitism – a fundamental untruth that does both issues a disservice.

To be fair, Flip is the best and latest installment in an ongoing evolution in how Lee handles his Jewish characters. He’s been called out for relying on anti-Semitic tropes before, in trying to talk about racism in the Jewish community. He’s been attempting to have important conversations, but at times has lacked the tools, compassion, or experience to do so. This time around, with two Jewish screenwriters, his portrayal of Jewishness was much less stereotypical, with many Jewish viewers strongly identifying with Flip.

But in his everyday life, Flip is not “passing,” he is accepted as a full member of a racist system. But the underbelly of that system, the white supremacists who heavily rely on Christianity as a pillar of control and subjugation vehemently reject him. Flip doesn’t struggle with this realization, however, or explore it on his own terms. He just magically becomes a black ally, just as Ron magically becomes a freedom-fighting cop.

In the end, it feels as though Lee’s new joint is a groundbreaking film — but only for those who want to have a basic understanding of racial issues and an assurance that they aren’t part of them. “BlackkKlansman” may be about the people who suffer under white supremacy, but I’m not sure it was made for them.

How ‘BlackkKlansman’ Abandons Crucial Conversation About Race and Complicity