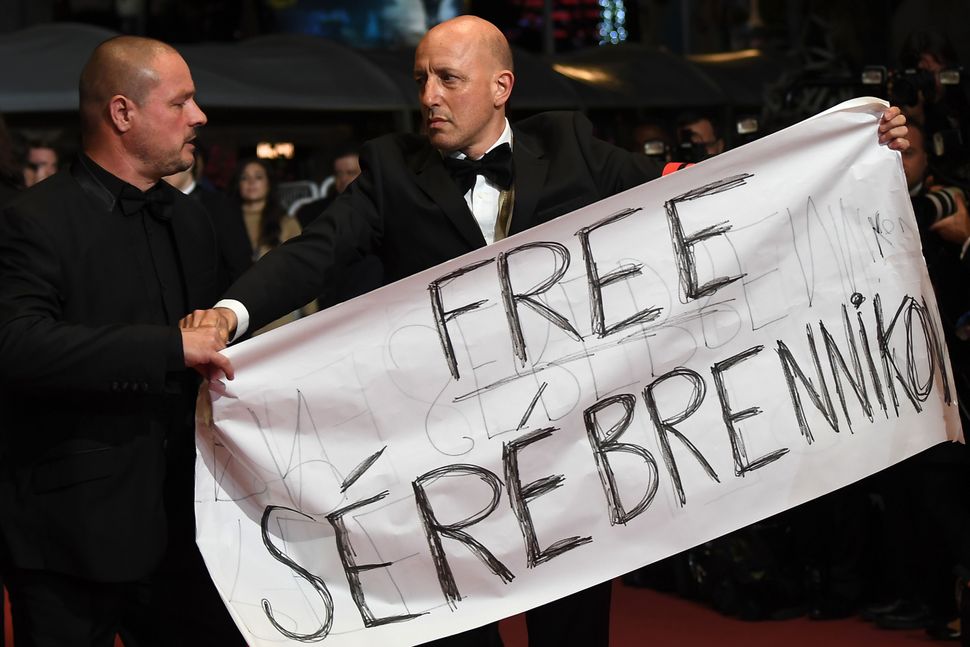 Protesters at Cannes call for the liberation of Kirill Serebrennikov. Image by Getty Images

“I’ve lived for eight months as if on the other side of the mirror,” an exasperated Kirill Serebrennikov told a judge in Moscow on April 18 of this year. It was the Russian-Jewish director’s most recent day in court since being placed under house arrest last August on corruption charges that are widely considered to be trumped up. Serebrennikov, who at 48 is arguably Russia’s most acclaimed theater director, tried to sway the judge by sharing some good news he had recently received: “Just recently the movie “Leto’, which we were completing when we met you, Your Honor, in the court hall for the first time, was invited to the main competition of the Cannes Film Festival.”

Unsurprisingly, his appeal failed. The following month, the director was unable to travel to Cannes where his luminous period piece about the underground music scene in Leningrad of the 1980s was one of the festival’s biggest critical and popular hits. During his day in court, Serebrennikov pointed out irony of not being able to represent his country at the world’s most prestigious film event. “I am very thankful to my film crew which managed to help me finalize the film ‘Leto’ in these outstanding circumstances. And now this film will represent Russia in Cannes,” he addressed the judge shortly before being escorted back to his apartment, where he is unable to receive visitors or stay connected to the outside world via internet.

“Leto,” currently playing the festival circuit, is only the latest Serebrennikov project to go ahead in the director’s absence: Earlier this year, his controversial ballet about the life of Rudolf Nureyev premiered at the Bolshoi in Moscow and Oper Stuttgart performed his Africa-set production of Humperdinck’s “Hansel und Gretel” as a work-in-progress. The Gogol Center, the avant-garde theater in Moscow that Serebrennikov leads, has continued as best they can without their artistic director.

In the course of Serebrennikov’s trial, the prosecution hasn’t bothered to produce any evidence to support the embezzlement claims, and all arguments supplied by the director and his legal team have fallen on deaf ears. By all indications, Serebrennikov, whose work has touched on subjects taboo in Russian society and who has been a vocal critic of Putin, seems to be the target of a political witch-hunt.

The film follows the rise of Viktor Tsoi (played by German-born actor Teo Yoo), who went on to cofound the influential band Kino. The script, co-written by the director along with Michael Idov and his wife Lily Idova, focuses of Tsoi’s early friendship with Mike Naumenko (Roman Bilyk: in real life the lead singer of the Russian band Zveri) the front man of the well-known Soviet rock band Zoopark and something of a mentor to Tsoi in his formative years. The film charts their working relationship and friendship, including a possibly fictional love triangle between the two rockers and Natacha (Irina Starshenbaum), Naumenko’s girlfriend and mother of his child. In a key scene, Tsoi needs to submit his lyrics to the Leningrad Music Club censor for approval. Unable to fathom poetry that doesn’t idolize workers’ struggles or reflect the moral rectitude of soviet man, the censor ultimately approves the Lou Reed-inspired songs, with their occasional banality and sarcasm, as comedic ballads.

“I don’t write humorous songs!’ Tsoi tries to argue with the officials as Mike and his band mates do their utmost to shut Viktor up. Any way to get past the censors is good enough for them. The events of the film end long before Tsoi’s death in a car crash in 1990 at the age of 28 – Naumenko died a year later, at 36, of cerebral hemorrhaging – allowing us to revel in the musician’s energetic, messy and often childish rise to fame. Throughout we are treated to gently surreal musical numbers when the bottled-up exuberance of the main characters makes the stony-faced commuters that surround them break out into song. “Psycho Killer” “Perfect Day” “The Passenger” and “All The Young Dudes” are among the rock anthems that erupt in a gleeful daze of fancy camera movements, quick-cut editing and graffiti-like animation.

The film’s producer Ilya Stewart has suggested a parallel between the events dramatized in the film and the circumstances under which artists like Serebrennikov labor in today’s Russia. According to Stewart, a lot of people forget that Tsoi was not a political artist. “It’s a mistaken impression that a lot of people still have, that this was a politically vocal artist. His lyrics were often perceived that way, but they just came straight from the heart. It’s very simple and very accessible poetry. In a way, it’s about what the film is about. It’s about the desire for freedom and about love. I think Kirill tried to capture the same emotion for the film’s heroes. Even though the film is set in the 80s, it ends up talking about the state of things today. He might be doing it unintentionally, but that’s his vision. I think Kirill managed to draw a parallel between that young crowd and today’s young Russian creative crowd who are thirsting for freedom, creativity and not wanting to live within boundaries.” Like the film’s rock and roll heroes, Serebrennikov doesn’t strike Stewart as particularly or overtly political. “There’s so much room for critique and if you have a global citizen mindset, which Kirill has, it just comes out naturally,” he explains.

Such a mentality may in fact be Serebrennikov’s only crime. If the charges against Serebrennikov have been fabricated (as appears to be the case), what exactly he is being punished for is far from clear. Is it outright anti-Semitism? Anger over the depiction of Christianity in “The Student”? His participation in anti-Putin protests in 2011 and 2012? Or maybe the frank acceptance of Nureyev’s homosexuality in his Bolshoi debut?

“It’s a national discussion in Russia and there are hundreds of theories,” said Stewart. “It’s all of those things you mentioned and possibly none of them. Kirill’s been outspoken in a creative way for the past decade or so. He’s done outspoken material in theater, ballet, film and elsewhere. In my opinion, he could have rubbed anyone the wrong way.”

As a film about artistic creation and struggle under communism, “Leto” reminded me of another recent Russian film: Alexey German Jr.’s “Dovlatov,” Common to both films is a meticulous production design that evocatively and persuasively recreates culturally agitated milieus during the late Soviet Union.

From day one, Serebrennikov strove for authenticity by telling the large cast to only buy and use products that were available three decades ago, including cheap port wine, Russian cigarettes and low grade salami. Much of the film was shot in a run down apartment in St. Petersburg that was virtually unchanged from the era of the film. Like in “Dovlatov,” one of the most memorable things about “Leto” is the warm smoke-and-booze-filled creative community the film recreates (although some veterans of the 80s Leningrad music scene have found that the depiction rings false).

It’s a world of close-knit relationships and the everyday struggles of ambitious young people who yearn to break out of their narrow, dingy and out-of-date confines. Stewart added that it was important for the director not to present a sanitized version of that era and of that scene. “A lot of the government-funded television and commercial films from recent years are about the Soviet period. But Kirill and the way he approaches it is different from the clean, crisp and ideal world drawn by most of these period films,” he explained.

While Viktor Tsoi, Mike Naumenko and even Sergei Dovlatov were not dissident artists, they nevertheless represented the Soviet counterculture in the late 70s and 80s. What about counterculture in today’s Russia? “I think it’s theater and I think it’s his theater, the Gogol Center,” Stewart explains. “The talented young actors who he’s mentored and are now stars in their own right are the closest thing to these underground Leningrad rock stars. Because they are free, because they create and they don’t try to fit into a system. Despite the house arrest, his theater’s still very popular. It’s sold out every day.”

“For us, the most important thing for us is that despite the pressure, the artistic vision survives and lives on,” said Stewart. “And surprisingly this year has been one of his most creative years in terms of output. This is a fantastic output for a person who’s been silenced for the past nine months.”

A.J. Goldmann is Munich-based writer and a longtime contributor to The Forward.