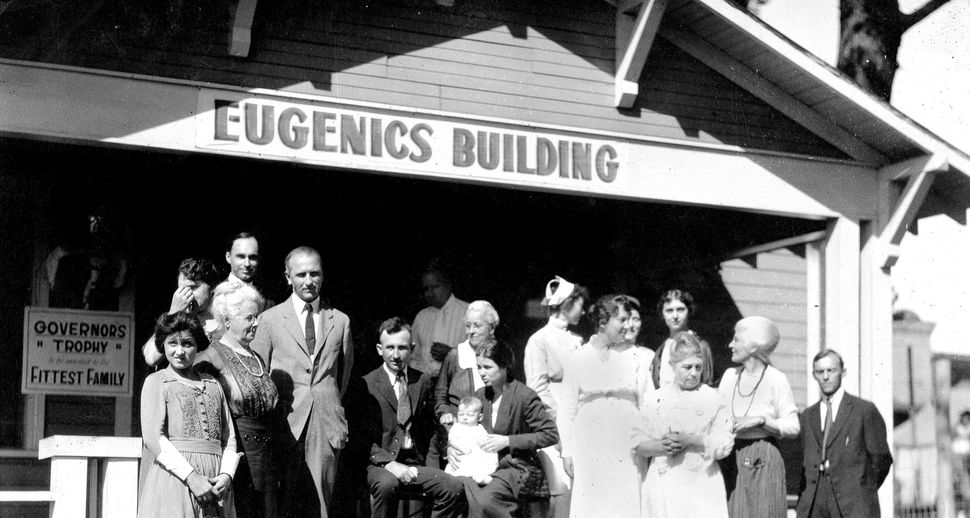 For most Americans, eugenics exists in the cobwebs of history. It’s a musty, bogus relic now universally dismissed by the scientific community as a racist doctrine that misunderstands sociological factors. But watching the documentary “The Eugenics Crusade,” which premieres on PBS October 16 at 8:00 PM, one finds eerie echoes of the current discourse around immigration.

“Can we build a wall high enough around this country so as to keep out these cheaper races?” Charles Davenport, who popularized eugenics in America, wrote in a May 1920 letter quoted halfway through the documentary. The letter’s recipient was Madison Grant, the author of “The Passing of the Great Race” a eugenics-influenced text that infused the pseudo science with its first explicit racism.

When Davenport first became an adherent of eugenics, a theory founded by British statistician Francis Galton, its concern was selective breeding of the “talented” or intelligent for brighter, healthier offspring. Brought to American shores and studied by Davenport at a research station compound on Long Island, eugenics soon evolved from mating farm animals to hereditary studies of the intellectually handicapped and the “morally delinquent” elements of society.

The documentary, written and directed by Michelle Ferrari, a longtime writer for PBS’s American Experience series of which this film is a part, illustrates how the utopian idea of contrived natural selection to reduce societal ills insinuated its way into the American mainstream, and just as quickly absorbed the culture’s prejudices.

Eugenics’ main proponents were men and women like Davenport and Grant: White, American Protestants who saw their vision of America threatened by poverty, prostitution and alcoholism. It didn’t take long for eugenics — which believed these threats to be passed on over generations — to make the leap to forced sterilizations of the “feeble-minded” and policies designed to limit immigration of “inferior” races.

“Eugenics is easy to accept because it preserves existing hierarchies,” historian Thomas C. Leonard says in an interview. “It doesn’t seek to overturn them. What it did was lend a new weight to established hierarchies.”

Perhaps surprisingly the documentary shows through archival footage and a wealth of primary sources that eugenics had broad appeal for many sectors of American life. Reproductive rights advocate Margaret Sanger (the subject of a previous documentary by Ferrari) along with social reformers from the temperance movement and anti-poverty coalitions favored eugenics doctrine as a way to meet their aims. Teddy Roosevelt wrote fan mail to Davenport; in his essay “The Souls of Black Folk” W.E.B. Du Bois outlined a plan to combat racial prejudices by encouraging the procreation of what he called “the Talented Tenth” of the African American population. Meanwhile, WASPs were concerned that immigrants would infiltrate their bloodline.

By the 1920s, eugenics was a staple of Ivy League lecture halls and state fairs where “Fitter Families” were judged alongside livestock. Harry Laughlin, the Superintendent of Davenport’s Eugenics Records Office, which kept studies of Americans’ lineage and intelligence test results, testified to Congress with cherry-picked statistics about the delinquent nature of different nationalities to bolster an immigration quota bill. His research took a particularly unfavorable view of the intelligence of Jews.

In 1924 President Coolidge signed the Johson-Reed Act into law, restricting immigration by 97%. The quota system held for decades after, and the documentary confronts the immediate consequences, cutting to a photo of a German shop vandalized with Stars of David and the word “Jude.” In the film, author Adam Cohen mentions that Anne Frank’s father Otto’s efforts to flee to America were thwarted by the 1924 Immigration Act. “We think about Anne Frank dying in a concentration camp because the Germans thought Jews were genetically inferior. But to some extent Anne Frank died in a concentration camp because the US Congress believed that as well,” Cohen says.

The documentary doesn’t dwell much on the Nazi implementation of eugenic principles, but builds a damning case for how the American model influenced Hitler’s programs. The forced sterilization of undesirables that entered into German law in 1933 was based on Laughlin’s own plans and Hitler’s “Mein Kampf” drew heavily on Grant’s “The Passing of the Great Race,” calling for the Fatherland to espouse the ideas of American eugenicists.

While the Great Depression’s equalizing effects found most scientists and Americans distancing themselves from eugenic ideology, the Third Reich adopted it as national policy. Following the liberations of Buchenwald and Dachau, where eugenic practices saw their deadliest application, it became a dirty word in the States, but the forced sterilization of the “feeble-minded” continued into the 1970s.

The imprint of eugenics’ worst ideals still shape American policy. There’s little difference between Davenport’s call for a wall and Trump’s, though they’re separated by nearly 100 years. “The Eugenics Crusade” is a warning from the past, demonstrating the ease with which ugly ideas can be accepted when they play on our fears and, not least significantly, our aspirations for a better society.