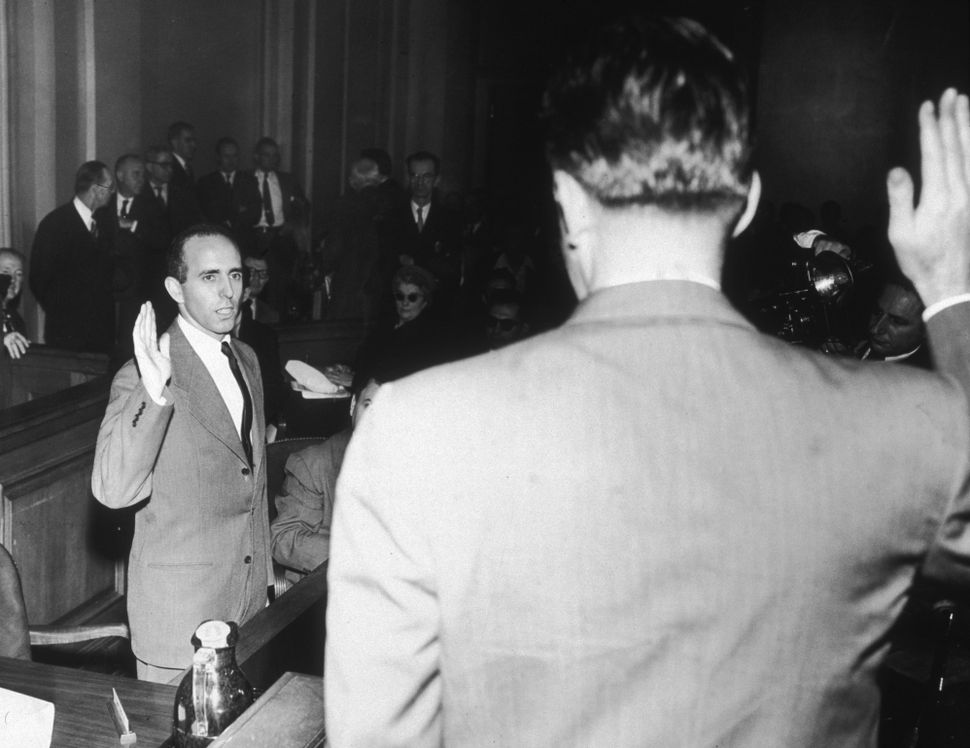 It started three years ago. I was the lone staff member welcoming guests to Jewish Museum Milwaukee (JMM) on an Air Show Sunday. It had been a pretty slow day. My office was filled with the droning of jet engines, and people who weren’t into watching the Blue Angels were avoiding the Milwaukee Lakefront. I could have been organizing my desk or getting ahead on group visitor outreach, but instead I checked Facebook where I discovered a preview for “Trumbo,” the Bryan Cranston movie about blacklisted screenwriter Dalton Trumbo.

The short teaser transported me, not to Hollywood in the 1950s but to rural Tennessee in the 1990s. In my high school, I was one of two Jews (the other was my sister). I was used to being different, but I argued hard for liberal viewpoints in class discussions. During senior year, when the time came for me to select a research paper topic, I chose the Hollywood Blacklist. It appealed to me for both entertainment and political content, but also because it was an opportunity for me to research something that I would have never studied in school.

The Hollywood Blacklist started in 1947 after the House Un-American Activities Committee convened hearings to address potential Communist subversion in the film industry. Movie executives, stars, and screenwriters testified, including Ronald Reagan, Walt Disney and Louis B. Mayer. The ten people who refused to testify and were labeled unfriendly witnesses became known as the Hollywood Ten. They all had been members of the Communist Party, and cited the First Amendment as a defense in the Hearings. Movie studios, under financial pressure and the threat of boycotts, met to discuss the HUAC Hearings and issued a statement saying, “We will not knowingly employ a Communist or a member of any party or group which advocates the overthrow of the government of the United States by force or by any illegal or unconstitutional methods.” The Hollywood Ten lost their jobs and as HUAC expanded the Hearings in the 1950s, hundreds of suspected Communists were impacted.

My initial assumption was that someone else must have already created a Blacklist exhibit, and JMM could bring it to Milwaukee, but I could find only one exhibit that had been mounted about the Hollywood Blacklist — a 2002 temporary exhibit by the Academy of Motion Pictures Arts & Sciences, which had been fully dismantled. As luck would have it, JMM was perfectly positioned to fill this void. One of the largest Blacklist-related archives resides at the Wisconsin Center for Film & Theater Research, part of the University of Wisconsin-Madison, which became an important partner in starting this research. Theater professor Robert Hethmon took the initiative right as the Blacklist was starting to erode, contacting blacklistees to preserve their papers. Six of the ten Hollywood Ten have archives there; Kirk Douglas’ archive related to the making of “Spartacus” is there, and so is Trumbo’s archive.

I felt that this was a story that a Jewish museum should be telling, highlighting the challenges of assimilation, achievement and political pressure. I pitched this exhibit to my colleagues and board of directors as an opportunity to explore a story with Jewish connections that would allow us to pursue big questions around challenges to civil liberties and diverse ideas of what it means to be American. Jews are central to this story. Six (John Howard Lawson, Alvah Bessie, Herbert Biberman, Lester Cole, Albert Maltz and Samuel Ornitz) of the Hollywood Ten — the first ten men called before the House Un-American Activities Committee (HUAC) in 1947 — were Jewish. The film executives who voted to prohibit those like the Ten from working were predominately Jewish as well.

This exhibit focuses on the politics of fear that drove the HUAC Hearings and Hollywood’s response, creating a short film that approaches the context of the hearings. The exhibit has three main foci — establishing the history of the time period, exploring what the FBI considered Communist subversion in film, and examine the personal toll of the blacklist through the experiences of those who were blacklisted.

In thinking about the relevance of the Hollywood Blacklist at the outset in the summer of 2015, I felt that there were (and remain) interesting connections to Islamaphobia, the impact of the PATRIOT Act, and social media mob justice. The political landscape today is markedly different from the one in which I started.

Since the 2016 presidential election, references, comparisons and connections to the Red Scare have multiplied. I have had Google Alerts running on the words “HUAC” and “Hollywood Blacklist” since I started this project; since the election, the number has skyrocketed. The Blacklist is connected to diverse issues ranging from climate change to #MeToo, from Trump’s use of the word “witchhunt” in reference to the Russia investigation to the perception of American institutions infiltrated by forces disloyal to the administration.

There is also a parallel to the saga of Colin Kaepernick. Kaepernick is currently involved in a legal struggle with the National Football League alleging that collusion has kept him out of the league after he began kneeling to bring attention to the Black Lives Matter movement. Kaepernick is at the center of a culture war, unable to work, but able to get high profile endorsement deals — a pariah to some and a martyr to others. As was the case with the blacklistees of the 1950s, Kaepernick’s detractors question his talent. Yet the divided nature of the media today enables him to be lionized by the left in a more public sphere than those who were blacklisted.

At its core, this exhibit seeks to explore the period and challenges of the Blacklist to provide context for the central questions that we are facing today. While the balance between national security and personal freedom, questions of loyalty, and the obstacles to resistance are all important themes, the one that resonates the most with me is the question of patriotism. Those on the Committee and many of those who testified before it, saw this as a fulfillment of their patriotic duty. Ronald Reagan quoted the founders in his testimony saying “I believe that, as Thomas Jefferson put it, if all the American people know all of the facts they will never make a mistake.”

At the same time, those who refused to testify also saw themselves as part of the tradition of American truth-tellers. Hollywood Ten Member Albert Maltz, in his statement before HUAC, also invoked Jefferson, “Why else does the Committee now seek to destroy me and others? Because of our ideas, unquestionably. In 1801, when he was President of the United States, Thomas Jefferson wrote: Opinion, and the just maintenance of it, shall never be a crime in my view; nor bring injury to the individual.” Both supporters and opponents of HUAC claim they are the descendents of American values and ideals.

We are in an increasingly divided country and the inability to communicate and compromise overwhelms the political process and polarizes communities. This sensibility did not start or end with the Red Scare, but schisms that emerged continue to plague our political system. In thinking about correctives, I go back to Republican Senator Margaret Chase Smith (Maine), who responded to her colleague Joseph McCarthy (Wisconsin). The HUAC Hearings predate McCarthy’s famous 1950 speech alleging Communist infiltration in the State Department and Hollywood is never his focus. Using the same political rhetoric, McCarthy became the towering figure of the time. Smith attempts to neutralize his rhetoric four years before he was censured by the Senate, saying, “It is high time that we stopped thinking politically as Republicans and Democrats about elections and started thinking patriotically as Americans about national security based on individual freedom. It is high time that we all stopped being tools and victims of totalitarian techniques-techniques that, if continued here unchecked, will surely end what we have come to cherish as the American way of life.”

“Blacklist: The Hollywood Red Scare” will be open through February 10, 2019. I marvel as I watch visitors of all stripes unpack the time period. There are so many lessons to gain from understanding this time period. I am heartened by the fact that the country emerged from the Red Scare and while redbaiting continued to be a recurring political rallying cry until the fall of Communism, it did not have the same power. The Hollywood Blacklist crumbled; talented people continued to work, despite the restriction on their employment. The Blacklist eventually caved under pressure from judicial challenges and the free market system. The country emerges, but the Blacklist and the continued politics of fear continue to cast a long shadow.

Ellie Gettinger is the education director at Jewish Museum Milwaukee.