With ‘The Kominsky Method’ Chuck Lorre Gets The Netflix Boost 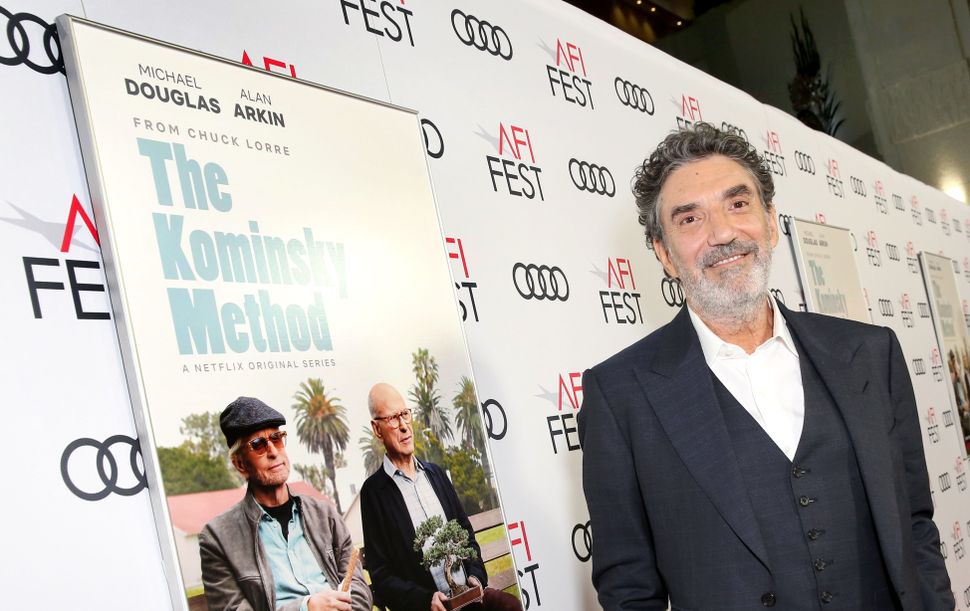 A welcome, if counterintuitive, symptom of the age of Netflix has been the revival of old Hollywood careers. It may have all started with 2015’s “Grace and Frankie” which gave a starring platform to Lily Tomlin and Jane Fonda, whom studios had tended to neglect or bury in grandma roles.

In “Grace and Frankie” Tomlin and Fonda defy typical typecasting, presenting as active, sexual beings who, by dint of their husbands’ longtime affairs (with each other) fall into an “Odd Couple”-esque relationship.

Netflix’s new Michael Douglass and Alan Arkin vehicle “The Kominsky Method” shares the over-the-hill Odd Couple setup, (more familiar in the male mode), and gives the two Oscar winners some great material, but it’s not their careers that are being reinvented: It’s show creator Chuck Lorre’s oeuvre that’s getting a makeover.

With “The Kominsky Method,” Lorre, the creator and show runner on the Emmy magnet smash hits “The Big Bang Theory,” “Two and a Half Men” and “Mike & Molly” has done something remarkable. He’s made a near-flawless leap from the broad, joke-dense three-camera format to Netflix’s prestige TV sheen and its steady focus on character over gags.

“Odd Couple” aged up or, if you will, “Grumpy Old Men” with a more Semitic Jack Lemmon, the eight-episode first season follows the exploits of Sandy Kominsky (Douglas), a breezy, well-regarded acting coach who embodies the aphorism “those who can’t do teach.” Out of film and TV work, Kominsky is nonetheless chummy with his longtime agent Norman Newlander (Arkin), a prickly macher whose stable of talent seems to include Patti LaBelle, Jay Leno and Elliot Gould. When Eileen (Susan Sullivan), Norman’s wife of many years, dies, Sandy is tasked with looking after his friend – but he has to figure himself out first.

The show’s episode names riff on the sentence structure of Stanislavski’s “An Actor Prepares” and reveal the main concerns and fatal flaws of our leading men. “Chapter 3: A Prostate Enlarges” begins a season-long arc following Sandy’s health problems, “Chapter 6: A Daughter Detoxes” features Norman’s daughter Phoebe (Lisa Edelstein) and her return to rehab following a series of public and private embarrassments, including passing out at the shiva for her mother.

But the first chapter’s title “An Actor Avoids,” is the touchstone for all of Sandy’s problems: He avoids reminders of his own mortality; his responsibility to his daughter Mindy (Sarah Baker) and his student-turned-lover Lisa (Nancy Travis); and, we learn, even paying taxes. It’s been a while since we’ve seen Douglas this tuned into a role. Alongside Arkin, who plays poignant moments just as well as the snide remarks we’ve come to know him for post-“Argo,” they conjure a chemistry that’s a pleasure to behold.

Lorre also pulls off a rare balance between the to-the-hilt humor from his long TV runs and a subtler humanism that’s new to his life on Netflix. One episode may end in a Barbra Streisand drag performance at a funeral, but the next chapter counters the camp, cutting to credits over Norman breaking down at the sight of his late wife’s dress at the dry-cleaners.

Free of a laugh track and full of Yiddish syntax, Lorre’s writing, co-scripted in many episodes by “Fallon” producer Al Higgins and “Disjointed” creator David Javerbaum, achieves new depth. While many have lambasted “The Big Bang Theory’s” over-reliance on references over jokes, Lorre feels in his element here, writing about a world he knows and sees himself in. That care shows through, bringing an earnestness that viewers may have only glimpsed in the form of the confessional vanity cards that end his network shows.

Add in a scene-stealing turn by Danny DeVito as a tactless urologist and there’s not much to nitpick here apart from some residual out-of-place banter that feels more primed for primetime. Even if you roll your eyes at “Young Sheldon” and the greater Lorre-verse on CBS, “The Kominsky Method” proves there is more than madness to the sitcom king’s success.

It’s telling that Sandy laments “those little pischers on that ‘Big Bang’ thing are making a million bucks a week.” The show in question is set to end its run next year in its twelfth season. Could it be that Lorre, with Netflix backing him, is glad to be leaving that world behind?

With ‘The Kominsky Method’ Chuck Lorre Gets The Netflix Boost