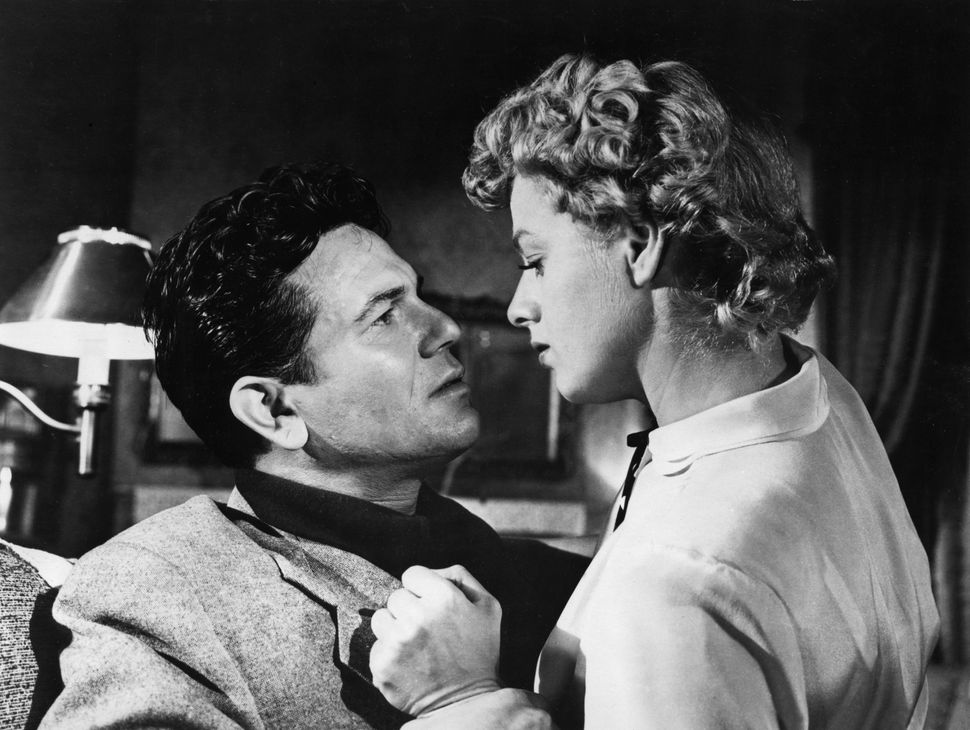 As in his earlier hit “Body and Soul” (1948), John Garfield’s final film “He Ran All the Way” (1951) begins with the actor waking up from an apparently very unpleasant dream. While the return from a nightmare is not an uncommon twist in those older Hollywood movies that veer into darker territory — the familiar “it was all a dream” ending — it sets a very different tone when placed at the beginning. Among other things, it’s immediately establishes the temperaments of Garfield’s characters and, by extension, his jittery, overstimulated star persona. This is a haunted, nerve-shot person, we are given to understand, a guy for whom even sleep offers no escape.

“He Ran All the Way” plays on Saturday at Lincoln Center in a series of films chosen by German filmmaker Christian Petzold to play along a complete retrospective of his own movies; and indeed, with its admixture of both of-the-moment political concerns and almost metaphysical fatalism, it makes a fitting companion piece to the director’s newest film, “Transit.” Blacklisted from Hollywood and under persistent threats from the House Un-American Activities Committee (HUAC), Garfield’s weak heart gave out in 1952 when the actor was a less-than-august 39 years of age, shortly after the film’s release. A late film noir, “He Ran All the Way” shows unambiguously that the star knew how it felt to be a hunted man. Garfield stars as petty thief Nick Robey, who accidentally kills a policeman during a botched payroll robbery and holds a family hostage in an attempt to evade the ensuing dragnet, and as Robey’s paranoia and desperation expand to obliterating proportions, he’s almost disturbingly convincing.

Born Jacob Julius Garfinkel to Russian Jewish parents on Manhattan’s Lower East Side, John Garfield was at once ahead of the curve and decidedly a creature of his time. In the thirties, he fell in with the Group Theatre, a New York troupe of leftist proclivities whose most famous member was playwright Clifford Odets. These were the sort of self-serious East Coast idealists parodied by the Coen Brothers in their weirdest film, “Barton Fink” (1991), whose protagonist finds himself writing a boxing film that sounds more than a little like “Body and Soul.” While never much more than a political dilettante, Garfield did internalize a sort of natural democratic sensibility that helped to make him a surprise hit with depression-era audiences. Dark, intense, and on the short side, he gives off a counterintuitive impression of both livewire unpredictability and easy, at times balletic grace. Trained by Lee Strasberg and Stella Adler, among others, in the New York theatre world, he was among the first to bring to the screen the acting techniques favored by some of the biggest stars of postwar American cinema.

Today, Garfield is probably best known for the films he produced independently, after his contract at Warners expired, particularly two films bearing the mark of Abraham Polonsky, “Body and Soul” and “Force of Evil” (1948). An authentically committed Marxist, Polonsky was blacklisted from Hollywood when he refused to testify after being called before HUAC as an unfriendly witness (“Tell Them Willie Boy is Here,” his follow up to “Force of Evil,” wouldn’t appear until 1968). Inspired by the story of Jewish boxing sensation Barney Ross, Polonsky wrote “Body and Soul” for fellow left-wing director Robert Rossen (though unlike Polonsky, Rossen would follow the lead of Elia Kazan and turn stoolie for HUAC).

A male melodrama acknowledged by Martin Scorsese as a direct inspiration for “Raging Bull” (1980) — the sporadic boxing scenes that track the protagonist’s rise offering a clear template for what Scorsese would attempt decades later — “Body and Soul” casts Garfield as Charlie Davis, a Jewish kid who ascends, like Garfield himself, from the downtown slums to the heights of fame and fortune and, also like the actor, manages the transition with something less than aplomb. As Davis, Garfield balances a certain boyish charm with an undercurrent of menace, his adolescent defensiveness keeping his loved ones at times tragically at bay. He played a lawyer in the Polonsky-directed “Force of Evil,” a noir unusually literate even by the standards of that talky genre, in which Polonsky imbues a low-down story of numbers racketeering with a quasi-biblical moral weight. Despite Polonsky’s leftist convictions, neither “Body and Soul” nor “Force of Evil” feels like a particularly doctrinaire work. Rather than pay heed to Marxist theory, these are films that express their politics through a palpable disgust with the corruption and materialism of American society, which ends up coming off as something of a counter-meritocracy, uplifting the most spiritually rotten and destroying the rest.

Directed by journeyman John Berry, “He Ran All the Way” involves many of the principles from Garfield’s previous independent outings, including producer Bob Roberts, also the actor’s business partner, and legendary DP James Wong Howe, who also shot “Body and Soul,” with Dalton Trumbo filling in for Polonsky in the maligned leftist screenwriter role. By the time of the film’s production, Garfield had appeared before HUAC but avoided naming names, a decision that garnered him the attentions of the FBI and the ire of the right-wing press. Indeed, the film carries a strong sense of desperation, with Garfield’s Nick Robey beginning at the end of his rope and only things only becoming rougher from there. Despite its title, “He Ran All the Way” is actually a very claustrophobic affair. After running through the streets of LA in sequences that foreshadow such semi-documentary experiments in US independent film as Morris Engel’s “The Little Fugitive” (1953) and Lionel Rogosin’s “On the Bowery” (1956), the film hunkers down into something like chamber drama containment, as Robey holds hostage the almost stiflingly all-American family of a girl who falls for him, excellently played by a young Shelley Winters. It’s at times a nasty little film, with the wounded Robey lashing out at the captive family. No one comes off undamaged; the family’s kindly dad finds himself experiencing violent urges to redress such an affront to his masculinity, and even Winters’ good girl Peg learns some unsetting lessons regarding the nature of her sexual longings.

With the action thus confined to Robey’s gambits and outbursts, the movie rides and dies with Garfield’s performance. His is an unusual kind of charisma and sex appeal. Only five foot seven, he has the physique of a spark plug and craggy features. Still, there’s a certain smoothness to his movements, and even in the role of a failed thug — his character’s behavior can be compared to that of a frightened serpent — he’s still able to convey moments of almost childlike tenderness. But what’s most impressive about his performance is the degree to which he showcases our hero’s shortcomings. It’s not just an ability to be vulnerable; Garfield is unusually adept at playing weak and even kind of stupid as well. Robey might not have ever been destined for bigger and better things, but his suffering is affecting nonetheless. “He Ran All the Way” shows Garfield to be a very modern sort of performer, recalling later ethnic character stars like John Cazale, John Cassavetes, and Peter Falk, whose pathos-laced turn as an alternatively craven and pitiable gangster in Elaine May’s “Mikey and Nicky” (1976) plays kind of like a Garfield performance decades after the fact.

As surely as the seasons pass, social norms and cultural tastes turn over, and it’s this forward-looking quality of Garfield’s that adds an extra layer of tragedy to his untimely end. He might have been fatally out of place in the McCarthyite forties and fifties, but it’s hard to think of many actors of his generation who would have been quite so well fitted to Hollywood’s rebellious seventies, when the loony adherents of Garfield’s newfangled acting techniques fully took over the asylum. It’s easy to imagine him popping up in a supporting role in a Cassavetes film, and certainly Scorsese could have found ample use for the star of “Body and Soul.” And yet, watching “He Ran All the Way,” with its pervasive atmosphere of intractable doom, one gets the sense that some situations can be resolved in only one way. It’s present in the title: he ran all the way, but to where? The earth is round, but life and film noir share a particular terminus.