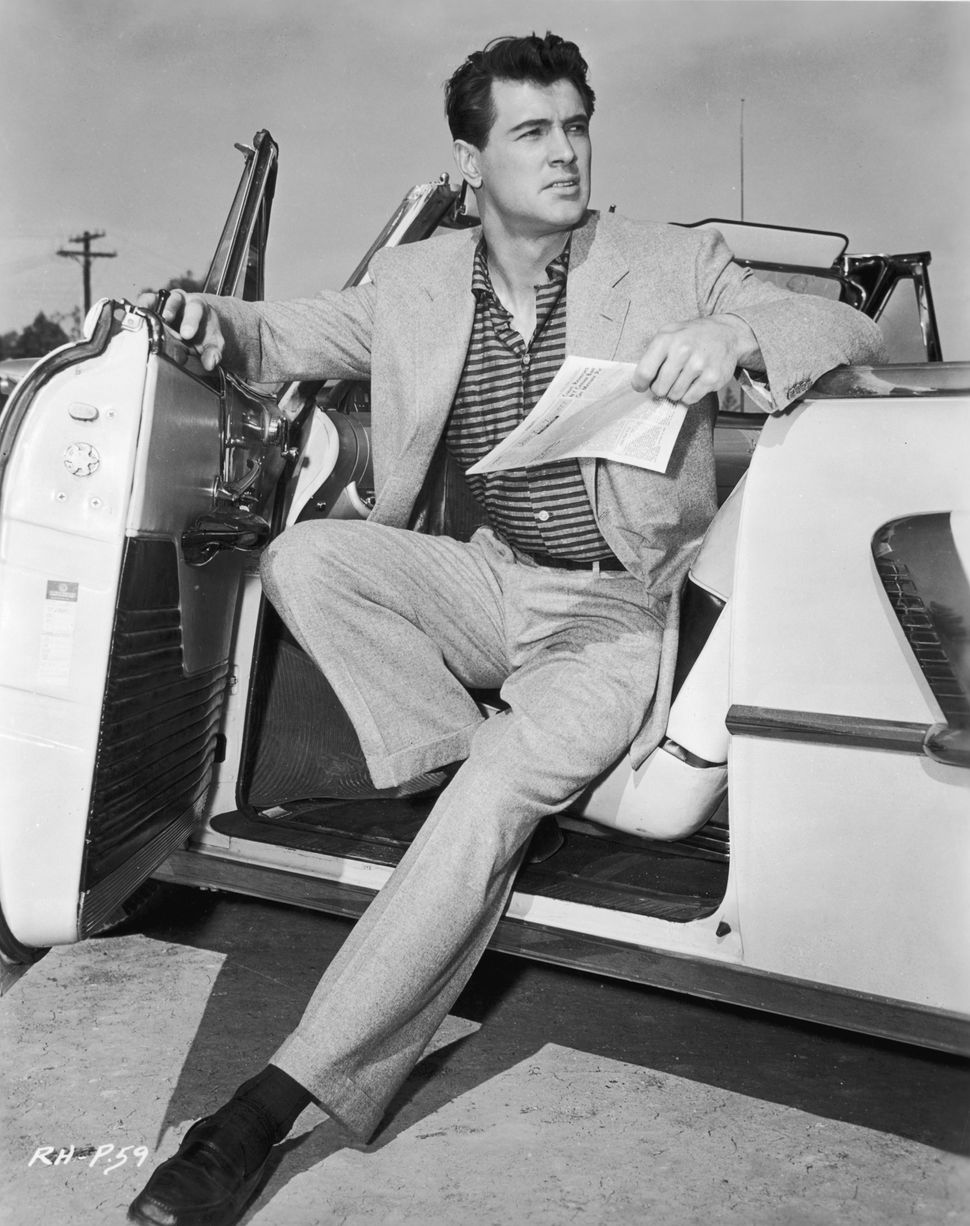 Who was the biggest male star in Hollywood in the 1950s and ‘60s? John Wayne? Too typecast in Westerns. Marlon Brando? Too weird and rebellious. James Dean? Died too young. It may be hard to remember or to imagine today, but the biggest star in Hollywood back then was a clean-cut, all-American, handsome guy named RockHudson. Hudson’s specialty was playing the leading man in romantic comedies opposite such leading ladies as Elizabeth Taylor, Doris Day, Gina Lollobrigida, and Jane Wyman. Unbeknownst to audiences at the time, however, was the fact that Hudson was not drawing upon real life in these roles. The long-hidden truth was that Rock Hudson — the icon of American male virility — was gay.

Author Mark Griffin explores Hudson’s life and legacy — and the high cost he paid for living in the closet — in his new biography, “All That Heaven Allows” (Harper). In addition to romantic comedies, Hudson also appeared often in Westerns and war movies. Later in life, Hudson enjoyed a second career as a TV star, alongside Susan St. James in the popular detective show “McMillan & Wife” and for a short time, in the year leading up to his death due to complications of AIDS in 1985, in the prime-time soap opera “Dynasty.”

Hudson was as American as apple pie. Born in Winnetka, Ill., to an auto mechanic father of German and Swiss ancestry and a telephone operator mother of Anglo-Irish descent, he sang in the school glee club, delivered newspapers, and served in the U.S. Navy before moving to Los Angeles to try his hand at acting. Whether or not he was a good or great actor is debatable, but for the better part of a decade, he was certainly bankable and his name above the credits pretty much insured a hit. Hudson was able to ride high well into the 1960s, but like everything else that was clean and square and bore the moldy scent of the 1950s, by the end of that tumultuous decade his star began to fade. It was goodbye Rock Hudson, hello Paul Newman, Warren Beatty, Jack Nicholson, and Robert Redford. (Dustin Hoffman, too.)

Hudson stuck around, though, and continued making movies. In 1967, he co-starred in a World War II film called “Tobruk.” Based loosely upon an actual 1942 mission known as “Operation Agreement,” the film recounted the story of an Allied commando squadron, comprised of German Jews masquerading as Nazis and British soldiers pretending to be prisoners of war, that set out for the port city of Tobruk, in eastern Libya near the Egyptian border, with the intention of destroying German Field Marshal Erwin Rommel’s fuel supply. In the film, Hudson plays the Canadian Major Donald Craig, who comes up with the plan after being liberated from a Vichy prison camp by the German-Jewish Captain Kurt Bergman, played by the very not-Jewish George Peppard, who garnered most of the critical acclaim along with that accorded to director Arthur Hiller, whose Jewish parents had emigrated from Poland to Western Canada in 1912. In one scene, Hudson, as Major Craig, asks Peppard/Bergman if he and his men will return after the war to “Palestine,” to which Peppard sharply retorts by saying “Israel” – an anachronistic comment, since it would be several years hence before Britain would surrender its mandate over the territory to the United Nations, in order for that universal body to offer the 1947 Partition Plan leading to the creation of the State of Israel.

Hudson’s next cinematic connection to Israel came in 1983 when he appeared in “The Ambassador,” a movie produced by Menahem Golan and Yoran Globus and filmed on location in Israel. This may well have marked the nadir of Hudson’s film career. Originally based on Elmore Leonard’s suspense novel, “Fifty-Two Pickup,” the film swapped out Detroit for Tel Aviv. Leonard’s protagonist, manufacturing executive Harry Mitchell, was transformed into Peter Hacker, the U.S. Ambassador to Israel. The plot’s intrigue included sexual blackmail, political blackmail, and back-channel ties to the P.L.O. At a time when Hudson’s career was tanking, he accepted a subsidiary role as a security adviser to the ambassador, a role that Telly Savalas had backed out of at the last minute. The move saw Hudson playing second fiddle to Robert Mitchum in the title role and Ellen Burstyn as the ambassador’s wife. As if not playing the lead role wasn’t enough of a comedown for the former star, the conditions to which he was subjected on location were even worse. Mitchell says that once Hudson arrived on location in Israel, he sank into “a very great depression.”

“Everything seemed wrong,” writes Mitchell. “Gone were the days when Rock Hudson occupied the plushest bungalow on the Universal lot. He had now been relegated to a fly-infested trailer in the Negev Desert. Although he didn’t complain, it was obvious that he was miserable. The heat was unbearable, the food wretched, the movie subpar.” To add insult to injury, Robert Mitchum snubbed him. “[N]othing could bring Hudson out of his depressive funk. Even when the entire company surprised Rock with a cake in honor of his fifty-eighth birthday, it required some serious effort on his part to look overjoyed…. Try as he might, he couldn’t shake the feeling that his movie career —- which meant more to him than anything else – was essentially over.”

Way back in 1961, Hudson crossed paths with a 29-year-old up-and-comer named Joel Grey while the two were filming “Come September,” a rom-com co-starring Sandra Dee and Bobby Darin. Grey was born Joel Katz, the son of famous Jewish actor, comedian, and musician Mickey Katz, and would go on to become best known as the original Tony Award-winning Master of Ceremonies in the stage musical “Cabaret” and later as an Oscar-winner for the same role in the film version starring Liza Minnelli. (This year, Grey has polished his resume with a triumphant, late-career role as director of “Fidler afn dakh,” the hit Yiddish version of “Fiddler on the Roof” currently at the National Yiddish Theatre – Folksbiene, soon moving to off-Broadway.)

Grey played one of Bobby Darin’s sidekicks in the movie. He told Griffin that in spite of an immediate rapport, Grey – who was also closeted at the time – and Hudson never acknowledged to each other what lay beneath the surface. “What’s very interesting, looking back on it now, is that we went out to dinner without ever discussing anything having to with what we knew about each other,” says Grey, who finally came out publicly in 2015. “There was this unspoken familiarity and trust and amusement that bonded us…. I really felt for him because I knew he was living that double life that was so scary at that time…. I always had great sympathy and empathy for him but again, none of this was ever spoken aloud. That was just the way it was.”