On Disney Channel’s ‘Andi Mack,’ Yet Another Jewish Story 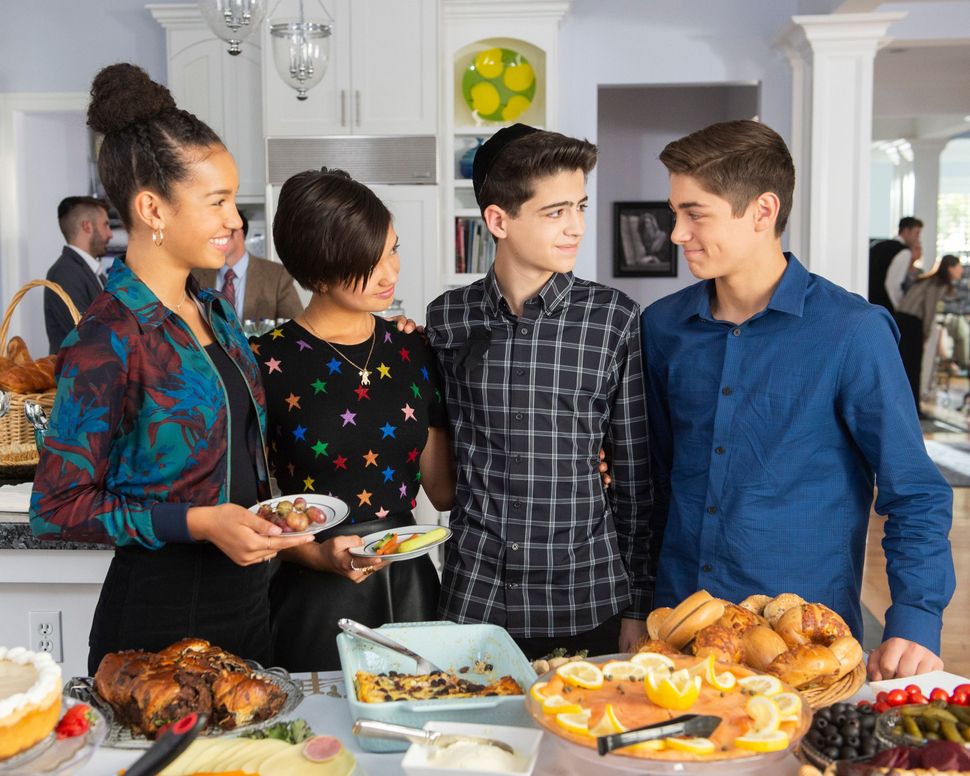 “Andi Mack” was not on TV last Friday, so my evening was not as enjoyable as it usually was. Almost a year ago, I wrote about how I am a lover of shows on Disney Channel. Some people might find this odd, as I am a childless, middle-aged adult who is not a teacher. However, I have also noted that “Andi Mack” is probably the most sophisticated show on the channel. There are storylines concerning both children and adults, and lessons that people can learn at any time during life. And this is the second time that the show used a major ritual of the Jewish faith to communicate life lessons.

In 2018, the show’s only Jewish character, Cyrus Goodman, celebrated his bar mitzvah. There were some reveals on that episode, including the moment when Cyrus came out to his best friends Andi and Buffy (a gay character on Disney Channel was another milestone). On the episode first broadcast Friday, February 8, and titled “One in a Minyan,” Cyrus’s family held a shiva after the death of his beloved Bubbe Rose. The concept of paying a shiva call was foreign to Andi, Buffy and Jonah. When Jonah first entered the home, he asked where Bubbe Rose was, as he wanted to pay respects. Cyrus replied, “Well, we just buried her, so she’s probably not coming.”

This episode is about friends coming together and showing love and support. It did not have to take place at a shiva, but the fact that it did provided all the elements for sentimentality and light-hearted humor. True to the ritual, there was a minyan to say Kaddish, covered mirrors and an abundance of food. Andi and Buffy recalled how Bubbe Rose tried to teach them Yiddish. When the rabbi approached Cyrus about joining the minyan, he asked Jonah to join in, too. (“You can pray, but you don’t count,” Cyrus explained to his friend.)

Comedic chaos ensued when Andi’s father, Bowie, showed up with what he said was a homemade kugel (initially he pronounced it “koo-JEL”). Seems matriarch Aunt Ruth had already made a kugel – and it contained raisins, which Bowie’s lacked. When Cyrus’s dad told Bowie that him making a kugel was a shande, Andi replied, “It’s delicious”; then Cyrus broke the news that shande means “disgrace.” (Toward the end of the episode, the gang’s friend TJ showed up with a chhhhhallah.)

Outside, Andi, Buffy and Cyrus toasted to Bubbe Rose, and Cyrus expressed regret at never having told his grandmother that he is gay. He decided that he would tell Jonah — who last season was his secret crush — but he found his friend struggling with a panic attack. That lovely, lighthearted humor factored into this scene. Cyrus assured a scared Jonah that even though it feels like he is going to die, he won’t, and if he does, “we’re all set up for shiva.” The conversation that followed as Cyrus continued to calm Jonah showed viewers that the loving bond between the boys was strengthening.

Since the timing was not right, Cyrus did not come out to Jonah. Later, he informed Jonah of the food choices, listing the table’s contents as if he were a shiva waiter: “That’s your classic bagel and lox, that’s gefilte fish… and I’m gay.” Jonah smiled and said: “Yeah? Okay, cool.” The four friends all stood in front of the table, their arms around one another.

The final lesson of the episode came when Andi mentioned a disagreement she had with her grandmother, Cece. Cyrus reminded her that even though Cece might not be perfect, what’s important is that she is still here. Later, Andi lovingly hugged Cece, saying, “I still have my bubbe.”

So once again, “Andi Mack” has used Judaism to show the concept of people coming together to share, support and love – especially in those teenage years that can be such difficult times. No doubt there were many viewers who had no idea what a shiva was, and this was so authentic and so accurate that I felt like I was mourning Bubbe Rose right along with them and getting ready to partake in the delicious food – even the gefilte fish.

On Disney Channel’s ‘Andi Mack,’ Yet Another Jewish Story