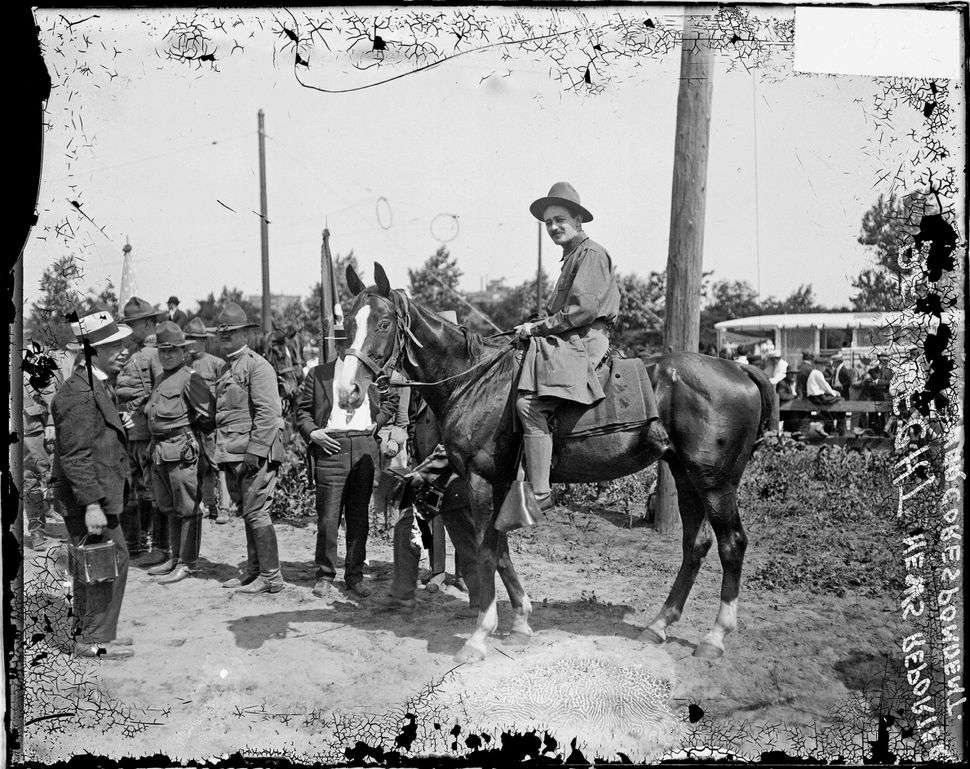 In 1947 Mickey Cohen, the Los Angeles crime boss, paid a visit to Ben Hecht, the journalist, screenwriter and propagandist for a Jewish state, to ask how he might best support Jews in Palestine. When the mobster and his henchmen emerged from a bulletproof limousine, keeping fedoras on for the summit, the screenwriter of “Scarface” recalled, “They acted like people I made up.”

But then, doesn’t everyone who watches 20th century movies to learn how Americans behave act like people Hecht made up? Even if they don’t remember his name, they remember Hecht’s movies.

The son of immigrants from Belarus and the Ukraine, he was born in New York, self-made in Chicago and minted in Hollywood where he won one original screenplay Oscar for “Underworld” (1927) and another for “Notorious” (1946). “He invented 80 per cent of what is used in Hollywood today,” said Jean-Luc Godard, the French filmmaker quoted in the first paragraph of Adina Hoffman’s splendid monograph, “Ben Hecht: Fighting Words, Moving Pictures,” the latest title in Yale’s “Jewish Lives” series.

At 232 pages, it is a trim book, a fraction the size of Hecht’s autobiography, “A Child of the Century.” As Norman Mailer cracked, Hecht was “never a writer to tell the truth when a concoction could put life in his prose.” Hoffman brings objectivity and an amused skepticism to her subject.

“Hecht made a point of grandly asserting that he ‘became a Jew in 1939’, when he began to ‘look on the world with Jewish eyes,” writes Hoffman, who then proceeds to call him out on this concoction. “Here the question of what makes a ‘Jewish life’ seems especially fraught, since he insisted on defining his Jewishness in the narrowest terms…as if Germany’s invasion of Poland had somehow altered his DNA.” For the author, “Being Jewish was fundamental to being Ben Hecht.”

In her opening chapter, Hoffman mulls over the present-day invisibility of the journalist’s journalist and novelist’s novelist of the 1920s, the screenwriter’s screenwriter of the 1930s and 1940s and the propagandist of 1939-1948. She thinks it likely that his “discipline-jumping between art and entertainment, highbrow and low, made him suspect in literary quarters, and that suspicion followed him past death.”

H.L. Mencken, his occasional editor and admirer, delivered a cruel verdict on his skills when he said Hecht “had a considerable talent, but there was always something cheap and flashy about him, so I was not surprised when he gravitated to the movies.” Then again, Mencken was not what one would call a philo-Semite. Hoffman allows that “Jewish politics, too, also played a part in the current amnesia surrounding Hecht,“who accused America’s most powerful Jews and FDR of gross dereliction during World War II and championed the Irgun in its fight for a Jewish state.

As Hoffman tells it, whatever his contradictions as an artist and shortcomings as a man, Hecht is exciting company. The book begins with his Bar Mitzvah and ends at his dotage, with Shakespeare as a decisive figure. The Bar Mitzvah gift he received from his parents was four crates of “grown-up” books — including Dickens, Shakespeare, and Twain, in which he immersed himself as if in a warm bath. At his death Hecht was absorbed with “Shylock, My Brother,” an unfinished treatise/memoir that makes the case that the Bard’s moneylender was “one of the few heroic Jews in classical literature.”

Hecht lasted three days at the University of Wisconsin before boarding a train to Chicago in 1910. It was love at first sight. He called it “the first city of my manhood.” The sea of faces — including those belonging to friends Carl Sandburg, Sherwood Anderson and Theodore Dreiser — galvanized him. He and his writing partner Charles MacArthur would memorialize — some say mythologize — the smoke and wisecrack-filled Chicago newsrooms where the two worked as cub reporters in their 1928 play, “The Front Page,” made as a 1931 film and remade, hilariously, in 1941 as “His Girl Friday.”

Hecht’s Chicago years were foundational. During the 1910s the restless Hecht was newspaperman by day, man of letters by night. His first published fiction appeared in a 1915 issue of Margaret Anderson’s Little Review, the house organ of American literary modernism. He also wrote frequently for Mencken’s Smart Set, for which the debt-strapped author, a lifelong spendthrift, got paid. Journalism pumped his muscles, literature stretched them.

Hecht’s first novel, the semi-autobiographical “Erik Dorn,” arrived in 1921. In Hoffman’s nice description, “the book contains at least a dash of …every possible…seasoning he could grab off the literary spice rack,” including “expressionistic” and “bodice-ripping.” Decades later Nelson Algren observed, that no other American had ever “written a novel this good yet this bad.”

Hecht’s most influential writing of the 1920s was his Daily News column, “A Thousand and One Afternoons in Chicago.” He was a Middle-American Scheherazade who, story by story, created a composite portrait of a cosmopolis, forerunner of city columnists Mike Royko, Jimmy Breslin, and Steve Lopez. Then Hecht moved to New York and wrote “The Front Page,” among other plays.

Hollywood did not merely beckon, it sent a telegram. The actual sender was Herman Mankiewicz (later the writer of the screenplay for “Citizen Kane”), proffering $300 a week ($4,000 in 2018 dollars) to write for Paramount. For “Underworld,” at atmospheric gangster movie directed by Joseph von Sternberg, Hecht won the first Oscar for original screenplay, thus legitimizing the gangster saga. And his script for “Scarface” (1931) was even better. While Hecht routinely decried Hollywood as “an outhouse on the Parnassus,” he took its cash. At his earning peak he made as much as $125,000 a month — and that was during the nadir of the Depression. His fear was that writing screenplays cheapened his talents.

“The irony was that Hecht was among the very worst judges of his own talents,” Hoffman says. She makes the case that his novels and stories are “trifling period pieces,” and his movies among “the most enduring ever made.” This, even though she admits that ascribing credit to him for a film’s imaginative essence is a tenuous enterprise. He had a hand in at least a dozen classics, including “Design for Living,” “Topaze,” “Twentieth Century,” “Wuthering Heights” and “Gunga Din.” Besides siring the gangster movie, he could claim parentage of the screwball comedy, the newspaper film and the action movie. “Screenwriting was Hecht’s calling,” contends Hoffman, “whether he liked it or not.”

For all Hecht’s contradictory declamations on art, life and Yiddishkeit, for Hoffman and her readers he is an endlessly fascinating specimen of the agnostic Jew who in the face of Hitlerism had a conversion experience. While many of his co-religionists espoused the fight against the nationalists during the Spanish Civil War, Hecht railed against German Fascists out to exterminate the Jews. Was his fervor, in part, atonement for an affair with a non-Jew and a reaffirmation to his faith and his Jewish wife, Rose?

Hoffman’s account of Hecht’s propaganda decade, roughly 1937 to 1947, is riveting. Where did the “porkchop eating, Christmas-tree-lighting Hecht” find the time and energy to write some of his best screenplays (see “Foreign Correspondent,” “Notorious”) write anti-Nazi screeds, inveigh against appeasers like Joe Kennedy, mount pro-Jewish pageants at Madison Square Garden and the Holywood Bowl, and devote himself to the cause of Zionism?

Hoffman juggles Hecht’s contradictions deftly as he juggled his many commitments. I closed the book thinking that his life would make one hell of a Hecht movie.