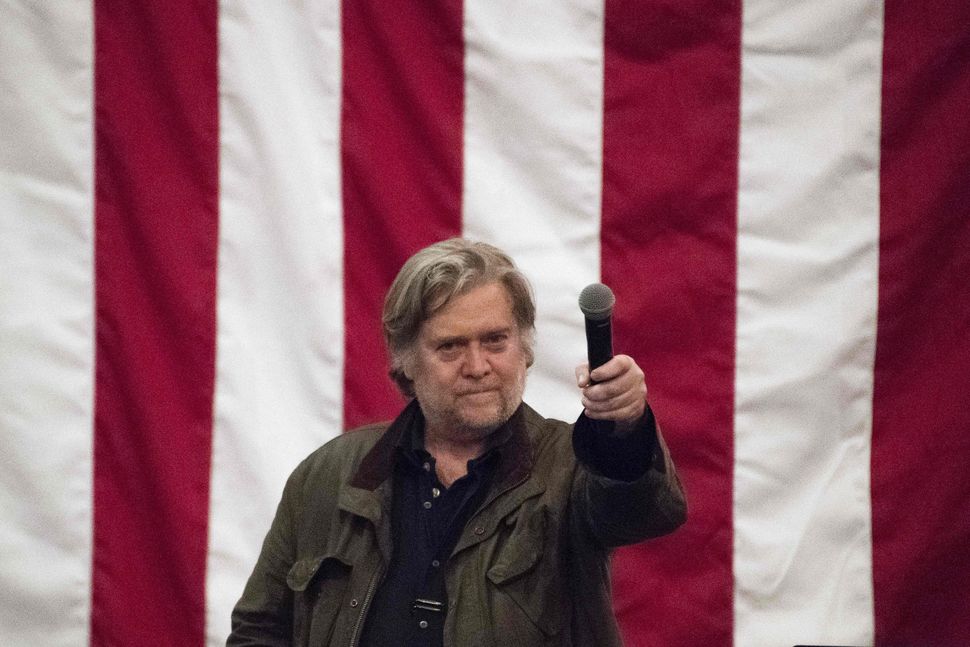 Stephen K. Bannon lost his job in the White House more than a year and a half ago, departing in an atmosphere so rancorous that his erstwhile champion, Donald Trump, slurred him on Twitter as “Sloppy Steve Bannon.”)

Then Bannon’s full-throated support for Roy Moore’s campaign to represent Alabama in the U.S. Senate ended in a crushing loss. And his subsequent work for Republican candidates in the 2018 midterm was also for naught, as Democrats picked up a historic number of seats in the House and in state legislatures across the country.

So even though it may seem logical to dismiss the disheveled master of political spin as a losing has-been, don’t.

Like his mercurial political patron in the Oval Office, Bannon flicks away defeats and denunciations as if they were raindrops on a nylon flak jacket. The “populist” doesn’t care if he doesn’t have the people on his side. His goal is to decimate the political order. And by not holding him accountable for his nihilistic actions, we allow him to continue.

The scope and depth of Bannon’s manipulations are laid bare in the new documentary “The Brink,” which opened nationwide last weekend. The cinema verité film takes a subtle approach to an unsubtle subject, allowing Bannon’s own words and behaviors to reveal his hypocrisy and expose the danger he poses to liberal democracy.

I’m not here to officially review “The Brink,” because the director, Alison Klayman, is a very close family friend. But I do believe that it provides yet another reason why this man must be taken seriously — not as an intellect, nor as an ill-mannered buffoon, but as emblematic of the shallow, shameless characters that pepper the media landscape and drive the worldwide political conversation in this Trumpian era.

Klayman was granted unparalleled access to Bannon for more than a year, and we see him not only meddling in American politics; he’s also building what he calls the Movement to massacre the European status quo.

The Movement’s goal is to meld Europe’s diverse nationalist and populist parties into a broad alliance that will undo the European Union, beginning with EU elections next month. “Down that road lie economic and political chaos, the further weakening of America’s key allies, and a potential slide toward illiberal democracy in several European countries,” wrote Trudy Rubin, The Philadelphia Inquirer’s insightful foreign affairs columnist.

The Movement claims to be in the vanguard of a popular revolt, representing Europe’s proverbial white, Christian “forgotten man,” but somehow Bannon and his entourage are able to fly private planes, stay in luxury hotels, ride in fancy cars, and spend lots of money without transparency and with impunity.

At one point, Klayman asks him to say into the camera where they are at that moment: “We’re in the private Van Nuys airport,” he answers. Then, with impeccable timing, he adds: “This is the populist headquarters.”

Oh, but he doesn’t care.

Yet too often, my colleagues in the media give him an unmediated platform to air his outrageous views without challenge.

“I think it’s important to cover Bannon because he is politically active, he is engaging with far-right leaders and parties around the world, he is running a 501(c)4 trying to influence American elections, he is in close touch with Republicans in government and party leadership, and he is funded by billionaires to further these activities,” Klayman told me in an email from Copenhagen, where the film had its European premiere.

“To me, the stories that need to be done less are ‘far-ranging interviews’ that treat him as some kind of profound visionary and let him say whatever’s on his mind unchecked and un-contextualized,” she said. Instead, the media needs “to look at where they’re spending their money, time, and energy, and evaluate what they say with that in mind.”

Not only does Bannon brush off questions about his sources of funding — though the film implies that millions come from the fugitive and shady Chinese billionaire Miles Kwok — he also takes no responsibility for the hatred and xenophobia that his words unleash. One of the most telling moments in “The Brink” captures an increasingly aggressive interview by Paul Lewis of The Guardian, who presses Bannon on his use of anti-Semitic tropes.

Bannon, the former Goldman Sachs banker, insists that there’s nothing nefarious about using “globalist” and “George Soros” in speaking of a “Davos elite” who are trying to run the world.

“Bannon wants everyone to think of him as a deep political thinker and a modern intellectual,” Zack Beauchamp wrote in Vox last year. “But little that he’s done, either inside the White House or outside, suggests he deserves that status. We shouldn’t grant it to him.”

Instead, as “The Brink” brings to light, Bannon calls upon the worst in human nature to dismantle the geo-political order without giving real thought to what will replace it and who will truly be harmed. He can at times be charming and engaging, but make no mistake: This is a man who, in the film’s opening sequence, rhapsodizes about the precise engineering of one of the most evil thing humans have ever created, the Birkenau extermination camp.

Bannon knows what wins elections — “hate is a motivator, anger is a motivator.” He used that tactic when he engineered Trump’s victory in 2016. He’s using it now in Europe. And he’ll use it again here in 2020. As Bannon knows, what enables hate is indifference. We’ve been warned.

Jane Eisner is the Forward’s writer-at-large and the Koeppel Fellow in Journalism at Wesleyan University. Contact her at [email protected]