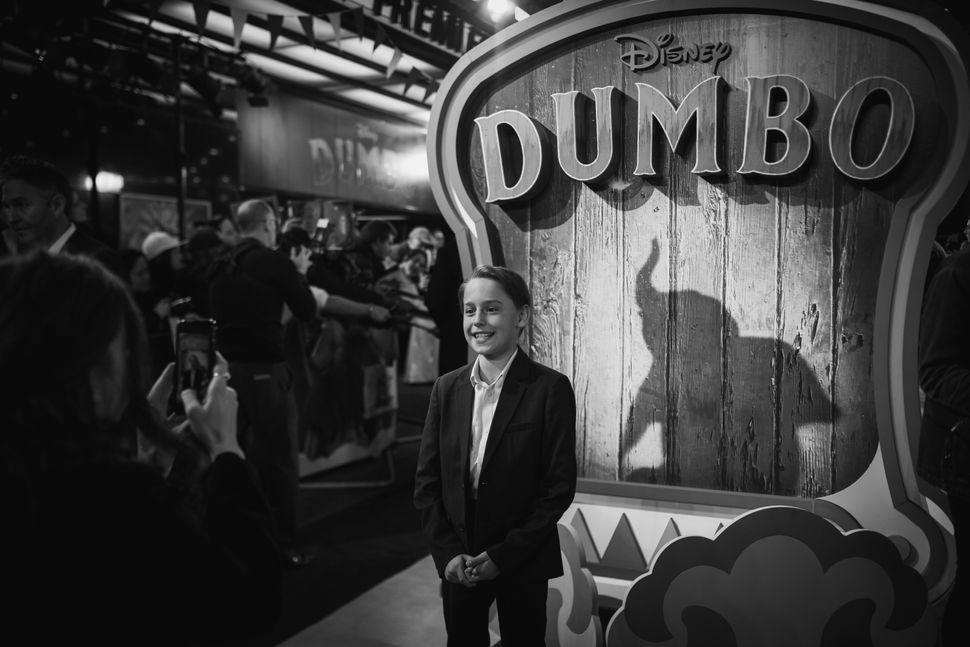 The European premiere of Dumbo Image by Getty Images

Tim Burton’s remake for Disney of “Dumbo” about an elephant whose oversized ears enable him to fly, has received mixed reviews. Some filmgoers prefer the classic 1941 version, also from Disney. Yet indisputably, the story for both originated in a book published in 1939 by Helen Aberson (1907-1999), a Syracuse-born writer of Ukrainian Jewish origin.

After paying a mere 1000 dollars as flat fee for all rights, Disney has since reaped untold profits, which in merchandising alone must add up to hundreds of millions of dollars. All Disney theme parks, including Shanghai Disneyland, boast a Dumbo the Flying Elephant ride and sell Dumbo chotchkes.

Helen Aberson, a cigar maker’s daughter, never imagined such rewards. She just enjoyed penning children’s stories inspired by her life and family, the rest of which remain unpublished. One was “Sim, the Seal,” named after her brother Sim, a Syracuse druggist.

Aberson’s original story explored emotions linked to be being physically different from others. Her tale of exceptionalism was well timed for the era of Fascist takeover in Europe, which was accompanied by lethal caricatures of Jews. Links between Jews and elephants, while not explicit in Aberson’s text, were also part of the times. Harley Erdman’s “Staging the Jew” cites the Jewish actor David Warfield (born Wohlfelt) who said that when he was asked to play a Jewish role, he added so much putty to his face that onstage, his “nose began to elongate, until it was like the trunk of a baby elephant — lengthy beyond my wildest dreams of what a Jew’s nose should be.”

In those days, Jews were mocked even by other Jews, if their noses were too prominent. Cécile Kahn Brunschvicg, the wife of the French philosopher Léon Brunschvicg, was known as “la trompe” (elephant’s trunk) because of her proboscis, as her friend the sociologist Maurice Halbwachs admitted. Jews were even linked to elephants in literature. One year before Aberson’s book appeared, “The Duchess and the Jeweller,” (1938) a story by Virginia Woolf, offered this description of a jeweler:

“His nose, which was long and flexible, like an elephant’s trunk, seemed to say by its curious quiver at the nostrils (but it seemed as if the whole nose quivered, not only the nostrils) that he was not satisfied yet; still smelt something under the ground a little further off.”

The Disney studio could also be overly conscious of Jewish noses, according to the American Jewish animator David Hilberman, who worked there. The biographer Neal Gabler quotes Hilberman that Zach Schwartz, a fellow Disney animator, was fired at a time when employees attempted to unionize: “[Schwartz] wasn’t a troublemaker, he was a good artist and didn’t give anybody a hard time. What he did was have was the last name of Schwartz and a big nose.”

Helen Aberson had no clue about this seething nasal-related atmosphere when she was told that Disney wanted to buy the rights for her book. “Dumbo” was first brought to Disney’s attention by Herman “Kay” Kamen (born Kominetzky, of Russian Jewish origin), a marketing whiz. By the early 1930s, Kamen’s merchandizing efforts led to Mickey Mouse sweatshirts, underwear, and watches outgrossing the studio’s films. Kamen also pooh-poohed those who claimed to see occasional anti-Semitism in Disney’s films and business practices, asserting that Disney’s New York office had “more Jews than the Book of Leviticus.”

On the artistic side, echoes in “Dumbo” of Hans Christian Andersen’s Ugly Duckling and Munro Leaf’s “Story of Ferdinand” (1936) about a peace-loving bull, charmed the animators. They were led by Otto Englander, a Sephardic Jew born in Bosnia and Herzegovina, who served as story director on “Dumbo.” Englander “responded to it personally and was eager to go, for the creative opportunity that it afforded,” as Didier Ghez’s “Walt’s People” points out. An Eastern European Jewish immigrant, Englander may have shared some of the vulnerabilities in Aberson’s character of the little elephant, so unlike those around him.

In an early draft of the film supervised by Englander, Dumbo is psychologically scarred by his difference. The elephant is taken to see Dr. I. Hoot, an owl psychiatrist, depicted in Robert Feild’s “Art of Walt Disney” (1942) In a later draft, this doctor was renamed Professor Hoot Owl, a psychiatrist and notary public whose advice was limited to: “If you want to fly, go ahead and fly! Ten dollars, please.” The Freudian satire here may have been considered a bit much for Disney audiences, as it was dropped from the final film.

The psychiatrist was the studio’s initial replacement for Aberson’s original concept, in which a robin named Red takes Dumbo to see Wise One, an owl, to find out the possibility of his escaping the circus. The owl, in the role of a counseling rabbi or chochem, tells the pachyderm that his ears might function as wings.

These and other changes expanded a humble tale originally published in a novelty format, in which readers scrolled past framed images to experience the narrative. Aberson was unsettled by a trip to Hollywood to meet and offer advice to Disney. She was little heeded. Aberson’s West Coast experience was the opposite of that of the Australian-born P. L. Travers, who two decades later would tyrannize Disney when he sought the rights to her Mary Poppins stories, as recounted in the film “Saving Mr. Banks” (2013)

Aberson lacked the natural assertiveness of Travers, and was incapable of bullying Disney, even had that approach been effective, which is doubtful. At an earlier, less prosperous era for Disney, with his studio traumatized by an worker’s strike which interrupted production on “Dumbo,” Uncle Walt would scarcely have reacted well to a forceful chaleria, even had Aberson resembled one.

As it was, she returned to the East Coast so deeply depressed by her experiences with Disney that she preferred to avoid focusing on it for the rest of her life. What turned her off so decisively, beyond seeing her work altered? Did she possibly meet Ben Sharpsteen, the supervising director of “Dumbo?” Neal Gabler writes:

“An animator named Art Davis, who had interviewed at the studio but was not hired, said that Sharpsteen, despite having a name that might be mistaken for Jewish, was actually a vicious anti-Semite who did not knowingly hire Jews and who reviled the ones who had been hired, which was how the studio got its reputation for hostility towards Jews.”

Had a brush with Sharpsteen upset Aberson? For whatever reason, she considered Disney’s omission of her name from future reprints of the “Dumbo” book as a personal failure. She was so discouraged that she did not even bother to renew her copyright on the original book in 1968, when it expired. As a result, she and her family never had legal basis for any claim against Disney. And expecting a voluntary expression of gratitude to a creative individual who invented a story that charmed generations would be too much to expect from the all-powerful Disney Company, then as now. So Disney obliterated the Jewish author of “Dumbo,” turning her into an anonymous contributor to The Mouse Factory.