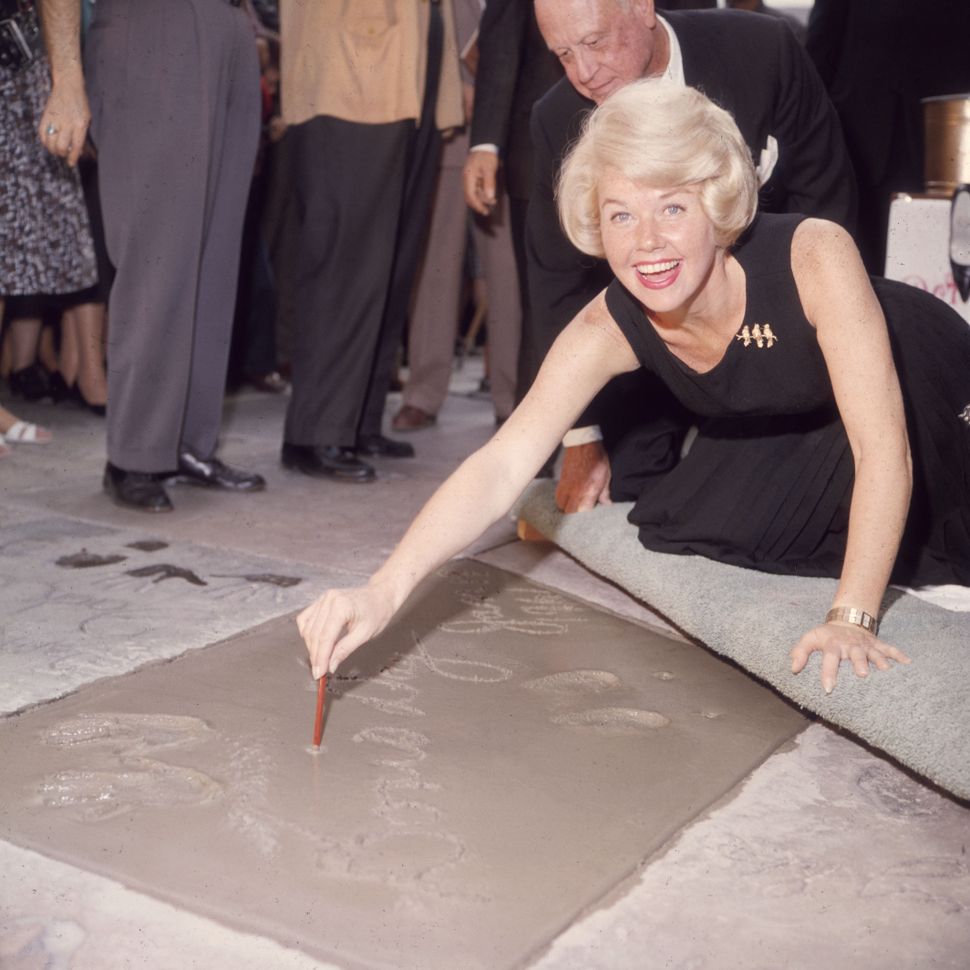 She was the iconic, American girl-next-door. She was wholesome, blonde, perky, Midwestern – a bubbly cheerleader who liked hunky guys. She was white bread with mayonnaise, with perhaps a frisky dollop of mustard. Singer and actress Doris Day – who died on May 13 at age 97 – was a lot of things to a lot of people. One thing she definitely was not was Jewish. But her life had many Jewish stories to tell, beginning with her name.

Doris Mary Ann Kappelhoff was born in Cincinnati, Ohio, in 1922. All of her grandparents had immigrated from Germany. Her first big break came in 1940, when she was hired as vocalist by swing-era bandleader Barney Rapp, who led a regional orchestra. Rapp had Doris Kappelhof change her name to Doris Day, telling her that Kappelhof sounded too Jewish. Rapp himself had changed his name from Rappaport to Rapp, presumably for the same reason.

By 1945, Day scored her first number-one hit, “Sentimental Journey,” recorded with Les Brown and His Band of Renown. The lyrics to “Sentimental Journey” were written by Bud Green, born Moses David Green in Austria before his family brought the infant Buddy to the U.S. and settled in Harlem. (Among the prominent Jewish artists who later recorded versions of the song are the late Amy Winehouse and Bob Dylan.)

Day’s success as a recording artist won her the attention of Bob Hope, who often had her as a guest on his TV variety program, “The Pepsodent Show,” starting in 1946. Hope introduced Day to talent agent Al Levy. While she didn’t like him and they didn’t work together for long, it was Levy who saw beyond the vocalist and envisioned Doris Day as a movie star. After a brief fling between the two turned ugly, Levy’s partner Martin Melcher took over, both as agent and as paramour.

Marty Melcher had begun life as a nice Jewish boy from small-town North Adams, Mass. When Day met him, he was tour manager for the Andrews Sisters – and the husband of one of them. Day and Melcher clicked, however, and the latter soon divorced Patty Andrews in order to marry his client, Doris Day. A lapsed Roman Catholic, Day had been introduced to Christian Science by her second husband, saxophonist George Weidler. Soon after getting together with Day, Melcher became a serious adherent. This did nothing to allay Alma Kappelhoff – Day’s mother – from spouting “all the archetypal prejudices about Jews only being interested in money and swindling,” according to Day’s biographer, David Bret. (Bret also portrays Day’s father as an anti-Semite: “Doris recalls with horror how her father would refer to the Jews as ‘kikes’ or ‘sheenies’….”) Day’s mother declined to attend their wedding.

Day recorded many duets in the 1940s with the likes of Frank Sinatra, Johnnie Ray, Donald O’Connor and Dinah Shore. She teamed with Buddy Clark in 1947. Clark – born Samuel Goldberg – was just coming off the success of a big hit with the song, “Linda,” which was written by Jack Lawrence a few years earlier about his attorney’s baby girl. The attorney was Lee Eastman (born Leopold Vail Epstein), and the girl grew up to be known around the world as Linda McCartney. Clark and Day scored a major hit with “Love Somebody,” selling a million copies and topping the pop charts.

At a Hollywood party, Day sang the song “Embraceable You.” Among the crowd was the Hollywood songwriting team of Jule Styne and Sammy Cahn. Styne and Cahn recommended her to director Michael Curtiz for a role in “Romance on the High Seas” (1948). Day got the part without any previous acting experience. Curtiz explained that he wanted someone who looked like “the all-American girl.” And thus was launched Day’s acting career, which would result in her being one of the biggest movie stars of all time.

Getting paired with – and getting along with — Michael Curtiz proved fortuitous. While he is widely forgotten today, Curtiz — born Manó Kaminer to a Jewish family in Budapest in 1886 – was one of the most prolific and celebrated Hollywood directors of the mid-20th century, his filmography having included “The Charge of the Light Brigade,” “Yankee Doodle Dandy,” and a little Humphrey Bogart thing called “Casablanca.” Day’s other work with Curtiz included her portrayal of the wife of Tin Pan Alley songwriter Gus Kahn in “I’ll See You in My Dreams,” a 1951 film which broke box-office records. Kahn – portrayed by Danny Thomas in the film — was born in Koblenz, Germany, in 1886, to a Jewish family that immigrated to the U.S. and settled in Chicago in 1890. Kahn wrote such standards as “It Had to Be You,” “Makin’ Whoopee,” “Ain’t We Got Fun?” and “Yes Sir, That’s My Baby.” Day recorded a version of Kahn’s “My Buddy” in tribute to Buddy Clark on her 2011 album, “My Heart.”

Then there is the issue of Day’s signature song, “Whatever Will Be, Will Be (Que Sera, Sera),” which was the theme song of her eponymous TV sitcom, which ran from 1968 to 1973. The title and the sentiment behind it can be translated into contemporary American-Jewish lingo as, “It is what it is.” That phrase itself dates back to the Torah, in Exodus 3:14, wherein God tells Moses that His name is “Ehyeh asher ehyeh,” rendered approximately as “I am what I am” — which greatly pleased fans of the cartoon character Popeye the Sailor. Incidentally, “Que Sera, Sera” was cowritten by Jay Livingston (born Jacob Harold Levison) and Ray Evans (born Raymond Bernard Evans to a Jewish family in Salamanca, N.Y.).

Modern-day movie history may have been written very differently had Day not turned down the role of Mrs. Robinson in the groundbreaking 1967 film “The Graduate.” Day opposed the film, saying it “offended my sense of values.” The role of the cougar mom who tries to seduce 21-year-old Benjamin Braddock, played by Dustin Hoffman, instead went to Anne Bancroft, and the rest is cinema history.