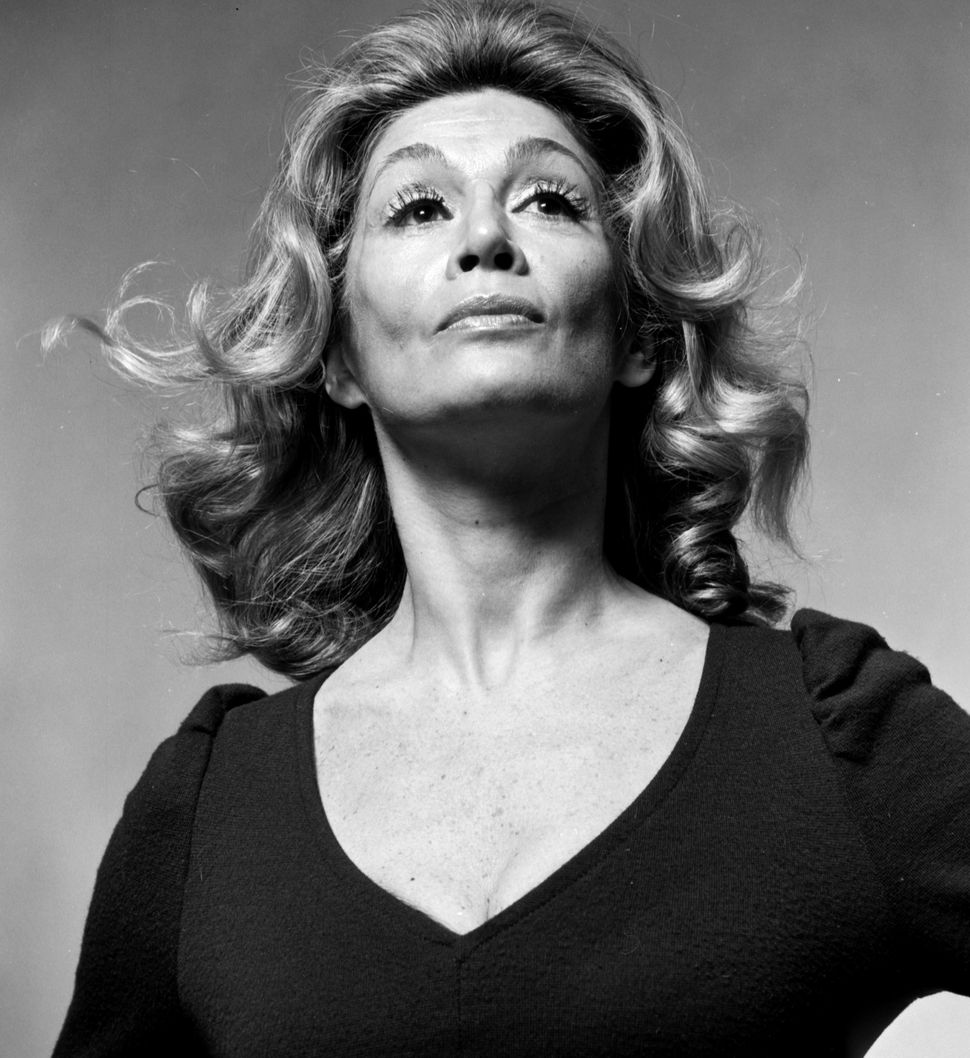 The American Jewish actress Sylvia Miles, who died on June 12 at age 94, proved that Jewish truth telling can simultaneously make and break a performance career. Miles’ devotion to verisimilitude was such that even fellow thespians were deceived by her artistry. After seeing John Schlesinger’s “Midnight Cowboy” (1969) one of her two Oscar-nominated performances, the acclaimed tragedian Maureen Stapleton reportedly told a colleague, “Isn’t that amazing? They went out and found a hooker and put her in this movie!” only to be informed: “That’s not a hooker, that’s Sylvia Miles! She’s been around off-Broadway for years.”

Indeed she had. Born to Bella Feldman Scheinwald and Reuben Scheinwald, a Greenwich Village furniture maker, Miles debuted with Zero Mostel Off-Broadway in 1954 in Leonard Kantor’s adaptation of “A Stone For Danny Fisher” a novel by Harold Robbins (born Rubin) about a Jewish family in the Great Depression, a tale laden with, according to Kirkus Reviews “fairly heavy, Hebraic patriarchal sentiment.” In a career-influencing switch, in 1960 she played a thieving prostitute in the New York premiere of Jean Genet’s “The Balcony.” For this production, Miles was helped into her skimpy costumes by her dresser, a young actress and singer named Barbra Streisand.

Miles was again cast as a streetwalker in a production of Eugene O’Neill’s “The Iceman Cometh,” in 1957. In 1962 she was Raisa the Witch in “A Chekhov Sketchbook,” starring the Lithuanian Jewish actor Joseph Buloff, a mainstay of Jewish theater who would later receive the Itzik Manger Prize for contributions to Yiddish letters.

Miles preferred modestly paid fare like “A Chekhov Sketchbook” to TV stardom, which, to her, meant a lifetime of game show appearances. In 1960, she was cast in a sitcom pilot, “Head of the Family” written and performed by Carol Reiner. As media historian Ginny Weissman explained, this later became the “Dick Van Dyke Show” which would earn a book-length homage by the writer Vince Waldron, among others.

Yet the original pilot with Miles arguably possessed more potentially disturbing authenticity than the slick, superficial, and decidedly less Jewish product that resulted. Miles portrayed Sally, a comedy writer, as a younger version of Selma Diamond, rough around the edges but not constantly playing to an invisible crowd, as her successor Rose Marie would. With Carl Reiner at the helm, the pilot show had a Kafkaesque aura, expressing the horrors of writing comedy to please a humorless, self-obsessed, all-powerful potentate. This was, to some degree, grim stuff, capturing the real angst of writing for a personality like Sid Caesar. Even Miles’ TV comedy writing partner, the young standup star Morty Gunty, was fresher, more offbeat, and less machine-like than Morey Amsterdam, whose status as one of the few overtly Jewish characters on 1960s TV was belied by the self-avowed corniness of his jokes. Even Reiner’s onscreen son, played by the child acrobat Gary Morgan (born Panansky to a Russian Jewish showbiz family) was a more heartfelt, truer actor than his one-dimensionally sweet replacement, Larry Matthews (born Mazzeo, of Italian American stock).

Offering a dose of credibility, Miles fit ideally with the rest of Reiner’s creation, for which the US TV viewing public was clearly unprepared at the time. Nor was the show’s dour American Jewish producer, Sheldon Leonard (born Bershad) ready for such an experiment. “Head of the Family” might well have been more artistically rewarding than the ensuing “Dick Van Dyke Show,” although it likely would never have rivalled the latter’s crowd-pleasing run. Undeterred, Miles found a congenial home in the gritty noir TV dramas “Naked City” and “Route 66,” where her straw-like blonde hair and seductive postures echoed those of Melina Mercouri and other 60s screen temptresses, while her speech remained firmly in the New Yawk Jewish idiom.

By the time of Schlesinger’s “Midnight Cowboy,” an early career apotheosis had occurred. Miles plays an aging woman who must confront the fact that time has turned her from pursued to pursuer. When she encounters a clumsy, inexperienced male escort, she expresses shock at being expected to pay him for his favors, rather than vice versa, which had been the story of her life.

Another experience of talking tachlis occurred with a celebrated gesture in 1973, when Miles avenged the insults of the critic John Simon. The latter had referred in print to Miles as a “gate-crasher” at parties to which, she specified, she was always invited. Simon had also insulted her former dresser Streisand with crypto-Jew-hating allusions to Barbra’s nose, including the claim that on film, it “cleaves the giant screen from east to west, bisects it from north to south. It zigzags across our horizon like a bolt of fleshy lightning.” There was an element of Yiddishkeit in Miles’ Jewish mother-like vengeance; at a buffet table, she patiently arranged a plate of pâté, steak tartare, Brie, and potato salad for the sole purpose of dumping them on Simon’s head.

By then, she had already settled with surreal ease into the entirely improvised, scriptless void of an Andy Warhol film, “Heat” (1972) where she gracefully ceded the status of chief onscreen beauty to the movie’s proclaimed star, Joe Dallesandro, who was unencumbered by any acting talent whatsoever. In what would be her second Oscar-nominated turn, in “Farewell My Lovely,” (1975) Miles again played a truth teller, someone who delivers unpalatable veracity and pays the price. As a drunken, frizzy haired informant for Philip Marlowe in the adaptation of Raymond Chandler’s classic thriller, she is clearly doomed.

As the years passed, the brushstrokes on her acting palette broadened. By the time of “Crossing Delancey” (1988) Joan Micklin Silver’s adaptation of a play by Susan Sandler, Miles incarnates the shadchan Hannah Mandelbaum with the blowsy, raspy, self-loving gusto of a Harvey Fierstein drag creation. Miles vivifies each scene in which she appears, yet her theatricality overpowers even the actress Reizl Bozyk, a veteran of the oft-histrionic Yiddish-speaking stage. Miles’ lethal takeoff of an Estelle Getty-style comic Jewish mother in “She-Devil” (1989) was also in this vein. In later roles, she was able to inject a bit of ominous evil, as in her brief appearances as Dolores the Realtor in “Wall Street” (1987) and its sequel, “Wall Street: Money Never Sleeps” (2010).

Immersed in the reality of the actor’s life, how seriously did she take the stories told on film? A journalist recalled taking Miles to a screening of “Sophie’s Choice” (1998) based on William Styron’s Holocaust-themed novel only to have her bellow disruptively during the proceedings, “SO WHAT IS SOPHIE’S CHOICE ANYWAY?” Nor, inexplicably, did she pursue the title role of a Southern Jewish matron in “Driving Miss Daisy” (1989), one of the few movie parts she did not avidly seek. Had she played Miss Daisy, instead of the exquisitely genteel British actress Jessica Tandy, the results might have been less dainty, and therefore truer to life.