For Walter Matthau On His 99th Birthday 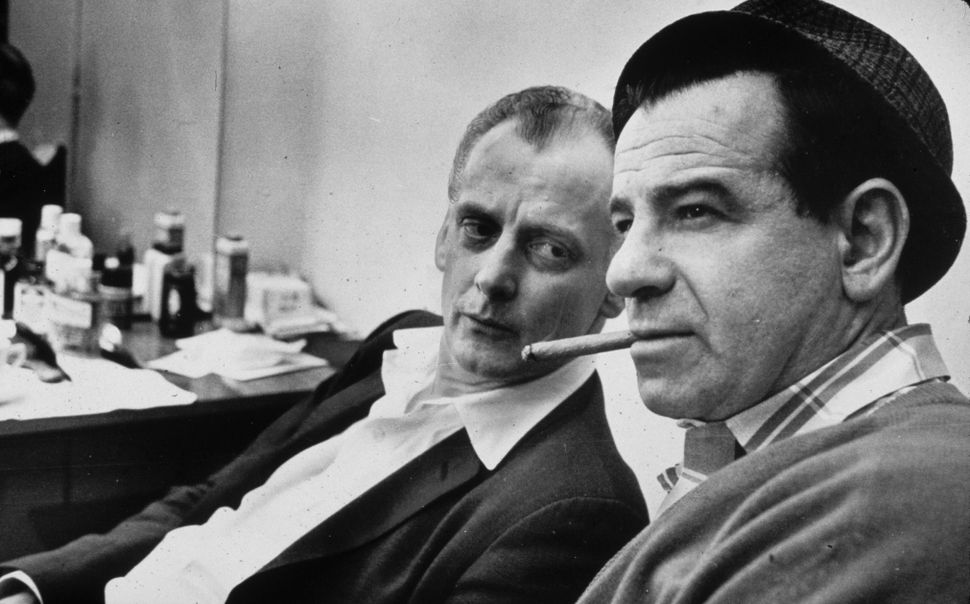 Even his face seemed as if could slouch. The bulbous nose, the folds of skin, the eyebrows always raised, the eternal smirk that seemed to call you a schmuck even if he never spoke that word. His voice brayed and drawled, Lower East Side schmatta salesman crossed with W.C. Fields. He was the dubious wise-ass, sauntering across stages and screens a generation before Bill Murray. Long before Tommy Lee Jones nabbed an Oscar as U.S. Marshal Gerard in “The Fugitive,” he was the seemingly guileless investigator who knew so much more than he let on. And, in the 1970’s, the era of the unsexy sex symbol, he wooed leading ladies to the soupy soundtracks of Boz Scaggs and easy-listening George Harrison. He excelled at playing the preternaturally grouchy old man long before he became one.

Walter Matthau, who passed away in July, 2000, would have turned 99 today. These days, whenever he appears on a TV screen, he has become so familiar that it’s easy to forget who he was, what he represented. And how much he mattered.

Matthau was part of a bygone generation of actors, one that could not have existed in an era of HD TV — hirsute, slovenly, five o’clock shadowed, defiantly non-Photoshopped. Sometimes you’d see him dolled up in a tuxedo, but he always seemed more at home in plaid shirts, bad ties, and cheap sport coats, the smell of cheap aftershave and bad scotch seeming to waft right off the movie screen.

His face, his voice and his general demeanor conveyed not only a uniquely American story but a uniquely Jewish-American one. The outsider cracking jokes at the society excluding him; the cadence of speech that was every bit as pre-Giuliani New York as an egg cream, a yellow taxicab with ripped upholstery, or a free side of pickles. The word “Jew” is not uttered once in Neil Simon’s “The Odd Couple,” yet it permeates every aspect of Oscar Madison as he spars with his fussy goyish roommate Felix Ungar.

The ethnicities of the characters Matthau played during his heyday can be hard to pin down; most sound as if they’re trying too hard to assimilate, concealing their actor’s origins — Willie Gingrich; Julian Winston; Jake Martin; Willie Clark; Morris Buttermaker. Only in the twilight of his career were the Jewish characters he played readily identifiable as Jewish — Max Goldman, Nat Moyer, Albert Einstein. But by then, of course, Walter Matthau wasn’t really Jewish or non-Jewish anymore; he was just Walter Matthau.

Of his history, we know less than we’d like, which is to say he said a good deal more than the truth. Anticipating the antics of future rock stars and poseur celebrities, he tweaked a credulous press. Was his name shortened to Matthau from Mathuschanskayasky as he once said? Unfortunately no. Was his middle name Foghorn? Not so much, though he certainly could sound like one. Was his father a Catholic priest in Russia who fell in love with a Lithuanian Jew? No, his parents were both Russian Jews who arrived at Ellis Island, and lived the lives of typical Jewish immigrants—mom, a sweatshop worker; dad, a peddler and electrician.

“He lied a lot,” his friend and frequent co-star Jack Lemmon told Larry King in 2000.

“He told different biographies,” said King. “He liked doing that.”

“When I did The Odd Couple, I would do it a different way each night,” Matthau told an interviewer in 1994. “On Monday I’d be Jewish, Tuesday Italian, Wednesday Irish-German. I would mix them up. I did that to amuse myself.”

In the end, though. the details don’t really matter since both the lies and the truths tell the same basic stories. Of a man who was born in the New York Jewish shtetl in 1920, the son of striving Jewish immigrant parents; who as a teenager attended Seward Park High School and worked the concession stands at the Yiddish Art Theatre, which now survives as the Village East Cinemas; who went on to serve with the U.S. Air Force as a radioman-gunner in England during World War II; who, inspired by the Yiddish actors he’d seen in his early youth, came back to study acting at The New School.

From there, the story becomes the one Matthau lived out in public: the Billy Wilder films, Neil Simon comedies and 1970s crime thrillers that made his career and defined his persona; the few misbegotten flicks that are best forgotten — Matthau may have been nominated for an Oscar for the film “Kotch,” but try to watch that film without cringing.

The roles he played describe not only the arc of his life and career, but also the place of the Jew in American society. He started out as a bad guy, playing the evil Stan Bodine opposite Burt Lancaster in Lancaster’s western “The Kentuckian,” the scheming Hamilton Bartholomew in “Charade”; a sheriff chasing down Kirk Douglas in “Lonely Are the Brave.” He became a comic figure, but still with something of the outsider about him — he was a shyster lawyer, a curmudgeon, a drunk, a slob, a crook. We laughed along with him, but he was still the Other.

Something changed, though. But it wasn’t Matthau. If you look closely at the career he had and the roles he played, you can see a gradual transformation, a slow move from outside in until Matthau has become something else entirely — a hero in “The Taking of the Pelham 1-2-3,” a plausible romantic lead in “House Calls” and, in “Hopscotch,” even a sort of James Bond. And, here’s the important part: He managed to do this while never losing the roughness, the accent, the slouch and the smirk.

It was as if Matthau hadn’t changed at all. He hadn’t assimilated; America had assimilated to accommodate him. And whether he was born as Matthau or Matthow or Mathuschanskayasky no longer mattered. He had invented himself, and, no matter what his true story might have been, he was accepted.

Saul Allerton is a New York-based writer and critic.

For Walter Matthau On His 99th Birthday