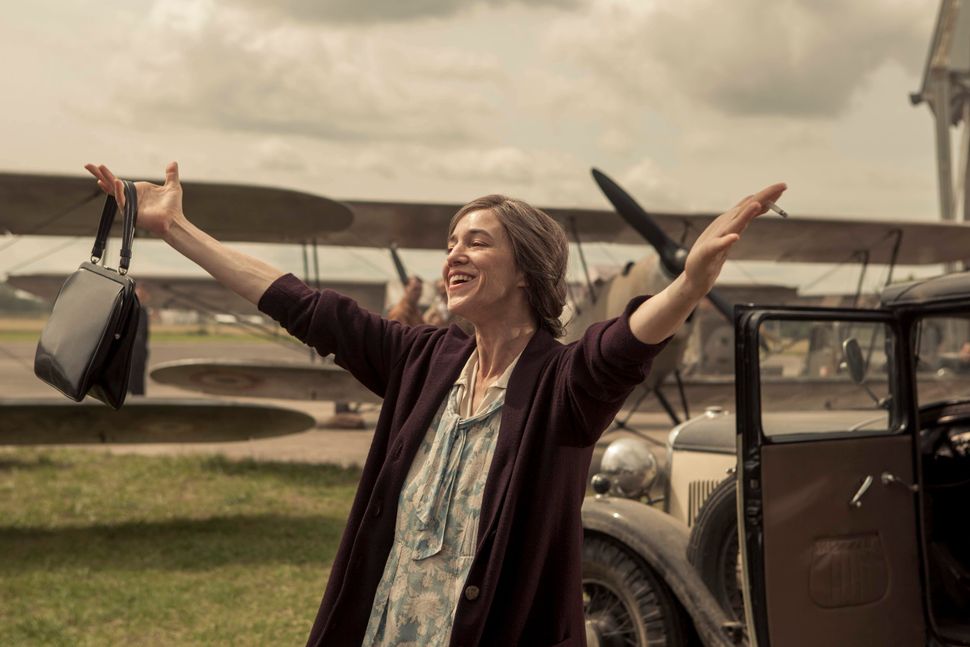 Charlotte Gainsbourg in “Promise at Dawn” Image by Menemsha Films

Charlotte Gainsbourg, 48, has little doubt that, over the course of her career, she has chosen, consciously or unconsciously, “transgressive” projects to compensate for her shyness. “So perhaps that’s why I am attracted to the unexpected,” she said during an interview. She has a soft voice with the hint of a British accent. “Also, I want to surprise myself.”

Born in London and brought up in France, the New York-based actress, who is also a singer-songwriter, is the daughter of actress Jane Birkin and the late French Jewish singer-songwriter Serge Gainsbourg, a couple well known for their tumultuous artistic collaborations, and most pointedly their sexually explicit musical duet, “Je t’aime…moi non plus,” that caused quite a stir upon its release in the late 60s.

Charlotte Gainsbourg first became the subject of controversy when she was 13-years-old and performed alongside her father in his now infamous tune, “Lemon Incest,” suggesting that fathers and daughters have a sexual bond. Two years later, in the 1986 film “Charlotte Forever,” in which she and her father co-starred, the incestuous theme recurred, though she has vehemently denied any impropriety in their relationship.

Since her father’s death in 1991, Gainsbourg has produced several albums and has been featured in a host of films, including “The Cement Garden,” “21 Grams,” “Norman,” and Lars Von Trier’s “Nymphomaniac” and Antichrist,” where her portrayals of violent, sexually masochistic women have been criticized as misogynistic.

in the new film “Promise at Dawn,” Gainsbourg plays Nina, an overbearing, demanding Jewish mother — a role that couldn’t be further removed from her earlier roles. Directed by Eric Barbier, the film is based on the best-selling autobiographical novel by Romain Gary, published in 1960. An earlier film inspired by the book (a recognized classic in France) was released in 1970 and directed by Jules Dassin.

Spanning two decades — the 20s through the mid-40s — and seen through the eyes of the son (played at various ages, respectively, by Pawel Puchalski, Nemo Schiffman and Pierre Niney) the coming of age story recounts Gary’s life as he and his mother travel from Poland to the south of France and later, his experiences as an airplane bomber in World War II. Throughout, his defining relationship is the one he has with his mother, a fanciful woman who constantly reinvents herself, claiming to be an actress or French designer, while working as a seamstress or hotelier and prodding her son towards greatness, reminding him that he will be, must be, a general, a French Ambassador, a novelist and a great womanizer too.

What makes Gainsbourg’s performance so memorable is the way she reshapes the stereotypical elements and in the process forges a unique character who is at once vulnerable and aggressive, deluded and grounded, comic and tragic.

FORWARD: How do you create a character like Nina, a figure out of a fictionalized autobiography?

GAINSBOURG: Despite being inspired by fact, it is fiction. Of course I viewed photos of her. I also researched the history and places she stayed on her journey. But in the end not much is known about her. Even in the novel it’s not fully clear who she is. So I had great freedom in my interpretation.

Nina could easily have become a stereotype of a Jewish mother yet you managed to make her so much more. Was avoiding the stereotype a conscious challenge?

No, I didn’t think about it at all. My reference point was my [paternal] grandmother, what she was like physically, the way she moved and spoke and her accent. I had a clear image of who she was starting out.

Was your grandmother a Holocaust survivor?

Yes. She and my grandfather escaped Russia during the Russian Revolution and during the Second World War lived in hiding. For a while they lived in Turkey. Like Nina they saw France as the Holy Grail.

Was that a misguided notion for Jews?

I can’t speak for all Jews. Many Jewish refugees came to America. My grandparents were drawn to France for cultural/artistic reasons. My grandfather was a pianist.

Do you define yourself as Jewish?

I do. I identified as a Jew growing up and now I’m married to a Jew. Well, we’re not actually married, but we’ve been together for 28 years. [He’s Israeli director Yvan Attal and the couple has three children]. His parents celebrate the Jewish holidays. So, that’s still very much part of me. But on my mother’s side I’m Protestant and never really acknowledged that. Now I don’t want to deny that side either. I’m comfortable acknowledging both sides.

Does your Jewish background inform the way you approach a character like Nina?

Completely, though it’s nothing I think about consciously. Still, I intuitively understand how Nina avoids the subject of her being Jewish and how she prays in a Russian Orthodox Church and how she runs away from Poland and her sense of shame.

What were the biggest challenges in playing Nina?

The aging process, but especially the Polish accent, which was very important for the character I felt. Still, it was very difficult. I worked with a coach. But there were other challenges with my doing the accent. In France audiences don’t want to hear foreign accents from actors who don’t otherwise have them. Accents are viewed as unbelievable. My director felt that way too, but after the first day he admitted I was right.

I imagine working in any foreign language is challenging.

It’s both restrictive and freeing.

Are you most comfortable speaking French?

How is your acting different when your character is speaking French as opposed to say English?

Looking back at your at times controversial life and career, in hindsight would you do it any differently?

You would still sing your father’s song, “Lemon Incest?”

Yes. My father was a provocateur and I adored that in him then but I appreciate him especially now in a time when everyone is afraid of expressing anything. That song would never be done today, though it was scandalous then too.

Any second thoughts about appearing in the work of Lars Von Trier, another provocateur accused of misogyny, creating women who are violent and/or masochistic?

He writes about a woman’s pain and in the end he’s writing about himself, not women at all. His main characters are him.

He’s also been accused of anti-Semitism. In Cannes (2011) he said he was a Nazi and was banned from the film festival until last year.

It was a bad, bad joke on his part and we all felt awful when he said it because it’s not funny. But he’s not an anti-Semite. He just likes to be provocative and he’s also uncomfortable and nervous at these press conferences so he may say the wrong thing.

Would you work with him again?

What are your feelings about the “Me too” movement?

It had to happen. It was a necessity. But I think perhaps we’ve gone too far. Of course rape and sexual abuse are terrible, but that’s very different from some man being out of a job because he addressed a woman inappropriately and he hasn’t even been tried in court.

Catherine Deneuve certainly voiced those opinions early on [in a well-publicized, controversial open letter to Le Monde and many notable French women signed it. American feminists were enraged.

American women get shocked so easily. I was on a radio program with two English women and we were talking about the “me too” movement. And when I said it was complicated and not all men are pigs, they were shocked. I felt so European.

Are you worried that the current cultural climate — political correctness, the “me-too” movement — could potentially censor provocative films?

Yes, that’s always a possibility when you’re not free to express yourself. That’s scary.

What’s your next project?

Promoting my husband’s film, “My Dog Stupid,” which I’m in. It’s based on a John Fante novella. It’s a funny, touching dark comedy.

Any interest in directing?

Yes, possibly, but the story would have to be extremely personal. I don’t think I’m a natural director otherwise.

Getting back to Nina is she a good mother or a bad mother?

I can’t answer that except to say there’s darkness there yet she is a positive force in her son’s life.

And what do you want an audience to feel at the end of the film?

That they’ve witnessed a love story between a mother and a son. To appreciate how touching and moving it is.

Simi Horwitz is an award winning feature writer/film reviewer who won a 2018 Front Page Award from the Newswomen’s Club of New York for her FORWARD story, “Ruchie Freier: Hasidic Judge, American Trailblazer,” and most recently received first place prize from the Los Angeles Press Club for “Reviews-TV/Film, All Platforms,” given at the 61st Southern California Journalism Awards this past June. Her reviews were published in FILM JOURNAL INTERNATIONAL