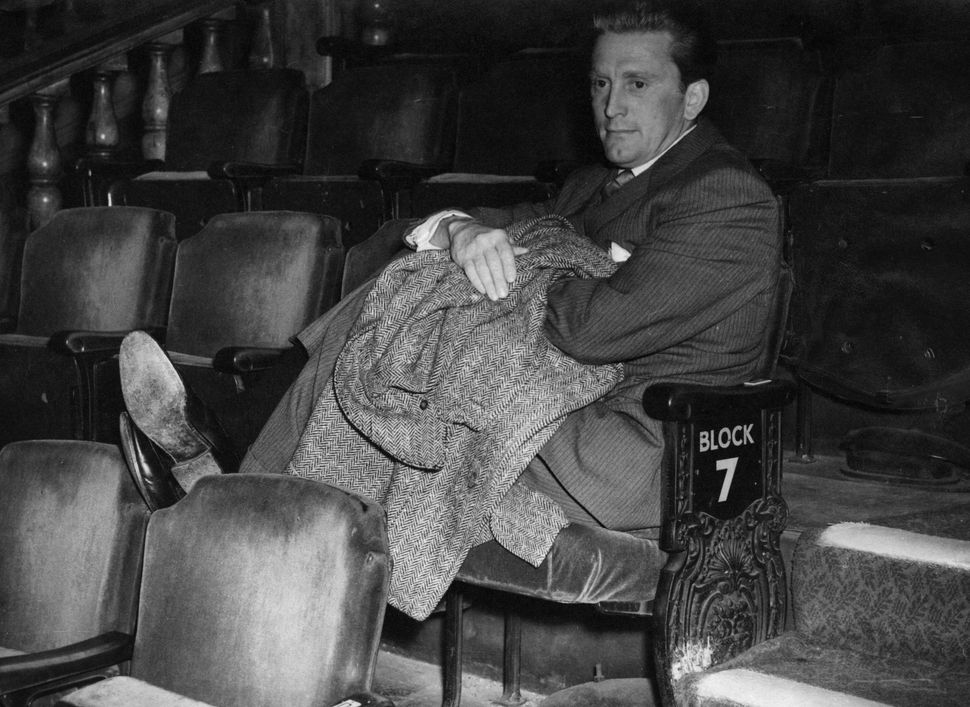 In honor of Kirk Douglas’s 103rd birthday, we reprint this tribute to the movie legend who was born Issur Danielovich to immigrant parents.

Kirk Douglas, who turns 100 on December 9, is both a movie legend and a Hollywood anomaly: a star divided. Most stars lodge in our collective consciousness. Douglas, while a first-magnitude star, was never quite an indelible one, save maybe for the dimple in his chin, never one who seemed to capture the zeitgeist the way some of his contemporaries did. Arriving in Hollywood when it was transitioning from classical acting to the Method, he was part traditional actor, part Method. Handsome but occasionally petulant, he was both pretty boy and thug. He could be cool, but also explosive, both iceberg and volcano. And perhaps above all he was always both outsider and insider — the man who never quite fit comfortably into any peg-hole.

By now most Jews know that Douglas was born Issur Danielovich to two illiterate Russian Jewish immigrant parents, in Amsterdam, New York, not far from Albany. He grew up destitute, a “nobody,” as he later put it, and he grew up resentful. First out of survival and then out of professional necessity, he tried to hide his roots, as he edged from Issur Danielovich to Izzy Demsky and finally to Kirk Douglas, a name he chose for himself after graduating from St. Lawrence University and embarking on his acting career. He moved to New York, got a scholarship to the American Academy of the Dramatic Arts, found himself on Broadway, and then was lured to Hollywood when a friend and fellow Jew, Lauren Bacall, who had preceded him there, passed his name to producer Hal Wallis.

From poor first-generation Eastern European Jew to Hollywood star — Douglas’s was an assimilationist fairy tale. But the assimilation was never complete, which may have been a Jewish actor’s occupational hazard. There wasn’t much room for Jewish actors in Hollywood unless they foresook their Jewishness. Paul Muni, born Muni Weisenfreund, buried himself in make-up and other ethnic identities; it was said he answered the door in costume. Edward G. Robinson, born Emanuel Goldenberg, made his career playing Italians. Swarthy Jeff Chandler, born Ira Grossel, played Cochise in “Broken Arrow.” And John Garfield, born Julius Garfinkel, affected an average American Joe.

Douglas’ accommodation was one of the most unusual. His Jewishness was too stubborn to shake, even if he wanted to shake it, and in any case, he was extremely ambivalent about doing so. Virtually alone among Jewish stars, he played Jews, including a Holocaust victim in “The Juggler” and Israeli colonel Mickey Marcus in “Cast a Giant Shadow.” Issur was like a second self — or, maybe, a first self. And of all the divisions that roiled in him, this seemed the most significant: the division between Issur and Kirk. It gnawed at him, haunted him, rebuked him. In his autobiography, “The Ragman’s Son,” he frequently recalls episodes of anti-Semitism as Issur/Izzy and others, later, as Kirk, when gentiles thought he was one of them and could talk openly about their Jew hatred. And what emerged then, in the man and in the performances, was rage — rage at his childhood poverty, rage at his shiftless father, and rage at the anti-Semitism that surrounded him and taunted him. “There was an awful lot of rage churning around inside of me,” he confessed in “The Ragman’s Son.” Kirk Douglas was the virtuoso of rage. A lot of that was Jewish rage.

Other stars of that era, the late 1940s and 50s, brooded and seethed. It was almost de rigeur for a character to be writhing in psychological turmoil. Montgomery Clift, James Dean, and, of course, Marlon Brando were all tortured souls — misunderstood rebels, chafing against the culture and challenging the mores and aesthetics of button-down 50s America. While they did erupt under pressure — Brando’s eruptions were historic — these were always veiled cri de coeurs of men in anguish lashing out at their hurts and pleading for help. 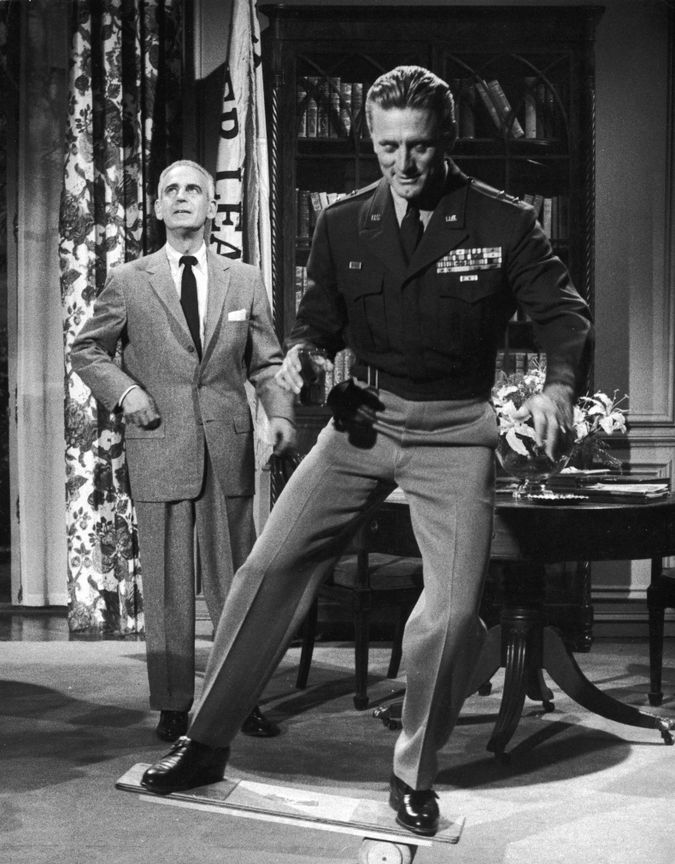 Off His Feet: Kirk Douglas in the 1957 film “Top Secret Affair.” Image by Getty Images

And then there was Douglas. Douglas didn’t convey that sense of woundedness — of a man wronged by an implacable world. Douglas was just plain angry, and his characters were closer to derangement than those of any other major star. His face was often clenched, which is how impressionist Frank Gorshin would imitate him, and his famously affable grin could, and often did, instantly turn into a snarl. There is a scene in William Wyler’s “Detective Story” where Douglas, playing a cop on the trail of an abortionist, discovers that his beloved wife has had an abortion. The volcano erupts. “I would rather go to jail for twenty years,” he yells viciously, “than to find out my wife is a tramp.” It erupts again in “Lust for Life” where Douglas plays Vincent Van Gogh crossing the line into madness. It erupts in Champion where Douglas plays a hell-bent boxer who uses and discards everyone on his way to the top, and again in “Young Man With a Horn” where he turns on his mentor then descends into an alcoholic hell. Indeed, Douglas is scarcely in control of himself in many of his most famous roles.

And that is the other thing about Kirk Douglas. Though he played his share of straight arrows and men of conviction — see “Paths of Glory” or “Seven Days in May” or “Spartacus” — he specialized in unlikable characters, users and heels and no-accounts, to the point where, if no actor was ever as angry as Douglas, no actor flirted with unlikability as much as Douglas did either. He began his film career in the noir “The Strange Love of Martha Ivers” as the titular heroine’s drunken, emasculated husband and continued down that road. Think of his ambitious down-at-the-heels reporter in Billy Wilder’s “Ace in the Hole” who manages to stage a media extravaganza out of a man trapped in a mountain cave, and prolongs the rescue to prolong the show, until the man dies. Or think of him in one of his three Academy Award nominated roles, Vincente Minnelli’s “The Bad and the Beautiful,” in which he plays a ruthless film producer who uses people as rungs on his ladder to success, and practically defines the role of snake. This was Douglas’s preference. “Virtue is not photogenic,” he once said. Villainy clearly was.

Even on those occasions when he played a relatively conventional hero, he was usually challenging authority. Again, “Paths of Glory” and “Spartacus” come to mind. The role he had always coveted — to the point of buying the rights to the book — was Randle McMurphy in Ken Kesey’s “One Flew Over the Cuckoo’s Nest,” which speaks to how well Douglas understood his persona. McMurphy was strong, iconoclastic, a bit addled, and angry — a pretty good description of Douglas’ screen image, though McMurphy had less malice than Douglas. Unfortunately, Douglas could never get the financing, so he turned the rights over to his actor/producer son Michael, who did, and who then cast Jack Nicholson because, he said, his dad was too old. Nicholson made a great McMurphy. It may be his signature role. You have a feeling, though, that Douglas would have brought more menace and heat to the character and more of that derangement.

The film in which he said it did come together for him was a modern Western, “Lonely Are the Brave,” in which he plays an itinerant ranch hand who tries to spring a friend from jail (where he is being held for having helped illegal immigrants) by getting himself incarcerated and then, when the friend won’t budge, beats up a deputy and escapes into the hills. A long pursuit ensues, pitting Douglas and his horse against the incursions of modernity. The film is an elegy for a way of life as well as a celebration of it. Douglas obviously identified with the doomed cowboy — with his rage, his loneliness, his anguish, his anti-authoritarianism and his anachronistic sense of selfhood in a conformist world. Douglas seemed to feel that way too, his stardom notwithstanding.

Douglas was always something of a lone wolf. While other stars had the security and support of the studio, even as the studio system was crumbling, Douglas preferred to be a free lancer. When the system finally fell, he was one of the first to form his own production company, Bryna, named for his mother, and along with commercial fare like The Vikings and Seven Days in May, he produced unusual projects, like Paths of Glory and Lonely Are the Brave, that were not obvious box office attractions. One of the accomplishments of which he was proudest was not something he did as an actor but as a producer when he claimed to have broken the Hollywood blacklist against suspected communists by hiring writer blacklistee Dalton Trumbo to pen “Spartacus” and then giving him screen credit. (Trumbo would also write “Lonely Are the Brave.”)

There are disputations over whether Douglas really deserves that credit. Trumbo’s family later said that Trumbo himself deserved it, and the film’s hands-on producer, Eddie Lewis, has said he was the one who got Trumbo. But the point is that Douglas did buck the authorities and did put himself on the line, even if the communist stigma had already begun to fade. It was certainly in character for him to do so, not least because so many of those blacklistees, though not Trumbo, were fellow Jews. It may be odd to say of an actor whose stage name was Scottish and who didn’t emit any apparent ethnicity, that as well as being one of the angriest stars and often one of the most unlikable, he may also have been the most Jewish of stars in the 50s and 60s before ethnicity became voguish. I think that is because just as Barbra Streisand would transform Jewish otherness into a generalized otherness for her audience, Douglas transformed Jewish resentment into a generalized resentment for his audience.

That is how we may remember him on his 100th birthday: as the man who never forgot who he was or how hard it was to maintain his identity in a society that was not receptive to it, and yet who never stopped fighting to be himself.