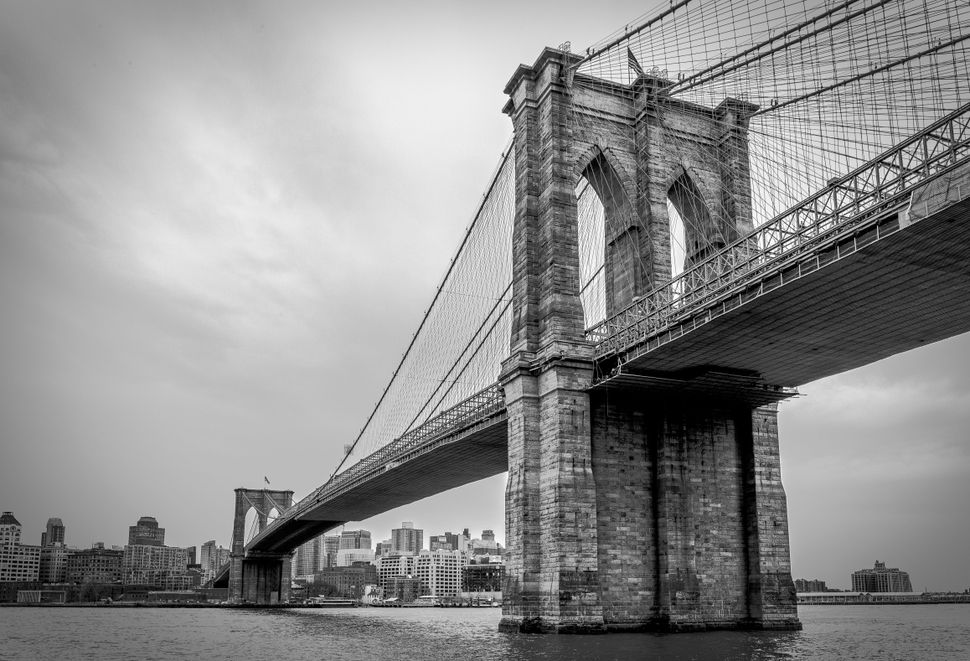 “Motherless Brooklyn” is the “La La Land” of noir, a work of exacting, exhausting competence that tries to summon the spirit of midcentury Hollywood films by recreating them shot for shot and trope for trope. Some things you’ll find in it: raincoated sleuths silhouetted by streetlights; garish neon mirrored in murky puddles; a pinstriped powerbroker studying a model of the city he rules; bleary-eyed men drowning their sorrows in jazz and reefer. Edward Norton wrote, produced, directed, and stars; just as his character spends most of his time following other people, his directing rarely veers off of trails blazed by “Chinatown” and “The Big Sleep.”

On its face, this is neither good nor bad. Film noir is a cannibalistic genre; yesterday’s femme fatales and gumshoes feed the neo-noirs of today. Let enough time pass and those neo-noirs start to look like plain old noirs. In their days, “Chinatown” (1974) and “Body Heat” (1981) seemed like bold, contemporary reimaginings of classics—noirs for a post-Watergate, post-Sexual Revolution audience. Today, they fit comfortably enough alongside the Wilder and Preminger masterpieces that inspired them.

The chase ends in the death of Bruce Willis’s macho detective / benevolent father figure, a crime plainly orchestrated by Alec Baldwin’s tyrannical city planner / malevolent father figure, who’s finalizing plans for a freeway through Fort Greene. The next two hours unfold with the logic of the First Transcontinental Railroad: that these two plot points will meet is never in any serious doubt; the only questions are how and when. Edward Norton plays Lionel Essrog, a brilliant detective with Tourette’s who tasks himself with solving the mystery.

Has there ever been an actor as consistently miscast as Edward Norton? In the two decades since Lethem finished his novel, he has played a neo-Nazi, a working-class drug dealer, a swaggering Method actor, and the Hulk, endowing them all with the same lean, muscular expertise. What he has never managed to do is justify why these volatile characters reach their breaking point and descend into madness; he specializes, instead, in carefully controlled evocations of losing control. And now he’s playing—fancy that—a genius with a disability, in a period setting. Again, this is neither inherently good nor inherently bad, though you’d have to be a fool, or the Academy of Motion Picture Arts and Sciences, to deny that the bad examples of this kind of role vastly outnumber the good.

When Norton’s performance is good, its virtues are those of Lionel himself: brisk professionalism, with an eye for the telling detail. But it’s hard for a character like Lionel to flourish in a film as self-serious as this one—and for that, Norton has only himself to blame. In Lethem’s novel, Lionel’s Tourette’s is inseparable from his needling intelligence, and from the novel’s knowing distance. In the film, devoid of that knowingness, the Tourette’s shrivels into a gimmick, a pretty little device that could be yanked out of the film without upsetting anything around it.

Long sections of “Motherless Brooklyn” are composed of devices like this. There are too many little flourishes, too many faux-poetic moments that seem to cry Art! before the film scurries on to the next thing. Lionel takes his mentor’s death hard—we know because we see him sucking tea out of a pipe. A few puffs, the jazz swells, and suddenly he’s writhing in avocado-green CGI murk that can only symbolize the depths of his anguish. About five seconds later, just as things were starting to get interesting (i.e., just as the clichés were starting to subside), we fade to Alec Baldwin swimming laps at his favorite athletic club. For some reason, we’re not permitted to see his face in closeup for a little while longer—possibly so that we know we’re dealing with an extra-mysterious, extra-sinister guy. When we finally get a good look, the camera cuts away so quickly we wonder what all the fuss was about to begin with. String together enough vague gestures of this kind and pretty soon you’ve got something like a movie.

“Motherless Brooklyn” is, to be sure, no worse than the bulk of fall studio releases and a hell of a lot better than the Marvel movies that regularly score 90% or higher on the Tomatometer. It is perfectly watchable, it doesn’t screw up in any big, embarrassing ways, and when you look at a list of the highest grossers in the country, these could be counted major achievements. It also has one genuine inspiration in Alec Baldwin’s character, Moses Randolph, who is, paradoxically, the most relevant-seeming and the most distinctly 1950s part of the film. At times you wonder if Norton switched the setting for Randolph alone.

Baldwin’s character is based—right down to the name—on the city planner Robert Moses. Even if you’ve never heard of Robert Moses, you know all about him: Jewish-born and Ivy League-educated; a wide-eyed liberal idealist turned ruthless powerbroker; a master builder who filled New York with massive, Tower of Babel-like structures. He is a figure straight out of Theodore Dreiser or Frank Norris, the spiritual father of Fitzcarraldo and Tony Montana. Like “Motherless Brooklyn” itself, his life seems like a collection of clichés from books and movies—except that he was, bizarrely, a real person. He was the most powerful man in New York City for much of the 20th century, during which he green-lit Shea Stadium, the Triborough Bridge, Lincoln Center, and hundreds of parks and freeways and beaches.

Like Robert Moses, Moses Randolph is a talented monster. His sins, both private and professional, are presented as inseparable from his success as a creator of public works—somebody has to sweep out all the blacks and homeless before great buildings can be built, he tells Lionel. This is racism masquerading as Randianism (“Atlas Shrugged” was published the same year the film takes place), and it allows the powerful to play by their own rules, since they know what’s best for the ungrateful masses: “Those who can build, do,” he says. “Those who can’t, criticize.” (Trust me, we’re well aware.) .

If “Motherless Brooklyn” doesn’t take Randolph’s speeches seriously, it takes him at his word that he exerts Zeus-like control over New York. Entire neighborhoods live and die by his decrees. When we learn that he fathered one of the film’s main characters by raping the character’s mother, it’s as if all the city’s woes sprang from his diseased libido. The intricate mysteries of New York City turn out to be family matters, of a curiously Victorian-Gothic variety.

Maybe it’s not surprising that “Motherless Brooklyn” should end on this note—a noir is a kind of detective story, after all, and the modern detective story was invented by Victorians like Wilkie Collins and Arthur Conan Doyle. And maybe there’s something more to this analogy. Contemporary fiction is decidedly Victorian in its sentimentalism, army-sized casts, and frenzies of plot. I’m thinking especially of novels like “The Goldfinch,” “All The Light We Cannot See,” “Let The Great World Spin,” “Extremely Loud and Incredibly Close,” and various Lethems—what Bruce Robbins, in an interview with Columbia’s undergraduate magazine, called the “trying to connect us all in a city” book. At a time when London was becoming the densest, filthiest, most dangerous place on the planet, Victorians wrote books that mimicked the city’s complexity but ultimately simplified it, reduced it to concepts that any fool could understand, like family. You could argue there’s a similar tendency in contemporary fiction, and that “Motherless Brooklyn” is a prime example. The revelation that Moses Randolph is a rapist is horrifying, but ask yourself which is worse—gentrification as a self-perpetuating force, or gentrification as the handiwork of one evil, lustful man? At least in the latter case the problem can be solved by firing the bad people.

Much has been made of the decision to cast Baldwin, SNL’s resident Trump impersonator, as a brash, egomaniacal New York builder. As National Review’s Kyle Smith sees it, “Baldwin makes an unintentional case for Trumpism by playing his Trump-like character as an effective leader with a sinister appeal.” This seems pretty wide of the mark, though Smith’s article is worth a read solely for the gymnastics he has to do to make his analogy add up to a compliment: “Like Trump, [Randolph] is called a racist, accused of sexual assault.” Called! Accused!—as if there’s some uncertainty about the way Randolph and Trump treat women and black people.

Still, when you remove the odious party line from Smith’s argument, you’re left with a sound-ish point. Randolph is the kind of man voters wished Trump would be. Personally, he is nothing like the president. He’s a workaholic. He gets mad exactly once, when he isn’t reappointed to one of his three professional titles (at his peak, Robert Moses held nine). His vindictiveness is repeatedly downplayed, laundered through various henchmen. Above all, he is shown to be extraordinarily effective, and at times “Motherless Brooklyn” looks on his effectiveness with an awe that borders on admiration.

It is awe, as much as disgust, that radiates from the film’s culminating scene, a long, gruff negotiation between Lionel and Randolph. Randolph doesn’t atone or even apologize for his crimes—they’re as ineradicable as his buildings—and Lionel doesn’t expect him to do so. Watching this scene in a theater at Lincoln Center, where thousands of black and Puerto Rican families lived before Robert Moses kicked them out, it occurred to me that “Motherless Brooklyn”’s 1950s nostalgia includes more than a dash of nostalgia for Moses, the anti-Trump, the villainous strongman who actually got things done. It took Norton twenty years to make Lethem’s novel into a film. How could he not envy the man who built the Triborough Bridge in half that time?

**Jackson Arn was a first-place Rockower Award winner in 2019 in the category of Criticism and Analysis.*