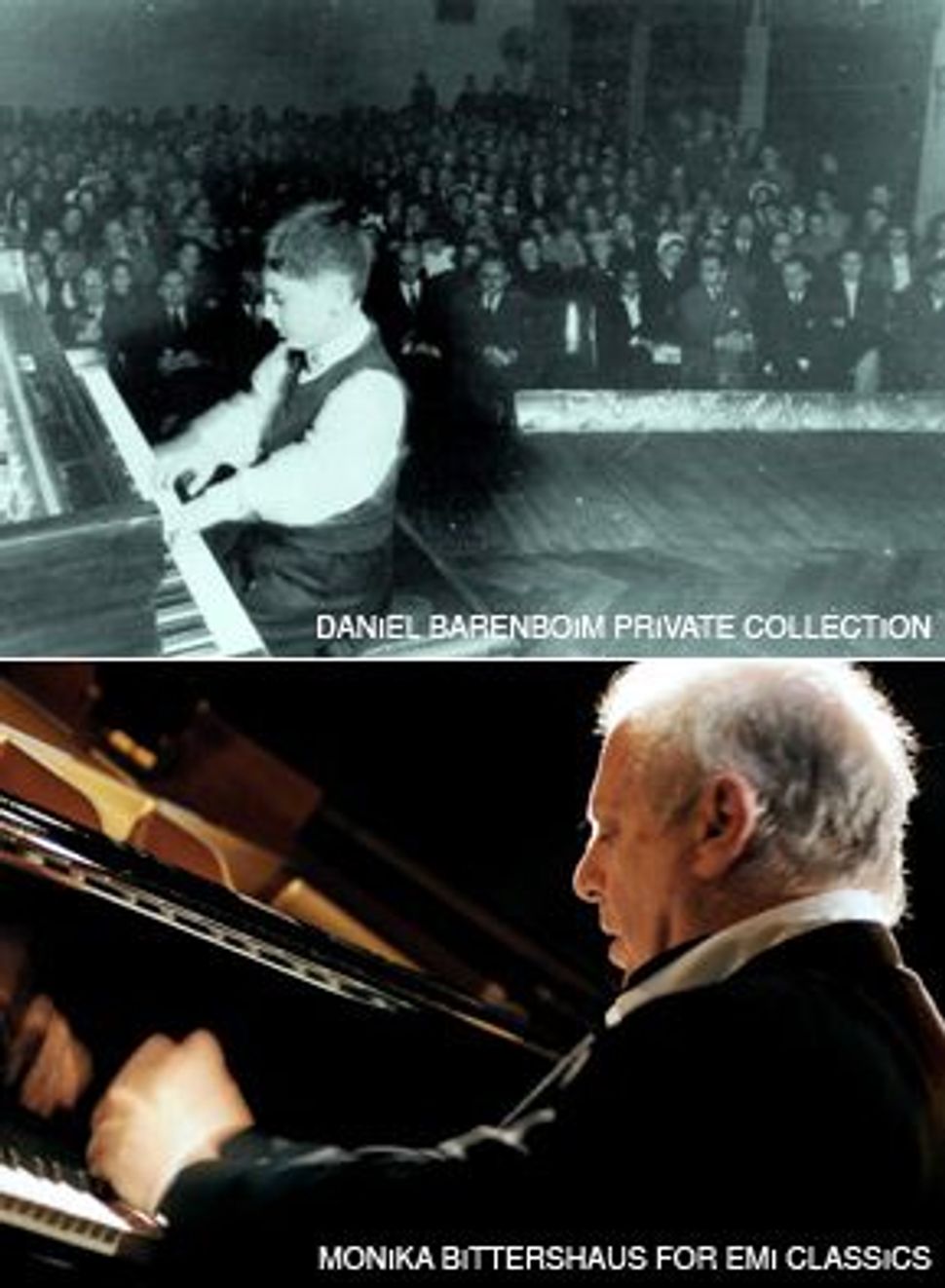 CITIZEN OF THE WORLD: Daniel Barenboim, at age 7 in 1950, playing his first public concert, Buenos Aires; and in 2006, Berlin.

You’d think Godzilla, or at least an enemy flotilla, had stormed the gates of the city, the way the media has trumpeted the news; the Financial Times announces, “Daniel Barenboim has invaded New York.” The 66-year-old pianist-conductor, born in Buenos Aires to a family of Russian Ashkenazic Jews who later immigrated to Israel, is definitely in town. 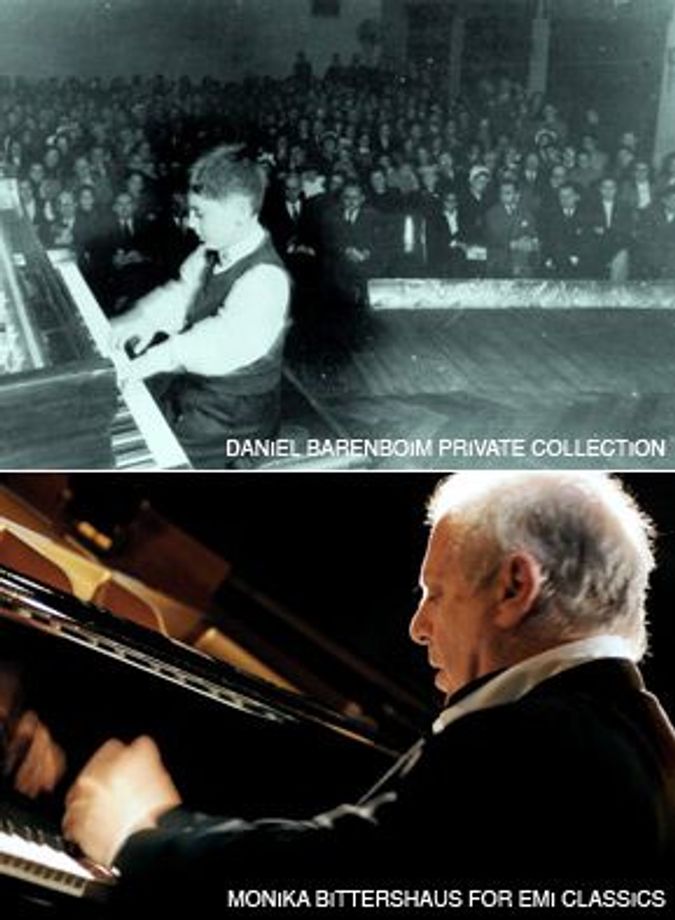 CITIZEN OF THE WORLD: Daniel Barenboim, at age 7 in 1950, playing his first public concert, Buenos Aires; and in 2006, Berlin.

Barenboim lives in Berlin, but he retains citizenship, actual or honorary, from Argentina, Israel, Spain and Palestine. A whirlwind stay during which he will play solo, as well as chamber music, and conduct at several of the most celebrated venues of the East Coast will culminate in a solo piano recital on the stage of the Metropolitan Opera. This all-Liszt December 14 program will be the first such recital since a Vladimir Horowitz event in 1983. Barenboim gave a tryout performance of the Liszt recital December 8 at Philadelphia’s Kimmel Center, although, as he told the Philadelphia Inquirer, he is “suffering very badly from gout. I’m in quite a lot of pain.”

A newly available book of autobiographical musings, “Music Quickens Time” (Verso Books; a British edition last year from Weidenfeld & Nicholson bore a different title: “Everything Is Connected”) accompanies his concerts. Yet, is everything connected in the hyperactive world of Barenboim? His Liszt recital may be previewed on DVD (Euroarts) and CD (Warner Classics) from a performance given last year at La Scala in Milan, Italy. Barenboim is an absorbing, highly able recitalist with AN intense overall grasp of excerpts from Liszt’s “Années de Pèlerinage” that in other hands might seem diffuse. For decades, Barenboim has been an impressive pianist — despite short fingers and arms, an impression accentuated by an unusually high-seated position that makes him loom over the keyboard in apparent masterful disdain. His first recording, at age 12 in 1954, of music by Johann Christian Bach has a haughty and rather superior tone. See YouTube clip below:

Someone with Barenboim’s multiple gifts may be excused for a certain feeling of superiority. During his tenure as music director of the Chicago Symphony Orchestra (1991–2006), musicians nicknamed Barenboim “The Spoiled Brat.” Even earlier, Barenboim was mockingly called “Daniel McBoing-Boing,” in a reference to the 1960s cartoon character Gerald McBoing-Boing, an infinitely energetic tyke. Barenboim’s energy is not in doubt, nor are his musical gifts. Yet, his fluent volubility in several languages (apart from his native Spanish, his Hebrew, German, Italian, French and English are more than serviceable) is no guarantee of trustworthiness, and statements on just about everything are open to multilingual questions.

As a conductor who is sometimes oppressively influenced by the leaden ghost of Wilhelm Furtwängler, his crawling tempos and lack of attention to detail can be enervating. Barenboim told a Met press conference that “Tristan” is not “about love, but about death. The fear of death. This is the motor of the opera. There’s nothing more democratic than death.” Apparently, he feels that instead of the famous “Liebestod,” Isolde should sing a “Tod,” plain and simple. In another interview on the Playbill Web site, Barenboim spoke of his Liszt recital, focusing on the composer’s “Paraphrases” from such Verdi operas as “Aida” and “Rigoletto,” saying, “The concert-going public does not know these pieces.” In fact the “Paraphrase” from “Rigoletto” is hardly a rarity, frequently programmed in concert and having been recorded dozens of times by other pianists. Even the somewhat less familiar “Paraphrases” from “Il Trovatore” and “Aida” have been recorded by a gaggle of noted pianists, so these are not really Barenboim’s personal discovery.

Similarly, “Music Quickens Time” is a mix of banalities, like “When you teach, you learn and when you give, you receive,” and more death obsession, reflected in his statement that by playing music, “one can control, through sound, the relationship between life and death.… Since every note produced by a human being has a human quality, there is a feeling of death with the end of each one.” There are also statements with no clear meaning, like “the disappearance of sound by its transformation into silence is the definition of its being limited in time.” Huh? Or “Mozart’s music is a really impressive model for democratic living: Everything is connected into it.” Or when Barenboim likens Wagner’s “Tristan und Isolde” prelude to political hegemony after the Cold War: “The prelude would be entirely different if the first statement in the opening three bars had a full harmonic resolution.… In the same way it is interesting to imagine how the world would be different today if more than one superpower existed and the Cold War continued to prevail.”

“Music Quickens Time” also pays tribute to Barenboim’s “best friend,” Edward Said (1935–2003), the Palestinian-American critic and political activist who in 2000 memorably posed for press photographs hurling a rock across the Lebanon-Israel border in the direction of Israeli soldiers. Said’s expertise, even in his own field of cultural criticism, is now seen as dubious (The Times Literary Supplement headlined a May 7 article: “Edward Said’s Shadowy Legacy: Tricky With Argument, Weak in Languages, Careless of Facts”), and concerning music, Said was even more unreliable and narrow-minded. “Music at the Limits” (Columbia University Press, 2007), a collection of Said’s music criticism for “The Nation” prefaced by Barenboim, adores the often-unlistenable composer Pierre Boulez (a bizarre taste that Barenboim shares) and also the often-wrong theorist Theodor Adorno, dismisses such great composers as Verdi and Bartók, and calls Pavarotti “a grotesque.”

Barenboim, who idolizes the divisive and just plain wrong Said, may come to realize that his own actions, regardless of motive, sometimes have been like an unneeded extra bull at a corrida. Given the explosive Middle East situation, it hardly helps to add undiplomatic artistic willfulness into the mix, as Barenboim did in 2001 by insisting on performing Wagner in Israel after being asked not to by some Holocaust survivors and by the Israeli government. In September 2005, Barenboim physically confronted Dafna Arad, an Israel Army Radio reporter, taking her uniform as a personal insult to him as a famous defender of Palestinian rights. When Arad explained that she was required to wear her uniform, Barenboim shouted at her and yanked on her epaulets.

Some musicians have taken eloquent political stances, like the anti-fascists Toscanini and Casals, without resorting to this type of behavior. Or, on occasion, by just seeming silly. In 1996, Barenboim told Cigar Aficionado magazine — he is a longtime devotee of Hoyos, Cohibas and Esplendidos — that cigars are “beneficial to his health” and an ideal part of any weight-loss regime. Barenboim added, “The way American people are dealing with cigar smoking, and the way in which it is limited in public places, is against all the principles of American democracy and freedom of thought.” Fortunately, as he plays Liszt on the stage of the Met on December 14, all the posturing and verbiage will melt away, and Barenboim’s considerable musical talent will take precedence, as it always should when we consider this highly talented, if sometimes perplexing, musician.