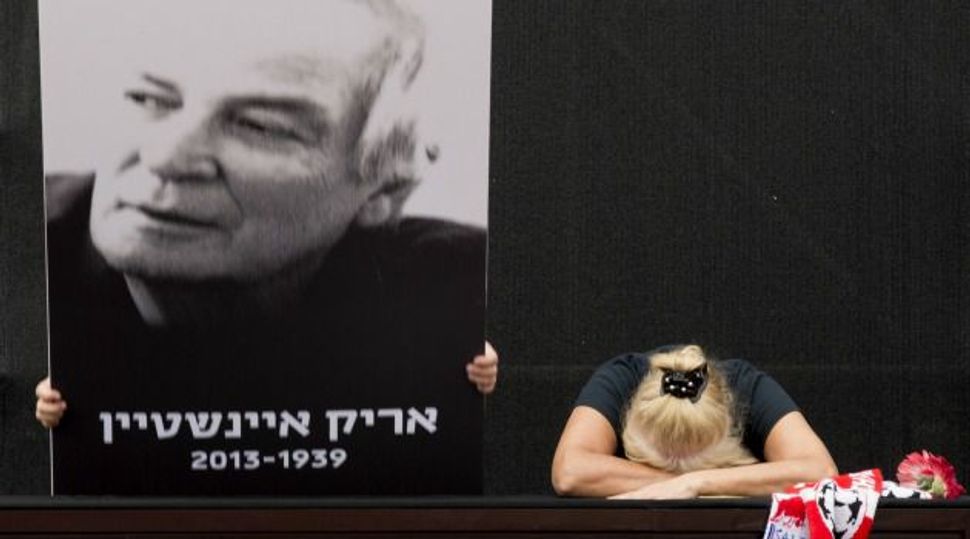 Father To Us All: Immediate reactions to singer Arik Einstein?s death at the age of 74 showed how deeply enmeshed he was in Israel?s cultural identity. Image by getty images

It may be the ultimate testament to Arik Einstein, the Israeli pop singer who died November 26 at age 74, that there won’t be an ultimate testament. He was too deeply enmeshed in the fabric of too many Israelis’ ordinary lives for any one tribute to capture him.

He was Israel’s most beloved entertainer and one of its most influential. His career spanned more than a half-century and generated 44 solo albums in a range of genres from folk to pop ballads, classic rock and old-time nostalgia. He recorded what’s considered the first album of true Israeli rock ’n’ roll, in 1969, wrenching Israel away from its accordion-backed cornball musical culture almost single-handedly — and then led a revival of the old campfire songs starting in 1973 with a series of albums called “Good Old Eretz Yisrael.” His musical collaborations helped launch the careers of some of Israel’s most influential pop composers, several of whom remained his close, lifelong friends.

And yet, when Israelis began to sum up Einstein’s career in the hours after his sudden death from a ruptured aortic aneurysm, there was little in the way of thoughtful review or analysis. The commentary consisted mostly of personal statements of loss, as though every Israeli had lost a close friend. Writers known for their eloquence and insight seemed strangely without words.

“Arik Einstein was, first and last, a father,” Haaretz columnist Uri Misgav wrote. “The father of Hebrew song, of Hebrew pop and Hebrew rock. One of the founding fathers of contemporary Hebrew culture. Hence, as much as he would hate the cliché, he was the father of us all. No wonder that the immediate reactions to the awful news, from every direction, transmitted a single feeling: orphanhood.”

And in New York, the Israeli-born author and arts critic Liel Leibovitz began a lyrical essay in the online journal Tablet with these harsh words: “I have nothing to say to you about Arik Einstein. I’m sorry to sound like a pr**k, but you wouldn’t get it.”

The thing that was hardest for an outsider to get about Einstein was his essential Israeliness. Those of us who didn’t grow up in Israel but came to it as adults, or watched it from afar, could see but not really feel what he meant to young Israelis in the state’s early years. Only by immersing yourself in Israel’s daily life for years could you feel his presence.

Born to a theater family in Tel Aviv in 1939, active in his teens in the socialist-Zionist youth movement Hashomer Hatzair, he did his military service in Lahakat Ha-Nahal, the entertainment troupe of the kibbutz-based Pioneering and Fighting Youth Corps. The Nahal troupe was just then emerging as the incubator of a generation of top Israeli pop stars, and young Einstein was the biggest.

Entering the Tel Aviv arts scene in the early 1960s, he worked as a comic actor as well as a singer, forming and dissolving a series of acclaimed but short-lived bands and appearing with friends in a handful of memorable, Beatlesque films and television shows. He released his first solo album in 1966. By 1970 he was Israel’s superstar, and remained so.

Tall and lanky, golden-throated, handsome in an everyman sort of way, the Arik Einstein persona that evolved in those early years was the face of a new, carefree generation emerging from the austere, disciplined Israel of the founders. There had been fun-loving hedonists in Tel Aviv before, bohemians like Dahn Ben-Amotz and Uri Avnery, rebels against the strait-laced mainstream. Einstein and his comrades, by contrast, became the new mainstream.

“Einstein was the embodiment of the new, liberal, secular Israel that we once thought we would be,” Chemi Shalev wrote in Haaretz. “… He was the antidote to arrogant generals, the antithesis of pompous politicians, the polar opposite of crass capitalists and manipulative machers. He was no heroic kibbutznik, no daring commando, no pretentious preacher or dogmatic fanatic. He was unencumbered by history, unburdened by Jewish suffering, undaunted by the bombastic ideology of his elders and peers.”

His songs, some from his own pen, many others written for him, were mostly quiet ballads about love, family and day-to-day life. Asked once to describe his music, he said it’s “mostly quiet and introspective, because I didn’t want to disturb the neighbors.”

Most of his albums are set pieces, each one composed and arranged by a single composer, usually drawn from a handful of friends he worked with repeatedly. His stylings evolved over the years. But the albums kept coming, year after year, and they remained best-sellers. As recently as 2010 he was still the most-played artist on Israeli radio.

As quintessentially Israeli as he was, he was also one of the very few Israeli pop favorites — Chava Alberstein and the Poogy group are others — whose work is widely known among Diaspora Jews. “Ani ve-Ata” (“You and I will change the world”) has been sung by fans all over the world since it was first released in 1970. “Uf Gozal” (“Fly away, little nestling”), released in 1987, has become a standard fixture at Jewish summer camps and in day school graduation ceremonies.

Einstein’s life took a dramatic turn in 1982. He suddenly stopped performing in public. He remained active for the next three decades, right up to his death, writing, recording, chatting with friends at his favorite shwarma joint on Ibn Gvirol Street. But he never again faced fans and rarely spoke to reporters. The one exception was a memorial concert for Yitzhak Rabin in 1995. He’d been in a serious car accident in the summer of 1982. It took him months to recuperate, and his eyesight, never strong, was severely impaired. His next few albums were named “Shavir” (Fragile), “Pesek Zman” (Time out) and “Ohev Lihiyot Babayit” (I like being at home).

He told occasional interviewers that he was “not built” for public life, that he was unsettled by crowds and embarrassed by adulation. In a 2008 radio interview discussing his upcoming 70th birthday, he said he “couldn’t” attend a scheduled fundraiser in his own honor, half-jokingly describing what sounded like agoraphobia and even offering to “bring a doctor’s note.” There were disappointments as well. Some acquaintances said Israel was no longer the country he’d celebrated and sung about, with its rough pioneering past and the light-hearted optimism of his own early years. It was faster moving, less idealistic, less liberal and secular.

Some of the change was quite personal. In the late 1970s his best friend and longtime performing partner, Uri Zohar, gave up show business and became an Orthodox rabbi. Not long afterward his ex-wife also became religious, along with his two daughters by that first marriage. The daughters went on to marry two of Zohar’s sons. In his later years Einstein would comment wryly, and with obvious mixed feelings, that he was bewildered to find himself with 40 grandchildren. It was a role he’d never anticipated.

He may have hinted at his incipient melancholy back in 1973, in a song on his first “Good Old Eretz Yisrael” album. It’s the one song on the album that isn’t a tale from Israel’s olden times. Written for him by his friend Yehonatan Gefen, it’s titled “Yachol Lihiyot Shezeh Nigmar”—“Maybe it’s all over”: “They say it was happy here before I was born, and everything was wonderful until I arrived. A Hebrew watchman on a white horse in the dark night. By the shores of Lake Kinneret Trumpeldor was a hero. Little Tel Aviv, red sands, one Bialik … Once, they say, there was a lovely dream here. But when I came to see, I didn’t find a thing. Maybe it’s all over.”

In death Arik Einstein leaves behind a body of work that will continue to provide the soundtrack of Israeli life, as Prime Minister Netanyahu put it. But he also leaves behind a silent rebuke, and an unanswered question about Israel’s past and future. As he sang in one of his most heart-rending recordings, “Ve’ulai” (“And Perhaps”) by the poetess Rachel: “Were you real, or did I dream a dream?”

(A selection of Arik Einstein music videos is posted on my blog, https://forward.com/opinion//)