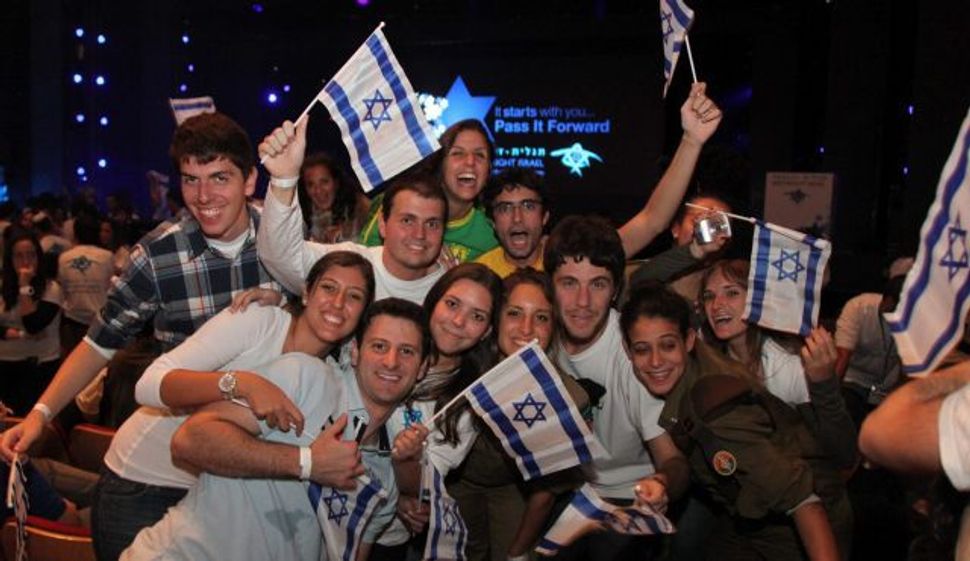 (Haaretz) — Concerned about declining interest in its free 10-day trips to Israel, Taglit-Birthright has hired a marketing agency to seek out new participants, targeting college students with little or no connection to the Jewish community.

According to figures obtained by Haaretz, registration among North American Jews for Birthright’s summer trips dropped by more than 17 percent between 2011 and 2013. This followed a consistent upward trend ever since the program was launched 14 years ago.

The precise reasons for the downturn are unclear, but sources in Jewish organizations say Birthright might be close to maximizing its traditional candidate pool of affiliated or moderately affiliated young Jews.

Mr Youth, the marketing and social media agency hired by Birthright, has been instructed to widen the circle of potential candidates by targeting a group described as “low affiliated” young Jews. Loosely defined, these are young adults with at least one Jewish parent who have little or no formal connection to the Jewish community. As a result, they’ve escaped Birthright’s reach.

“Thanks to their campaign, we’re expecting a record number of participants in Israel this summer,” said Birthright CEO Gidi Marks. Although Birthright draws participants from dozens of countries around the world, the overwhelming majority – more than 80 percent – hail from North America.

The number of North Americans registered for summer 2014 trips rose by almost 20 percent from last year to 39,723. The summer trips are the main draw for Birthright participants, as they tend to coincide with vacation from studies and work.

Mr Youth representatives were dispatched to 40 large U.S. campuses as part of the recruitment campaign. Titled ”Hello Israel,” the campaign highlights what Marks describes as the fun aspects of a trip to Israel, featuring posters of participants in bathing suits gallivanting at the sea.

Marks said he believed that by tapping into the market of “low affiliated” young Jews, the participation numbers would continue rising. This group of potential applicants account for about 60 percent of all young Jews in North America, he said.

Until now, Birthright has relied on its 14 certified trip organizers to recruit candidates, as well as word of mouth.

“We decided to hire a marketing agency because now we’re going into areas where we haven’t been before,” said Marks. “These are young Jews whose names don’t appear on the usual listservs and who aren’t connected to Judaism via social media.”

Figures on actual participation in Birthright trips in recent years do not reveal as sharp a downturn as do the registration figures. Many participants have been old applicants who were wait-listed several years back, and all those on waiting lists have since been accommodated.

In another step aimed at boosting participation numbers, Birthright recently commissioned a survey to determine the main reasons “low affiliated” young Jews were slow to sign up for its trips and how best to overcome this resistance.

The poll, conducted late last summer by the Washington-based Benenson Strategy Group, was based on more than 800 online interviews with 18-to-26-year-olds who identified as Jews, had at least one Jewish parent or were raised Jewish. It screened out Jews who attended Jewish day schools or high schools, paid membership dues at a synagogue or belonged to a Hillel or other Jewish organizations.

The survey found that these less affiliated Jews had not enrolled in Birthright amid concerns it would be too religious for them or push pro-Israel propaganda. More than half the respondents cited these two issues. Other key concerns were safety and lack of time.

Anticipating a change in the profile of participants in the coming years, Birthright is also rethinking the content of its trips. The plan is to put greater emphasis on modern Israel and less on history and religion, Marks said.

Today, each tour operator is required to provide three hours of content during the 10-day trip that pertains to modern Israel, choosing from activities linked to technology and business, the environment, arts and culture, and government and politics.

“Now we’re going to intensify that part of the trip,” said Marks. “My goal is to triple or quadruple the amount of time on modern Israel.”

Although North America is its main target market, Birthright is also actively recruiting candidates in two other hubs: the former Soviet Union and France. To this end, it recently hired the Israeli agency Tel Aviv Moscow Advertising to help boost participation numbers in Russia and Ukraine.

Birthright is also increasing funding to enable more candidates from France to come on the trips. To date, participation in France has been low, mainly because local Jewish organizations lack the funding to finance the trips.