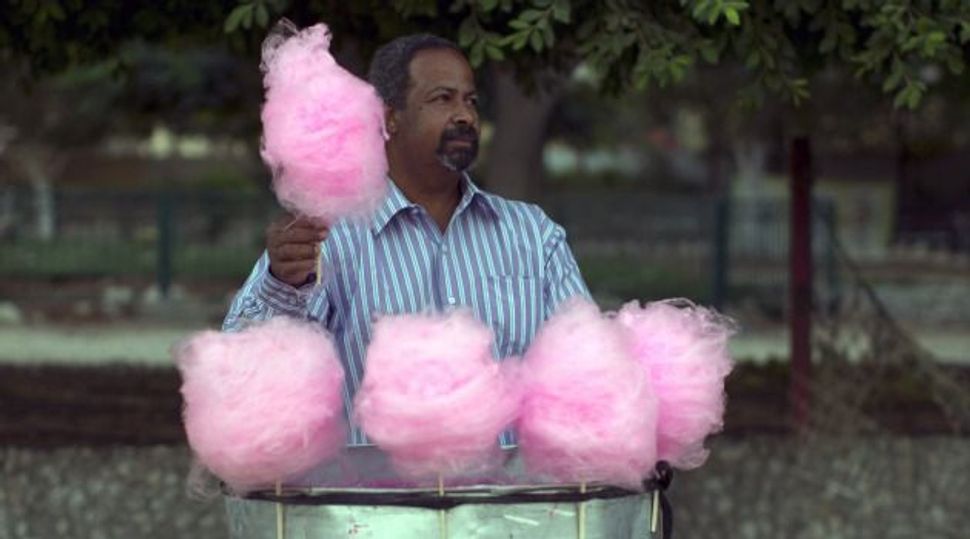 Salad Days? A Palestinian vendor hawks cotton candy. Will the relative calm on both sides of the Green Line persist now that the peace talks are dead. Image by getty images

With even the illusion of a peace process now dead, experts’ predictions of what will fill the vacuum range from a new intifada to continued peace and prosperity for Israel.

Israel is, in other words, now on untested ground, and what the future holds is anyone’s guess.

Still, some of those guessing about the new situation are known for thinking about Israel’s future deeply and seriously.

And among those trying to peer around the corner, few see the situation in more bleak terms than the Knesset faction chairman of Israel’s second-largest party.

“Our sliding down the slippery slope of international illegitimacy will be faster and will become a real danger to our economy, science and culture,” Ofer Shelah of the Yesh Atid party told the Forward. The developments to come, he predicted, would affect “every facet of Israeli life.”

“Once there’s no process and the situation on the ground deteriorates, the money will not be there, the authority to govern will not be there — it will crumble and crumble fast,” he said. That, in turn, “will bring us back to being actual day-to-day rulers of close to 2 million Palestinians, which is harmful to everything — to our economy, to our consciousness, to our morality, to everything.”

Moshe Maoz, a well-known Hebrew University Middle East scholar, broadly agreed, terming the outlook “very grim.” “In a worst-case scenario, there could be a third intifada,” he said. And if there is one, he added, “it could be the end of the Palestinian Authority.”

The breakdown in the peace process “is going to influence international organizations and bankers, et cetera,” Maoz said. “There were expectations, and they will blame Israel for a collapse.”

On the opposite end of the spectrum sits Yoaz Hendel, a prominent military historian and former director of communications for Israeli Prime Minister Benjamin Netanyahu. Hendel told the Forward, “I think we’re in the same place as two years ago and one year ago.”

Hendel, who believes that a two-state solution based on 1967 borders isn’t achievable, added, “Maybe [the collapse of talks] will actually help us by creating a more realistic picture.” He thinks that it could be taken as a juncture for the world to get its head around alternative ideas.

Ely Karmon, a senior researcher at the Institute for Counter-Terrorism at the Interdisciplinary Center in Herzliya, also rejected the pessimists’ scenario. “I don’t see an immediate impact on the average Israeli,” he said.

Karmon rejected predictions of Palestinian violence. “I don’t think that in the near future there will be an intifada,” he said. “The Palestinians see what happened [with instability] in Egypt and Libya. They will now play the diplomatic and political cards.”

But that does not mean Israel will go unchallenged, Karmon warned. The reconciliation agreement announced on April 23 between Fatah and Hamas, the two major — and antagonistic — Palestinian factions, dominating the West Bank and Gaza Strip, respectively, will mean a unified effort to put Israel on the defensive in world opinion, he said.

“The two of them will probably try to use popular resistance — demonstrations — to challenge the [separation] fence,” Karmon said. The barrier, which Israel has constructed ostensibly to protect its citizens from Palestinian terrorists, also plunges frequently into the West Bank to encompass Israel’s Jewish settlements, there, whose presence the Palestinians reject. There will be, Karmon said, “attempts to ‘break in’ through the barrier and so on — and then, if there is a violent response, accuse Israel of harming civilians.”

The other major challenge that will emerge with the death of the peace process will be the activities of Israeli Arab citizens of Israel, Karmon said, in particular the Islamic Movement. He pointed to clashes in April between Arabs and police on the Temple Mount in Jerusalem. Tensions have run high there recently, as right-wing Jews ascend with increasing regularity to the Dome of the Rock and Al-Aqsa mosque areas, which are under long-standing Muslim control. Hard-line Muslims galvanize supporters by claiming that Israel plans to raze the Islamic sites, which are among the most sacred for Muslims worldwide.

Amid these tensions, “the Israeli Islamic Movement is very much involved and is less constrained than the Palestinians of the West Bank, as they are part of the Israeli state,” Karmon said. “They are able to prepare all sorts or provocations more easily than Palestinians.”

Mohammad Zeidan, of the Arab Association for Human Rights, also fears that dynamics with Israeli Arabs could be cause for concern. He said that Arab frustration about the breakdown in negotiations could combine with anger about so-called “price tag” attacks launched by hardcore right-wing Jews against Arab targets and lead to violence. “If Israel does not do anything against this [price tag] phenomenon and the security forces do not investigate properly, people will try to protect property and mosques themselves and this could lead to violence,” he warned.

There are few clear ideas in circulation at the moment for how to get the peace process back on track, but Karmon has a suggestion: He thinks that Jerusalem should unilaterally stop settlement building for a year and free Marwan Barghouti. An imprisoned leader of the second intifada, Barghouti is consistently the most popular choice for Palestinian president in opinion polls and has long been considered by Israel doves to be a potential peace partner.

After these two steps, Israel should “see what happens” with the hope that the Palestinians will become better disposed to talks.

Hendel, on the other hand, wants to see an interim arrangement that would establish a Palestinian state in about half the West Bank, with Jewish West Bank settlements annexed to Israel, and outstanding issues discussed once the interim deal is in force.

Maoz saw this idea as more of a problem than a solution. Netanyahu’s vision is actually to create Palestinian “Bantustans,” he said, by which he means fragments of Palestinian self-control within Israeli-occupied territory. “This is Bibi’s plan,” he said, “and he implements it piecemeal.”