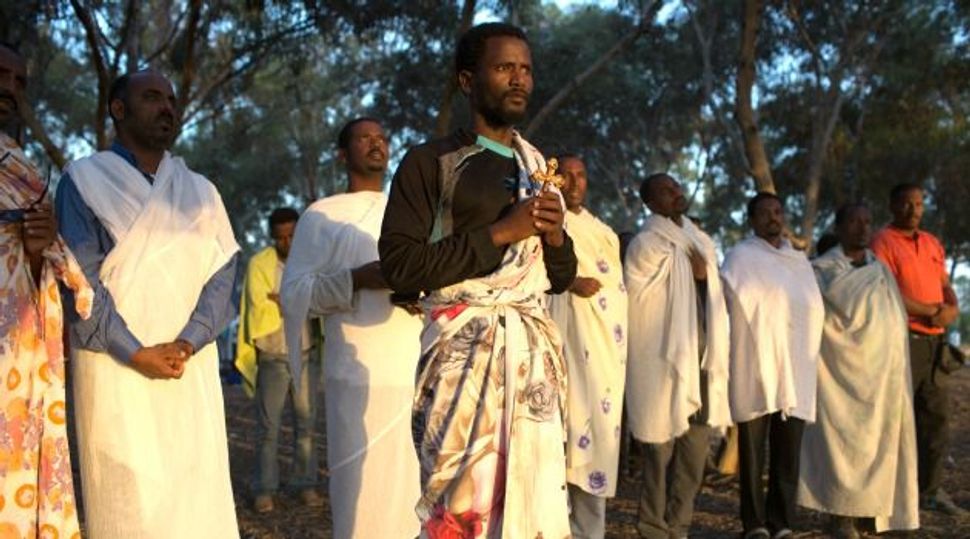 Let My People Come: African asylum seekers pray after spending the night in an outdoor camp near Nitzana border crossing with Egypt in the Negev Desert. Image by Getty Images

More than 1,000 illegal African migrants have been camping out near the border with Egypt to protest their treatment in Israel.

The migrants walked out of Israel’s Holot detention center on Friday, and attempted to cross into Egypt, according to reports. The Israel Defense Forces prevented them from crossing the border.

The migrants, mostly from Eritrea and Sudan, live in the open detention facility, meaning they have freedom of movement but must check in three times a day, including for the last time at 10 p.m. They may not hold down jobs. Some 2,300 migrants live in the facility.

They are protesting the, in some cases, years-long wait for processing of their asylum requests. Israel has worked to find other third countries in which to resettle the migrants and has offered them case to return to the countries of origin.

“The Holot center is illegal because it violates our rights to liberty, freedom and to life, which are considered fundamental human rights,” protesters said in a statement. “We decided to leave Holot and go to the Israel-Egypt border. We have no more tolerance to stay in prison, and we call on the international community to take care of us.”

The migrants have called on the United Nations to resettle them in another third country.

More than 50,000 African migrants have infiltrated into Israel in recent years from Egypt, though a recently erected security fence has kept more of them out. While some of the migrants are fleeing persecution in their native countries, many are looking for jobs.